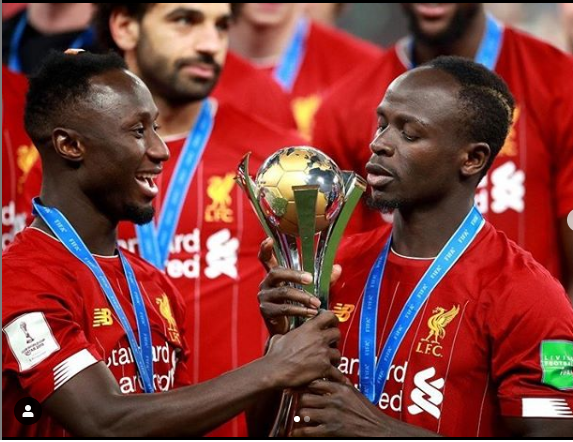 Salah published a picture of Mane while holding the prize on a story on his official Instagram account with the caption “Congratulations brother.”

Sadio Mane was named African Player of the Year for 2019 on Tuesday after winning the Champions League with Liverpool and leading Senegal to the Africa Cup of Nations final.

Mane scored 26 goals in all competitions last season and won the Premier League Golden Boot award in 2019 with 22 goals, alongside his teammate Salah and Arsenal’s Pierre-Emerick Aubameyang

The Confederation of African Football (CAF) announced in December 2019 the final list of candidates for the African Player of the Year award, which included Salah, who came in second place, and Algeria Riyad Mahrez, who came in third.

The winner was announced during a ceremony held on Tuesday for the first time in Egypt in the Red Sea coastal city of Hurghada, in the presence of a number of prominent African football legends.

The CAF awards celebrate African footballers and officials, and the list of nominees is compiled by a panel of media and technical professionals, the CAF said.

Video: Mo Salah shortlisted for Liverpool’s Goal of the Decade