Bunny Drueke, the mother of one of the Americans captured in Ukraine, said she is putting her trust in the US State Department to bring the two men back home.

Who are the Americans? US citizens Alexander John-Robert Drueke, 39, from Tuscaloosa, Alabama, and Andy Tai Ngoc Huynh, 27, from Hartselle, Alabama, were taken into detention by Russian-backed separatists in Donetsk after being captured last week, according to Russian state media. They went missing on June 9 during a battle north of Kharkiv.

Speaking to CNN’s Jake Tapper on Monday, Bunny said she had watched some of the videos that have appeared in Russian media of her son. CNN has chosen not to broadcast the videos because they show him speaking under duress.

“The one where he addressed me directly really made me happy. I play it over and over and over again. Especially right before I go to bed. It’s just wonderful to hear his voice and see him,” she said.
“I have chosen not to look at those other videos because they are propaganda. Before Alex left, he told me that he needed to speak very directly and frankly with me, that if he were captured, they would be forcing him to make statements. I was not to believe anything except ‘I love you, mom’.”

Bunny said US officials told her they are “working behind the scenes” and arranging for “Alex and Andy to come home eventually.”

“They’re still working at verifying where they are and who has them,” she said.

Asked what message she would send to her son, Bunny said: “I would like to tell Alex that I’m taking good care of his dog and that I’m being brave and doing exactly what he asked me to do. And that I love him with all of my heart.” Maximum weather temperatures to reach 36C in Cairo on Saturday 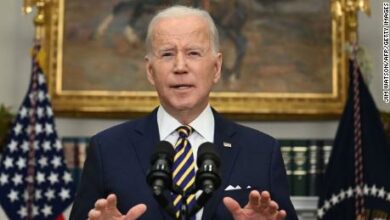 Inside the quiet US diplomacy to tamp down tensions with Saudis, UAE — and ramp up oil production