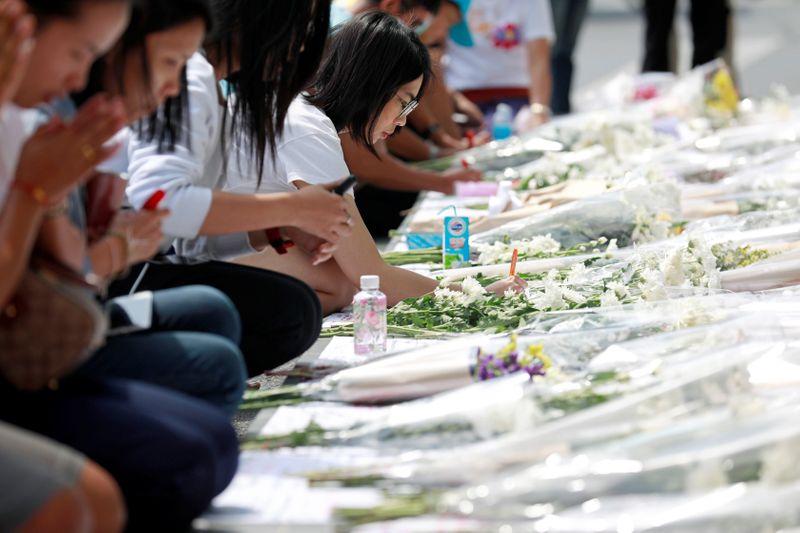 NAKHON RATCHASIMA, Thailand (Reuters) – Mourners left flowers and written messages in front of the Terminal 21 shopping center in northeastern Thailand on Monday after a soldier’s shooting rampage in which at least 29 people were killed.

Soldiers, mall staff and volunteers cleaned bloodstains from the front of the mall in the city of Nakhon Ratchasima, while others laid wreaths.

“Even though they are not my relatives or someone I know, but just walking by, I don’t feel okay with what happened,” said Thanaphorn Tongweraprasert, 29, who lives near the mall.

A candlelight vigil was held on Sunday night as Buddhist monks led prayers and people laid down white flowers in memory of the victims of the attacker, who hit four locations around the city.

“You have this rage, it fills you,” said resident Chirathip Kurapakorn at the vigil.

“It just happened right here in our hometown behind us, like right in our heart of everything. It’s just tragic.”

Many of those killed in the weekend attack were at the shopping center, the last stop for the soldier, who held out against an overnight siege with weapons stolen from his army base before being shot dead by security forces on Sunday.

The soldier, angry over a real estate deal gone awry, began his rampage by killing his commanding officer at a private home on Saturday.

He moved on to his military base, where he killed a guard and stole high-powered weapons and ammunition from the armory, and then fled in a stolen Humvee to a Buddhist temple, where he killed nine people before driving to the Terminal 21 mall.

At least 29 were killed and 57 wounded in total.

US to send home some Saudi military students after shooting

Walmart to keep selling guns despite recent shootings at its stores