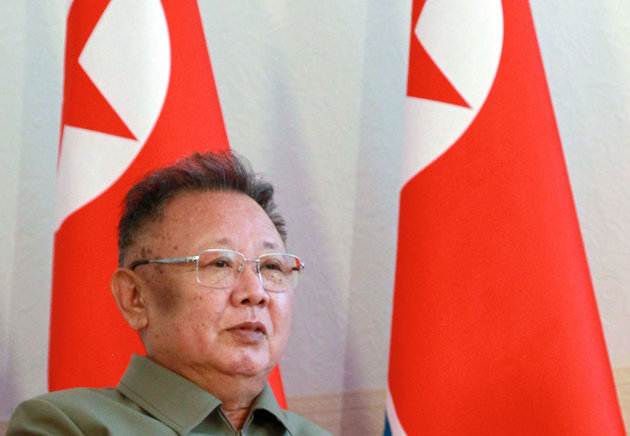 was in seclusion on Tuesday, a day after it announced the death of its leader Kim Jong-il, as concern mounted over what would happen next in the deeply secretive nation that is trying to build a nuclear arsenal.

While Secretary of State Hillary Clinton urged North Korea to follow a "path of peace," diplomats and commentators were struggling to understand what would happen as it transitions from the 17-year iron rule of Kim Jong-il, 69 years old when he died, to that of his untested son, in his late 20s.

New ruler Kim Jong-un paid respects to his father who lay in state in the capital of Pyongyang ahead of a 28 December funeral after North Korean media reported he had died on Saturday.

North Korean media lauded Kim Jong-il as the "Great Father of the People" and reported that he had made several public appearances in the past week.

Pyongyang has said foreign officials will not be invited to the funeral.

Jong-un, the youngest son and successor to the ruling dynasty started by his grandfather, was described as the "eternally immovable mental mainstay of the Korean people" by KCNA.

In a sign the hermit state was sealing itself off from the outside world even more after the "Dear Leader's" death, few people crossed the Dandong border with China. China is the North's only major ally and one of the few states with which it actively trades.

"We can't go in now, because of the death of Kim Jong-il," Yu Lu, a Chinese trader in Dandong who does business with the North, told Reuters. "It's all closed off, and basically all the North Koreans are heading back. It's very tightly closed today."

However, it was not clear if the border was officially closed.

Chinese business people in Dandong said that while it was still possible to travel across on Tuesday, many were canceling trips, fearing the border could be closed.

"We're worried that it could be shut down at any time, because of the mourning activities, and nobody wants to be stuck in North Korea with the border closed," said Yu Lu.

The elder Kim was reported to have died on Saturday of a heart attack, prompting South Korea — with whom the North remains technically at war after a 1953 armistice ended a conflict — to put its forces on full alert.

South Korean media reported that the North test-fired at least one short-range missile on Monday, sparking a fresh round of tension, although government officials in Seoul said they did not necessarily believe the launches were linked to Kim's death.

Seoul was calm on Tuesday, a sunny winter day, and there appeared to be no sense of any crisis.

One Chinese businessman with close links to North Korea, who could not be identified due to the sensitive nature of his relationship with the Pyongyang elite, said that the Wongjong border crossing with Russia was open, but that no one was using it to enter the country.

"[As] many foreigners are leaving as possible," he said.

US hoping for peace

North Korea, with one of the largest armies in the world, has been recently trying to re-engage the United States in a bid to win food aid. But there has been little progress.

The United States, a close ally of South Korea, wants North Korea first to abandon its attempts to become a nuclear weapons power.

"It is our hope that the new leadership of [North Korea] will choose to guide their nation onto the path of peace by honoring North Korea's commitments, improving relations with its neighbors, and respecting the rights of its people," Clinton said in a statement.

"The United States stands ready to help the North Korean people and urges the new leadership to work with the international community to usher in a new era of peace, prosperity and lasting security on the Korean Peninsula."

The question remains, however, as to who is actually running the North. While Kim Jong-un may be the anointed heir and the third of his dynasty to rule the state, there are other powerful players.

Jong-un has had only since 2009 to prepare for leadership, whereas his father had more than a decade under the tutelage of his father and founder of North Korea, Kim Il-sung.

Key stakeholders around Jong-un are Jang Song-thaek, the husband of Kim Jong-il's sister Kim Kyong-hui, herself a powerful player at the court in Pyongyang.

"People have been speculating that Kim Jong-un will be serving as a sort of figurehead while Jang Song-thaek is the experienced leader who would actually be in charge, along with his wife," said Jennifer Lind, a Korea specialist and assistant professor at Dartmouth College.

"So that's the situation that people suspect, but it's hard for us to confirm just how active a role either Kim Jong-un or his uncle Jang will be playing as a leader."

South Korean workers from the Kaesong industrial complex in the North, where South Korean businesses have factories, are expected to start coming home on Tuesday.

Close to the border, life in the vibrant and prosperous South, the world's 13th largest economy, appeared to be going on as normal. Few saw Kim's death as particularly worrying.

"I don't think any crisis will happen because veteran soldiers are advising the young Kim. Even if he wants to provoke, they will persuade Kim not to do," said Oh Seok-hyun, a 84-year-old retired soldier who fought in the Korean war.

"We are, I think, still safe because we have the Eighth United States Army," said Oh, a tourist at the "unification observatory" in the South Korean city of Paju, 3km from the fortified border.