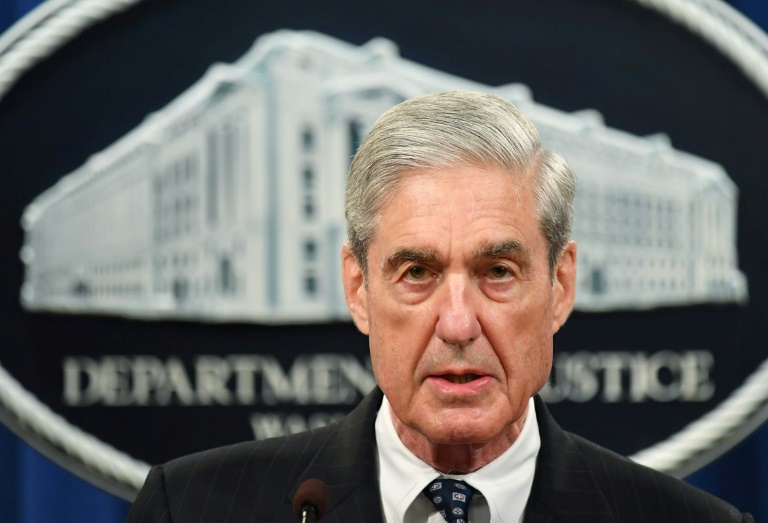 Robert Mueller said Wednesday his two-year Russia investigation had not exonerated Donald Trump, but that he had lacked the power to charge a sitting president — passing the baton to Congress where a growing chorus is clamoring for impeachment.

Making his first public statement on the high-stakes probe into Moscow’s interference in the 2016 election, the special counsel said longstanding Justice Department guidelines prevented him from charging Trump, despite at least 10 possible acts of criminal obstruction by the president.

But not indicting Trump was not equivalent to clearing him, Mueller said, suggesting Congress has both the constitutional powers and the responsibility to pursue the case.

“If we had had confidence that the president clearly did not commit a crime, we would have said so,” he said.

AFP/File / Brendan Smialowski President Donald Trump, who has assailed the Russia investigation as a treasonous “witch hunt” and a “hoax,” declared the case over minutes after Robert Mueller finished speaking

“Nothing changes from the Mueller Report. There was insufficient evidence and therefore, in our Country, a person is innocent,” the president tweeted minutes after Mueller finished speaking.

“The case is closed! Thank you.”

But Democratic Senator Elizabeth Warren was one of half a dozen White House hopefuls who seized upon Mueller’s remark, to urge Congress to impeach Trump.

“Mueller leaves no doubt,” she tweeted. “The Constitution leaves it up to Congress to act — and that’s impeachment.”

‘No option’ to charge president

The taciturn Mueller took to the podium to clarify his original conclusions more than two months after a summary of his report was first released by the Justice Department.

“Russian intelligence officers who were part of the Russian military launched a concerted attack on our political system,” forming the basis for the investigation, said the 74-year-old, long one of the most respected members of the Washington justice establishment.

But in the end, Mueller said, “There was insufficient evidence to charge a broader conspiracy” of collusion.

As for the obstruction side of the investigation, Mueller explained that from the outset, charging Trump with any federal crime “was not an option that we could consider.”

According to Justice Department policy, he said, “a president cannot be charged with a federal crime while he is in office. That is unconstitutional.”

That left the public to parse the head-scratching, double-negative conclusion that Mueller’s team could not say that the president did not commit a crime.

“The report was clear — there was no collusion, no conspiracy — and the Department of Justice confirmed there was no obstruction,” said White House Spokeswoman Sarah Sanders.

“After two years, the special counsel is moving on with his life, and everyone else should do the same.”

Mueller made clear, though, that he thought it was up to Congress to pursue the case further.

“The constitution requires a process other than the criminal justice system to formally accuse a sitting president of wrongdoing,” Mueller said.

AFP / MANDEL NGAN Stepping down: Mueller leaves after speaking on the investigation into Russian interference in the 2016 presidential election

Mueller’s statement, and his announcement that he was resigning as special counsel to return to private life, piled heavy pressure on Nancy Pelosi, the Democratic leader in Congress, to seriously consider launching the impeachment effort against Trump.

Pelosi has fended off the idea, which would be fraught with political risk for the party 18 months ahead of presidential elections.

She said in a statement that Congress would step up investigations, while avoiding the word impeachment.

“The Congress holds sacred its constitutional responsibility to investigate and hold the President accountable for his abuse of power,” she said.

“The American people must have the truth.”

‘No one is above the law’

Democratic Congressman Jerry Nadler, Chairman of the House Judiciary Committee which would take the lead in any impeachment effort, also avoided the “I” word while saying he would push ahead with a probe.

His committee has subpoenaed Mueller probe witnesses, but Mueller said he himself is averse to testifying because the report speaks for the investigation.

House Intelligence Committee chairman Adam Schiff said he can understand such reluctance, but that there are still “a great many questions he can answer that go beyond the report” and Congress looks forward to Mueller’s testimony.

It therefore falls to Congress to respond to “the crimes, lies and other wrongdoing of President Trump,” he said.

When asked whether that meant pushing ahead with impeachment, Nadler replied: “All options are on the table and nothing should be ruled out.”

Trump would have faced obstruction charge if not president: ex-prosecutors