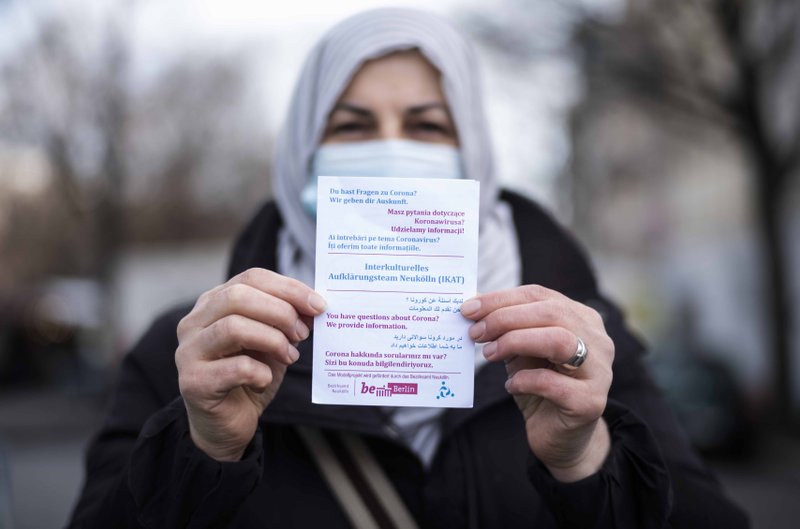 The 48-year-old Turkish immigrant who speaks four languages is part of a team of five street workers enlisted to explain the dangers of COVID-19 to people often not reached through traditional channels in an area where infection numbers have regularly been among the highest in the city.

“Especially the older immigrants don’t understand German, some are illiterate, and some are still not aware of the health risks and regulations regarding the pandemic,” Tuerkyilmaz says as she roams through a Turkish market along the Landwehr canal where many had come to pick up fresh vegetables, chicken and bread.

There are a combination of factors that have made Neukoelln a virus hotspot in Berlin, where low incomes mean that living quarters are often cramped, public transport is frequently the only option, and jobs are commonly in high-risk areas such as the food service industry.

But it was the lack of information making it to the residents that prompted the formation of Tuerkyilmaz’s “intercultural educational team,” or IKAT, in September by the Berlin NGO Chance BJS in coordination with district officials.

The hope is that they will be able to break through the lack of communication, which not only has to do with language barriers but also a deep distrust of German authorities fed by a sense of nonacceptance, says Kazim Erdogan, a community leader with Turkish roots.

“If we can’t create a sense of belonging together in normal times, if people are existing next to or even against each other, then it is not possible to create this sense of togetherness now,” Erdogan says.

Around 35% of Berlin’s 3.6 million residents have immigrant roots, primarily from Poland, Turkey, Arabic countries and the former Soviet Union. In Neukoelln, almost half have a foreign background.

A study published by the Berlin state health authority in February indicated the hardest-hit districts were those with more unemployment, a greater share of welfare recipients and lower household income. The incidence of COVID-19 also rose in line with the percentage of people with a family history of migration and greater population density — factors that are linked to poverty.

“Migration is not the main reason for a higher risk of catching the virus, but it is an additional one,” said Nico Dragano, a professor of medical sociology at the Heinrich-Heine University of Duesseldorf, who has been studying the disproportionally strong impact of the pandemic on underprivileged parts of society.

Lacking information early on in the pandemic, many immigrant communities stuck to cherished traditions like big weddings and extended family meals in their small homes, which helped contribute to clusters of outbreaks, said Erdogan, the Neukoelln community leader.

“Among my friends, there were also 20 people who got infected from one family,” Erdogan said. “They were at a celebration and didn’t take the challenges seriously — it came back to haunt them.”

More than 135,000 people in Berlin have been reported to have caught the coronavirus, though the estimated number of unreported cases is higher, and about 3,000 people have died.

While Neukoelln was one of the city’s main virus hot spots last summer, its latest number of cases — 75.5 new infections weekly per 100,000 residents — is on par with the city’s current average of 75.1.

It’s too early to say how much initiatives like the multilingual street workers’ team have contributed to bringing down the virus numbers, but district mayor Martin Hikel said that anecdotally, unconventional ways of communicating with Neukoelln’s diverse immigrant communities have been important.

Beyond the IKAT team, Neukoelln has sought to rectify that through other initiatives as well.

City workers have painted basic rules of conduct during the pandemic — such as mask regulations — directly on sidewalks in bold letters and different languages. They’ve also created short multilingual videos detailing the risks of COVID-19 that feature different community leaders — including Erdogan — which can easily be shared on Facebook or via messenger services on smartphones.

“We try to spread the word on social media, through social workers and local associations,” Hikel said, adding that local authorities are often a step ahead of state and federal officials with their outreach methods because they are more aware of the reality on the ground.

Izabella Grajkowski, a 34-year-old IKAT member with Polish roots, said people have generally been open when she approaches them in the streets.

She attributes the success of IKAT’s outreach work also to the fact that all members are immigrants themselves and can draw on that experience as they talk to people. They also help translate for those who have in-depth medical questions for a doctor who often joins IKAT outings and offers on-the-spot antigen tests for those who fear they’ve contracted the virus.

“We all have different cultural backgrounds ourselves and we connect well with the people of Neukoelln,” she said.

Topics of most concern to people are the re-opening of schools, stores and restaurants, whether they are allowed to travel abroad to visit relatives, and when and how they’ll be able to get vaccinated.

“The elderly have already been getting invitations for the vaccinations explaining how to register online,” said Tuerkyilmaz. ”But everything is in German only — they don’t understand it and don’t know what to do. It’s difficult.”

Frank Jordans contributed to this report.

Image: Aliye Tuerkyilmaz a member of a multilingual team of five street workers shows an information flyer as she poses for a photo in Berlin, Germany, Tuesday, March 9, 2021. Three times a week, Aliye Tuerkyilmaz hits the markets and busy shopping streets of Neukoelln, the German capital’s crowded immigrant neighborhood that’s studded with minarets, kebab stores and hookah lounges. The 48-year-old Turkish immigrant hands out flyers informing about the coronavirus pandemic and tries to connect with other immigrants in one of the four languages she speaks. Tuerkyilmaz belongs to an multilingual team, a group of five street workers trying to explain the dangers of COVID-19 to those who are often not reached through other efforts by the authorities. (AP Photo/Markus Schreiber)