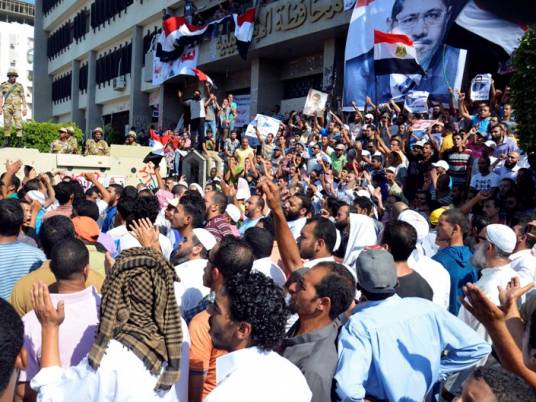 The Muslim Brotherhood is continuing to organise protests with fresh calls for a million-man demonstration on Tuesday dubbed "It's the coup that is terrorism."

Protests will be held across Egypt, along with press conferences "to uncover the crimes committed by the perpetrators of the coup," the group announced.

In a statement the National Alliance in Support of Legitimacy said its supporters in Europe have documented crimes committed by leaders of the "3 July coup," and are planning to submit them to the International Court of Justice.

Supporters are also making efforts to turn the tide of public opinion, stressing that Egypt has witnessed a coup and not a revolution, the alliance stressed.

The alliance called for expanding the scope of its campaign of "peaceful civil disobedience," which includes breaking the curfew, claiming the armed forces were forced to shorten it under pressure from ordinary Egyptians.

The alliance's statement failed to mention the 50-member committee tasked with helping draft a new constitution for Egypt, as endorsed by interim President Adly Mansour in the wake of Mohamed Morsy's overthrow.