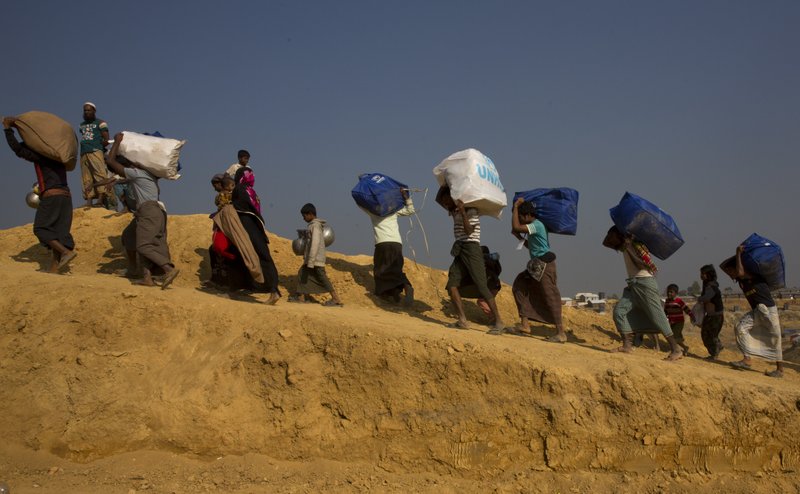 YANGON/COX’S BAZAR, Bangladesh (Reuters) – Myanmar officials said on Sunday the country was ready to receive more than 2,000 Rohingya Muslims sheltering in Bangladesh on Nov. 15, the first group from 5,000 people to be moved under a deal between the neighbors struck last month.

But more than 20 individuals on a list of potential returnees submitted by Bangladesh have told Reuters they will refuse to go back to northern Rakhine state from where they fled. Bangladesh has said it will not force anyone to do so.

The United Nations also says conditions are not yet safe for their return, in part because Myanmar Buddhists have been protesting against the repatriation. The UN’s refugee agency said late on Sunday that Rohingya refugees should be allowed to go and see the conditions in Myanmar before they decide to go back.

“It depends on the other country, whether this will actually happen or not,” Win Myat Aye, Myanmar’s Minister for Social Welfare and Resettlement, told a news conference in the commercial capital of Yangon on Sunday, referring to Bangladesh.

“But we must be ready from our side. We have done that.”

Abul Kalam, Bangladesh Relief and Repatriation Commissioner, said he was hopeful the process could begin on Thursday.

“The return will be voluntary. Nobody will be forced to go back,” he told Reuters.

The countries agreed on mid-November for the start of repatriating some of more than 700,000 Rohingya Muslims who fled a sweeping army crackdown in Myanmar last year.

They say soldiers and local Buddhists massacred families, burned hundreds of villages, and carried out gang-rapes. UN-mandated investigators have accused the army of “genocidal intent” and ethnic cleansing.

Myanmar does acknowledge the killing of 10 Rohingya by security forces in Inn Dinn village. Reuters reporters Wa Lone and Kyaw Soe Oo were sentenced to seven years in prison earlier this year for allegedly breaking the country’s Official Secrets Act after reporting on the massacre.

Reuters says the court’s ruling was wrong and lawyers for the two have appealed against their conviction.

The United Nations High Commissioner for Refugees called for Myanmar to allow Rohingya refugees to visit their places of origin or resettlement sites to make their own “independent assessment of whether they feel they can return there in safety and dignity”.

“Myanmar authorities should allow these refugees to undertake such go-and-see visits without prejudice to their right to return at a later date,” the agency said in the statement late on Sunday.

Win Myat Aye said preparations had been made for 2,251 people to be transported to two transit centers by boat on Thursday, while a second group of 2,095 could follow later by road.

Once processed by the authorities, they would be sent to another center where they would be housed, fed, and asked to build homes through cash-for-work schemes.

Returnees would only be allowed to travel within Maungdaw township, one of the three they fled, and only if they accepted National Verification Cards, an identity document most Rohingya reject because they say it brands them as foreigners.

Many Rohingya, the majority of whom have been left stateless after decades of persecution, oppose going back without guarantees of citizenship and freedom of movement.