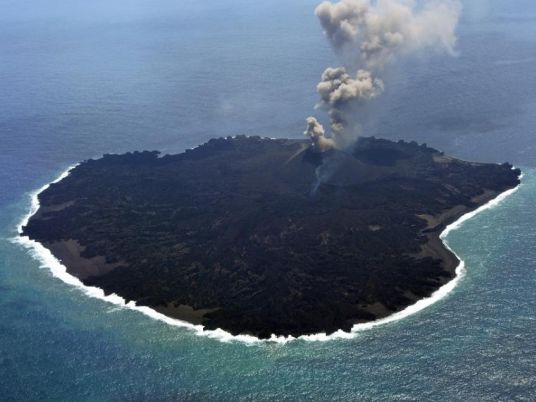 A brand new island emerging off the coast of Japan offers scientists a rare opportunity to study how life begins to colonise barren land — helped by rotting bird poo and hatchling vomit.
Researchers say bird waste will be the secret ingredient to kickstart Mother Nature's grand experiment on what is a still active volcano that only poked its head above the waves in November 2013.
That speck of land, some 1,000 km (620 miles) south of Tokyo, has grown to engulf its once larger neighbor, Nishinoshima, a part of Japan's Ogasawara island chain known for the wealth and variety of its ecosystem.
The new Nishinoshima, a respectable 2.46 square kilometers (0.95 square miles), the Japan Coast Guard said in February — roughly the size of 345 football fields — is currently almost all bare rock, formed from cooling lava.
But scientists say it will one day be humming with plant — and possibly animal — life, as nature moves in to what is being called a "natural laboratory" on one of the latest bits of real estate in the Pacific Ocean.
"We biologists are very much focusing on the new island because we'll be able to observe the starting point of evolutionary processes," said Naoki Kachi, professor and leader of Tokyo Metropolitan University's Ogasawara Research Committee.
After the volcanic activity calms down, "what will probably happen first will be the arrival of plants brought by ocean currents and attached to birds' feet," he said.
Those seabirds, who could use the remote rock as a temporary resting place, could eventually set up home there.
Their excreta — along with their dropped feathers, regurgitated bits of food and rotting corpses — will eventually form a nutrient-rich soil that offers fertile ground for seeds carried by the wind, or brought in the digestive systems of overflying birds.
"I am most interested in the effects of birds on the plants' ecosystem — how their bodily wastes-turned-organic fertilizers enrich the vegetation and how their activities disturb it," Kachi told AFP.
The old Nishinoshima, measuring just 0.22 square kilometers, was home to bird colonies until the eruptions scared the creatures away.
A small number have clung on to the only patch of the old island that is still visible, making their nests among ash-covered plants.
Pristine
Japan, which sits at the junction of several tectonic plates, is home to more than 100 active volcanoes.
Scientists have no idea when Nishinoshima will stop spewing lava, but its expansion is being offset by erosion around the edges.
The island is expected to follow a route laid out by Surtsey, an island that emerged from the sea in 1963, around 30 kilometers from the coast of Iceland.
The UN Educational, Scientific and Cultural Organization (UNESCO) World Heritage spot is known globally as an outstanding example of a pristine natural laboratory where researchers have been able to trace the evolution of a habitat.
"Since they began studying the island in 1964, scientists have observed the arrival of seeds carried by ocean currents, the appearance of moulds, bacteria and fungi, followed in 1965 by the first vascular plant," UNESCO says on its website.
"By 2004, (vascular plants) numbered 60, together with 75 bryophytes, 71 lichens and 24 fungi. Eighty-nine species of birds have been recorded on Surtsey, 57 of which breed elsewhere in Iceland. The 141 hectare island is also home to 335 species of invertebrates."
Not bad for somewhere that has only existed for half a century.
Nishinoshima might not be quite as quick as Surtsey to establish itself as a teeming wildlife haven — it is a long way from mainland Japan and not too close to its neighbors in the Ogasawara island chain, which limits the number of species of birds and seeds that will make it that far.
Nonetheless, it is an exciting blank canvas, said Kachi, and needs to be treated with respect — which means keeping out foreign invaders that would not naturally drift or fly in.
"I'd like to call on anyone who lands on the island to pay special attention to keeping it the way it is — not to take external species there," he warned.
He said when he conducted a field study on another island in the chain in 2007, his team prepared a fumigated clean room where they packed all research equipment, after making sure everything they had was either brand new or scrupulously clean.
While Nishinoshima is currently only being monitored from the air, the first field researchers will need to take similar precautions.
"Biologists know the business, but probably the first batch of scientists who will land on the island will be geologists and vulcanologists — who may not be familiar with the problems," he said.
"I'd be pleased to offer advice on this to scientists in other fields."