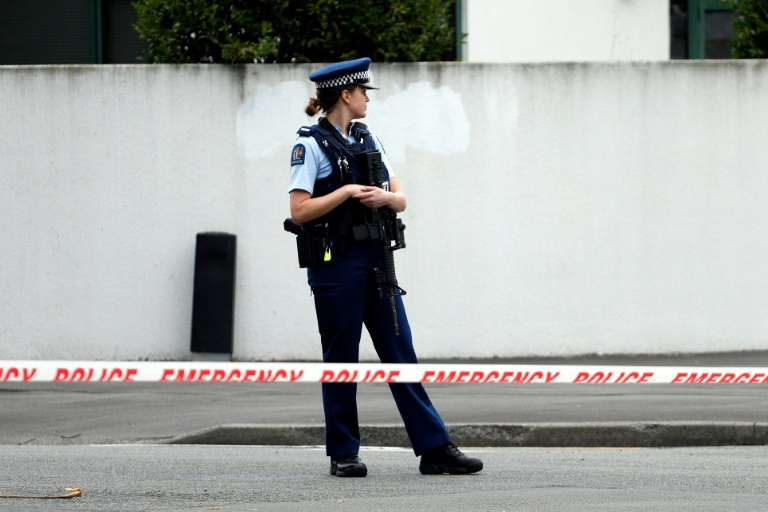 The nation’s firearms laws are lax compared to neighboring Australia, which enacted a strict gun control regime in the wake of a similar massacre in 1996.

Jacinda Ardern said 28-year-old Australian Brenton Tarrant obtained a “Category A” gun license in November 2017 which allowed him to purchase the weapons used to mow down worshipers in two Christchurch mosques.

Some of the guns appear to have been modified to make them more deadly, she said, adding that a ban on semi-automatic weapons would be considered.

“The mere fact… that this individual had acquired a gun license and acquired weapons of that range, then obviously I think people will be seeking change, and I’m committing to that,” she told a press conference.

“I can tell you one thing right now — our gun laws will change.”

Ardern confirmed that the suspected gunman and two associates who were also arrested had not been on the radar of any intelligence agencies for extremism.

“I have asked our agencies this morning to work swiftly on assessing whether there was any activity on social media or otherwise, that should have triggered a response. That work is already underway,” she said.

The head of the New Zealand Police Association, Chris Cahill, welcomed Ardern’s comments and said previous attempts to introduce gun controls had failed partly because of diehard opponents to reform.

“I believe many New Zealanders will be aghast that in our country someone can amass a cache of weapons like that discovered in this Christchurch tragedy,” he said in a statement.

“There is no place in the upcoming debate for the radical gun lobby which has made its presence felt in previous attempts to make our country safer.”

He highlighted the “bitter irony” that the alleged Australian shooter would not have been able to buy the same weapons in his home country.

At least one of the weapons used by Tarrant was reportedly an AR-15 — the same semi-automatic rifle used in a number of mass shootings in the United States, including the 2012 Sandy Hook school killings in Connecticut.

Families of the Sandy Hook victims were recently given the green light to sue US gunmaker Remington for knowingly marketing a military grade weapon that is “grossly unsuited” for civilian use and has become the gun of choice for mass killings.

But despite the horror of the Christchurch shootings, some local residents who AFP spoke with Saturday warned against any drastic moves on gun control.

“Let’s hope there are no knee-jerk reactions,” said Matthew Simmonds. “Just because a lot of people are killed on the roads we don’t ban cars. There needs to be a proper investigation.”

New Zealand tightened its gun laws to restrict access to semi-automatic rifles in 1992, two years after a mentally ill man shot dead 13 people in the southern town of Aramoana.

But subsequent efforts to tighten the laws, including a ban on semi-automatic weapons, have stalled in parliament.

Anyone over 16 can apply for a New Zealand firearms license, valid for 10 years after completing a safety course and a police background check.

Most guns do not require registration under New Zealand’s Arms Act and police do not know “how many legally or illegally owned firearms there are in New Zealand”, police said last year.

In 2014, police estimated there were up to 1.2 million legal firearms in civilian ownership, or around one for every four members of the public — twice the per capita number of guns in Australia.

Separate “endorsements” are required to own semi-automatic weapons, as well as pistols and other restricted weapons but police and firearms experts have pointed to several loopholes.

Embassy asks Egyptian community to be 'cautious' in New Zealand