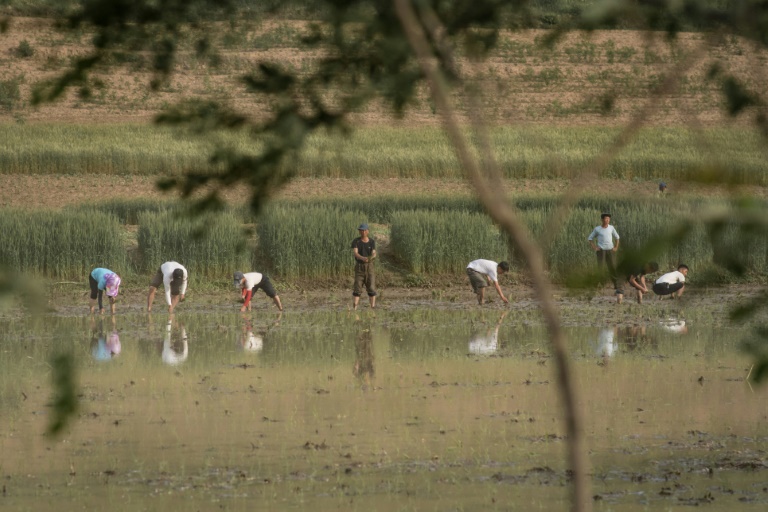 North Korea recorded its worst harvest for more than a decade last year, the United Nations said Wednesday, as natural disasters combined with its lack of arable land and inefficient agriculture to hit production.

The isolated North, which is under several sets of sanctions over its nuclear weapon and ballistic missile programmes, has long struggled to feed itself and suffers chronic food shortages.

But last year’s harvest was just 4.95 million tonnes, the United Nations said in its Needs and Priorities assessment for 2019, down by 500,000 tonnes.

It was “the lowest production in more than a decade”, the UN’s Resident Coordinator in the North Tapan Mishra said in a statement.

“This has resulted in a significant food gap.”

As a result 10.9 million people in the North needed humanitarian assistance — 600,000 more than last year — with a potential for increased malnutrition and illness.

It is equivalent to 43 percent of the population.

But while the number of people needing help rose, the UN has had to cut its target for people to help — from 6.0 million to 3.8 million — as it seeks to prioritise those most in need.

Funding has fallen far short of what the UN says it needs.

Only 24 percent of last year’s appeal was met, with Mishra describing it as “one of the lowest funded humanitarian plans in the world”.

Several agencies had been forced to scale back their programmes and some faced closing projects, he said, appealing to donors to “not let political considerations get in the way of addressing humanitarian need”.

“The human cost of our inability to respond is unmeasurable,” he said, adding that sanctions had created unintended delays and challenges to humanitarian programmes, even though they are exempt under UN Security Council resolutions.

The impoverished North has been frequently condemned by the international community for decades of prioritizing the military and its nuclear weapons programme over adequately providing for its people — an imbalance some critics say the UN’s aid programme encourages.

Ahead of his Hanoi summit with leader Kim Jong Un last week, US President Donald Trump repeatedly dangled the prospect of the North becoming an economic powerhouse if it gave up its arsenal, but the two were unable to reach a deal.

The Center for Strategic and International Studies said — based on its analysis of satellite imagery — activity is “evident” at a North Korean long-range rocket test site, suggesting Pyongyang may be pursuing its “rapid rebuilding” after the failed summit.

The country industrialized rapidly following the end of the Korean War and for a time was wealthier than the South. Funding from Moscow papered over the effects of chronic economic mismanagement, but that came to an end with the collapse of the Soviet Union, which was followed by a crippling famine.

That episode — known as the Arduous March, when hundreds of thousands of people died — is in the past but North Korea does not have access to the latest agricultural technology or fertilizers and its yields are well below global averages.

It is also a rugged, largely mountainous, country with only around 20 percent of its land area suitable for cultivation.

It was hit by a heatwave in July and August last year, followed by heavy rains and flash floods from Typhoon Soulik. As a result, the UN said, rice and wheat crops were down 12 to 14 percent.

The figure is significantly larger than in the South, where rice production was down only 2.6 percent last year, according to Seoul’s statistics, even though it experiences similar weather and climate.

The North’s soybean output slumped 39 percent and production of potatoes — promoted by leader Kim as a way to increase supplies — was 34 percent down, the UN said.

Last month Pyongyang told the UN that it was facing a shortfall of 1.4 million tonnes of food this year.

Mishra insisted that humanitarian agencies were able to monitor their programmes “rigorously” to make sure that help reached the most vulnerable people, adding: “We simply cannot leave them behind.”

Do you want fries with your North Korea-US summit?