Nubians are having mixed reactions to a cabinet decision to grant them land contracts in Toshka, with some heralding it as a victory of the revolution and others rejecting the offer.

Nubians were displaced from their homes in Upper Egypt between 1902 and 1934 when Egypt cleared land to build the Aswan Dam.

Author Haggag Adoal said Nubians had not asked for land in Toshka, and the decision does not take into account their demands, which include being allowed to settle on the banks of Lake Nasser.
Nubian activist Manal al-Teeby described the decision as unreasonable and said it was worse than the former regime's decisions regarding Nubians. She criticized Prime Minister Essam Sharaf for not meeting with Nubians before issuing the resolution and said there should be a public debate to resolve the issue.
Public Nubian Club President Moss'ad Herky praised the decision, which he said is one of the results of the revolution.
Despite the 100-year delay, the attempt to resolve land issues is a step in the right direction, he said.
Nubians should not return to Nasr al-Nuba because the lands and houses constructed for them there in the 1960s are unusable and are a waste of public money, he said, attributing his statement to the findings of a 1968 report.
Herky also called for the reestablishment of their electoral district, which former President Hosni Mubarak's regime eliminated.
The cabinet decision aims at driving a wedge between Nubians displaced in 1933 and the Nubians displaced in 1964, said Mounir Bashir, chairman of the Egyptian Nubian Association for Law, emphasizing that they want to return to Lake Nasser.
Omar al-Sharif, head of the council of the Aswan Local Center, heralded the decision as a victory, stressing that the center had pressured the government for the past 12 years to reach such a resolution.
Tags
displaced Nubians Nasr el-Nuba Young Nubians revive dream of returning to land in Egypt 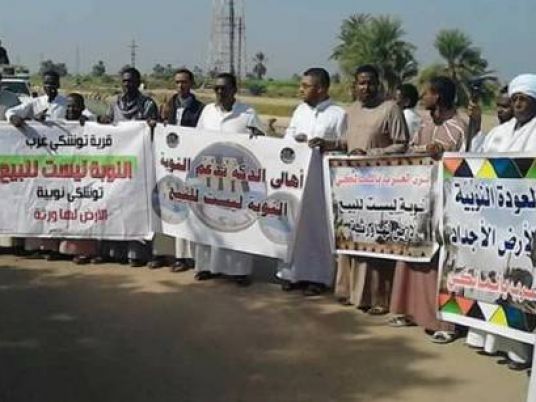