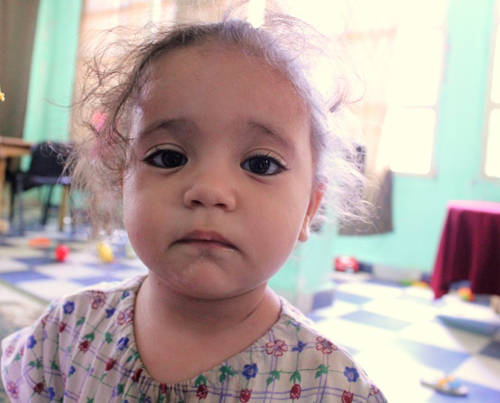 Shaimaa, 22, has Parkinson’s disease. She has been living on the streets of Cairo for most of her life. In her lap, a tiny baby lies sleeping.

Dinar is Shaimaa’s fourth child and marks her fourth return to the Rehabilitation Center for Young Street Mothers in Moqattam. The center is run and managed by the Hope Village Society, a nonprofit organization that has been sheltering and caring for homeless children for the past 35 years. While Hope Village has worked to protect and educate generations of homeless children, a lack of funds in a struggling economy has put increasing strains on the organization.

Shaimaa smiles shyly through the deep scars on her face, as her body shakes constantly. She is a source of concern for the staff at the Moqattam shelter; every time she returns to the shelter, she is pregnant again.

After she gives birth, she leaves with her baby and returns months later, pregnant again, without the child. The staff at Hope Village suspect that she may have sold or killed her last baby. The first baby died and the second was given to her sister to care for.

Shaimaa sits in a circle with six other young women, as the therapist, Shaimaa Abdel Kader, encourages them to talk about their day-to-day problems. Before entering the room, the organization’s project officer, Amira al-Feky, warns: “Do not ask about their past, compliment them on their babies and talk about their plans for the future. These girls have been raped and abused, have gone back to the street only to be raped again. They don’t want to talk about it.”

Eighteen-year-old Aya’s eyes shine brilliantly, and she flashes a beautiful, wide grin as she talks about the beaded jewelry she makes. She has found something she’s good at — something she loves — and she doesn’t want to go back to the streets again.

She glances over her shoulder at her 8-month-old baby sleeping in a crib and says she is done having kids. She is one of the shelter’s success stories, after getting married and moving out. But, she is temporarily back to stay until her new husband finishes his jail time.

Feky estimates that 20 percent of the cases they receive at Hope Village Society end up being success stories. Many leave the shelters with vocational training, job opportunities and a newfound independence. But, the reality is that many of the girls and boys return to the streets, as these often very young children have difficulty adapting to the organized system and strict environment of the shelters.

“They’re used to the chaos and freedom of the street,” says Abdel Kader. “But our doors always remain open to them, to give them a chance to repent and return. Giving street kids a second, third and fourth chance to redeem themselves is the best therapy.”

Feky notes that the organization had worked for decades with homeless boys, but girls began to appear on the streets in 2000. It took the government until 2003 to officially recognize the problem of street children, estimating their number at a paltry 13,000. Feky says Hope Village has personally dealt with more than 50,000 street kids across the country. The organization has reception centers, temporary and permanent shelters in Sayeda Zeinab, Rod al-Farag, and Hagana as well as in Alexandria and 10th of Ramadan City. It also has four mobile units that the staff uses to approach homeless children and to raise awareness about the shelters.

The organization now has shelters for homeless girls only, after staff members discovered girls disguised as boys had snuck into the shelter. The girls had shaved their heads, wrapped their chests to hide their breasts and dressed like boys. One girl avoided bathing herself for weeks on end so that the stench of her body odor would repel men on the streets from raping her.

“A girl who hides her gender has a better chance of survival on the street in Egypt,” Feky says. “Any girl who goes to live on the street will get raped. It’s unavoidable.”

The Moqattam shelter has regularly received pregnant and homeless girls, the youngest of whom was just 11 years old and had been forced to beg on the streets by her father.

“The number one cause of children escaping their homes and living on the street is divorce, when the parent may have a new partner who abuses the kids or kicks them out of the house,” Feky explains. The girls who seek shelter at Hope Village Egypt have either become pregnant or been raped, either on the street or by relatives.

The organization’s main aim is to eventually reconcile homeless children with their families, if the problem is not based on abuse or sexual assault.

“It’s good for the child to be with us, but it’s better to be with their mom,” Feky explains.

However, the toughest cases are young girls who have been sexually molested or gotten pregnant by relatives. Aside from their deep psychological trauma, the girls are shunned by their community if they become pregnant, and must deal with the difficulty of obtaining a birth certificate for their child without a husband.

In some cases, Hope Village will persuade the man who impregnated the girl to marry and divorce her, so that she can list his name on her child’s birth certificate and return to her community as a divorced woman. If the girl has been molested or made pregnant by a relative, the organization will take whatever legal action it can against the relative.

There are seven young women and 15 children staying at the Moqattam shelter. Many of them will stay on for years until they have secured work and accommodation. Many will return to the streets and repeat the vicious cycle of sexual abuse, violence, disease and poverty.

Many suffer from addiction, depression, anxiety and schizophrenia. All of them get the treatment they need here at the shelter, in addition to outpatient clinics at local hospitals and other forms of therapy when needed.

The sad reality is that shelters for homeless people in Egypt do not get the same attention and help that orphanages do. The Moqattam shelter’s director, Adel Gad, says the economic crisis is taking its toll on the organization. It has had to shut down its four mobile units, making it more difficult to approach, study and recruit street kids back to the shelters. The shelters are also worryingly short on funds to cover their medical expenses, baby formula and basic food commodities.

All the workers at the shelter are dignified, resilient and fully convinced of the good they are doing for the young and homeless, yet one worker says social stigma prevents Egyptian society from helping and donating to the shelter.

“Many perceive these homeless kids as dangerous — drug addicts, prostitutes and criminals,” he says. “People are wary of donating money to something that they think supports evil.”

One look at the beautiful, open, smiling faces of the children in the nursery is enough to see the good that Hope Village Society is doing in caring for young Egyptians from destitute backgrounds and traumatic pasts.

Hope Village Society is not one of the many charities oversaturating our Ramadan TV channels with heart-wrenching commercials. It is not part of any promotional campaign — nor, sadly, does it seem to have any major sponsors.