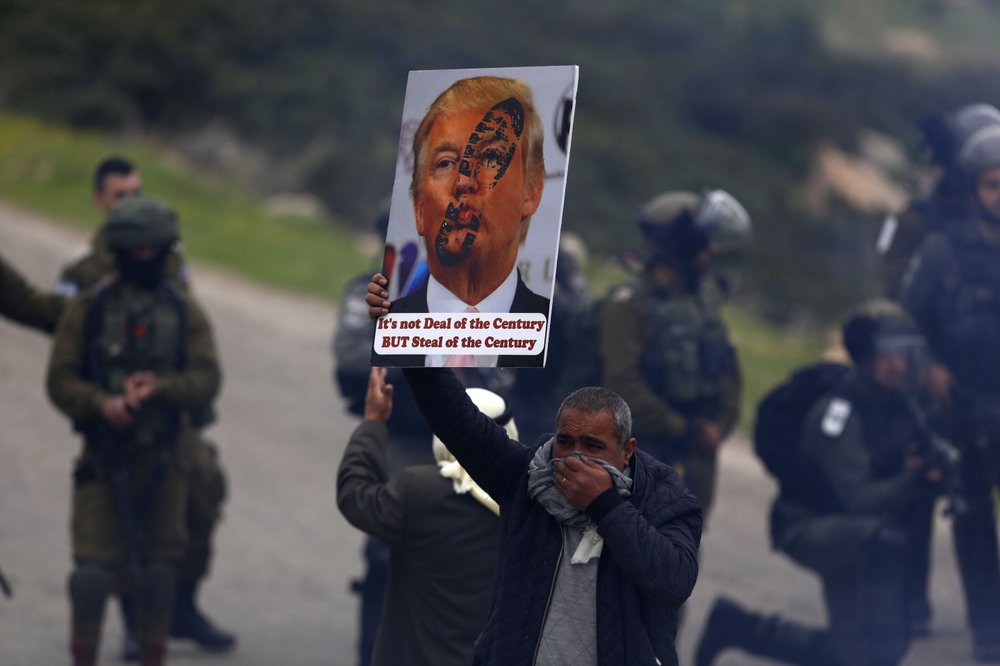 FASAYIL, West Bank (AP) — For generations, the people of Fasayil herded animals on the desert bluffs and palm-shaded lowlands of the Jordan Valley. Today, nearly every man in the Palestinian village works for Jewish settlers in the sprawling modern farms to the north and south.

The grazing lands to the west and east, leading down to the banks of the biblical Jordan River, have been swallowed up by the settlements or fenced off by the Israeli military. So instead of leading sheep out to pasture, the men rise before dawn to work in the settlements for around three US dollars an hour — or they move away.

“Everyone here works in the settlements, there’s nothing else,” said Iyad Taamra, a member of the village council who runs a small grocery store. “If you have some money you go somewhere else where there is a future.”

Palestinians fear communities across the Jordan Valley will meet a similar fate if Israel proceeds with its plans to annex the territory, which accounts for around a quarter of the occupied West Bank and was once seen as the breadbasket of a future Palestinian state.

Israeli Prime Minister Benjamin Netanyahu has vowed to annex the valley and all of Israel’s far-flung West Bank settlements, in line with President Donald Trump’s Middle East plan, which overwhelmingly favors Israel and has been rejected by the Palestinians. The process could begin as soon as July 1.

Netanyahu has said Israel will annex the land but not the people who rely on it, telling an Israeli newspaper they will remain in an “enclave” under limited self-rule, with Israel maintaining security control.

Few if any Palestinians would be given citizenship, leaving their legal status uncertain. In a region that heavily relies on agriculture, the loss of farm and grazing land could force many to relocate.

Shaul Arieli, a retired Israeli military commander who worked on border demarcation during the peace process in the 1990s, estimates that the Palestinians would lose up to 70,000 acres (280 square kilometers) of private land. He expects Israel will carve out a new 200-kilometer (124-mile) border between the Jordan Valley and the rest of the West Bank, and a 60-kilometer (37-mile) border around the Palestinian city of Jericho.

He based his conclusions on maps presented by Netanyahu and the White House, which show Israel extending sovereignty over large swaths of land while leaving most populated areas outside its borders.

Itay Epshtain, a special adviser to the Norwegian Refugee Council, said Palestinians would lose some of the limited protections they have, once Israeli courts are no longer formally obliged to consider international laws related to military occupation.

“Palestinians void of civil status in Israel, and not coming under the authority of the military commander, would neither have standing in the High Court nor the ability to challenge decisions of the government,” he said.

The Jordan Valley is home to around 60,000 Palestinians, according to the UN, but nearly 90 percent of the land is part of what is known as Area C, the three-fifths of the West Bank that is under complete Israeli control. In the Jordan Valley, it includes closed military areas and around 50 agricultural settlements housing some 12,000 Israelis.

Palestinians are barred from those areas, and even on the lands they own, they are forbidden from digging wells or building any kind of infrastructure without hard-to-get military permits. From 2009 until 2016, less than two percent of more than 3,300 permit applications in Area C were successful, according to Peace Now, an Israeli anti-settlement group, citing official statistics.

Anything built without a permit, from home extensions to tents, animal pens and irrigation networks, is at risk of demolition by the Israeli military.

“If you dig a well they will come the next day and fill it with concrete,” said Hani Saida, a farmer from the town of al-Auja. “They may annex this area, but they will never give us equal rights. They’ll keep trying to drive us away.”

COGAT, the Israeli military body that oversees civilian affairs in the West Bank, declined to comment.

Abdul-Malik al-Jaber, a Canadian-Palestinian businessman and the chairman of a large company that exports dates from the Jordan Valley, says the process of obtaining permits is a “nightmare,” even for big investors.

“There’s no way on earth a normal, simple farmer can afford the cost and the complications,” he said.

Al-Jaber said his company has spent the last two months and around $35,000 trying to secure a permit to build a modern date-packing plant on land he owns. He was told the Israeli military considers it a training area, even though farmers live there and work the land.

He fears annexation will only make things more difficult, by cutting off workers from the company’s fields and factories and further complicating the export process.

Israel’s annexation plans have sparked an international outcry, with European and Arab countries warning that it would violate international law and threaten any remaining hopes for a two-state solution.

But in the Jordan Valley and elsewhere in the West Bank the response has been more muted.

“From 1967 until today, water for drinking, water for agriculture, the border, the crossings, the roads, the government lands in Area C between the villages and the cities, the entrances to the towns — all of them are under Israeli control,” said Mohannad Saida, a cousin of Hani.

“Nothing is going to change,” he said.

He said his family owns around 750 acres (three square kilometers) north of al-Auja, stretching to the banks of the Jordan River. They fled during the 1967 war, when Israel seized the West Bank from Jordan and their land was sealed off as a military zone.

Over the years, they would drive into the hills to look down over the land. About 15 years ago, they noticed rows of freshly planted date trees, an extension of a nearby settlement.

A few years later, a relative who worked as a bulldozer driver was able to enter the area for an Israeli construction project. He took pictures of the mud-brick homes where their ancestors had been born and raised.

“We saw our mud houses,” Saida said. “They are still standing.”