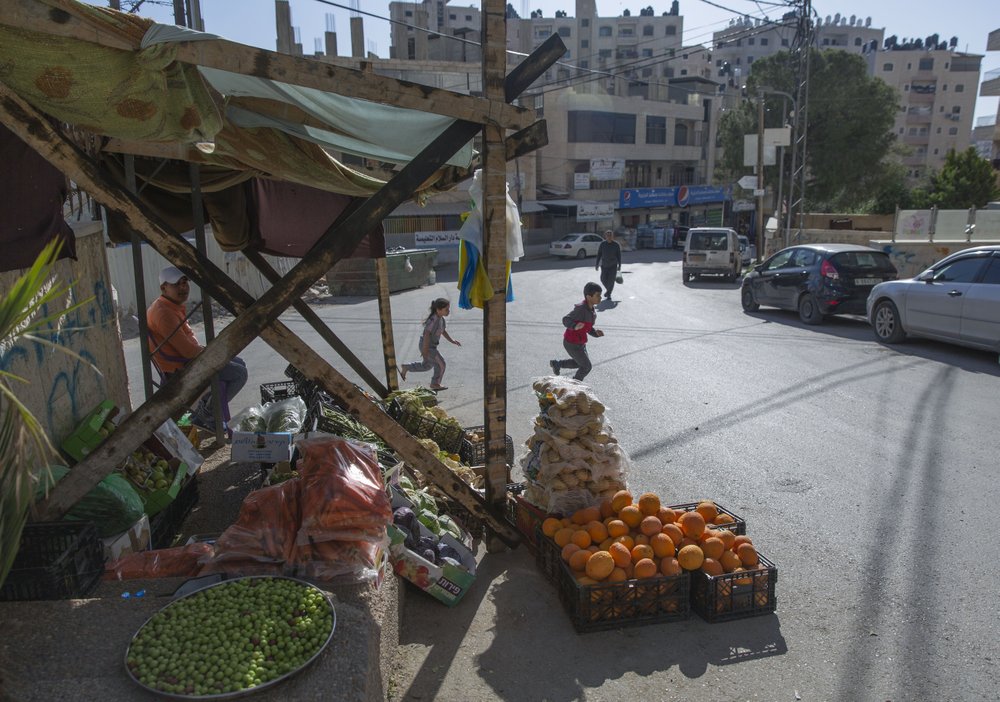 JERUSALEM (AP) — As the coronavirus pandemic gathered strength last month, community leaders in a Palestinian neighborhood on the outskirts of Jerusalem tried to impose lockdown and quarantine measures to protect residents.

The problem: there were no police to enforce the measures.

Kufr Aqab is within the Israeli-drawn municipal boundary of Jerusalem, which Israel views as its unified capital. It is therefore off-limits to the Palestinian Authority, which is headquartered in the nearby city of Ramallah and governs parts of the occupied West Bank.

But the neighborhood is on the opposite side of the separation barrier Israel built in the mid-2000s, so the Israeli police don’t go there either.

“This is no man’s land,” said Mayor Raed Hamdan.

When the neighborhood council set up checkpoints to restrict movement in or out, it had to rely on local volunteers. When it ordered businesses to close and people to stay home, they refused.

Now the town has at least 21 confirmed coronavirus cases, according to Sameh Abu Rumaila, the head of a local health committee that, like everything else, is run by volunteers. The committee estimates that another 500 people in the densely populated neighborhood have been in contact with those who were infected, but is powerless to isolate them.

“No one can control those people and put them into quarantine,” he said. Most have Jerusalem residency, allowing them to travel more or less freely in the West Bank, Jerusalem and Israel. Rumaila says the town is a “ticking bomb.”

The virus causes mild to moderate flu-like symptoms in most patients, who recover within a few weeks. But it is highly contagious and can cause severe illness or death, particularly in older individuals or those with underlying health problems.

But an estimated 120,000 people live in Kufr Aqab and other similarly ungoverned areas on the outskirts of the city. That could give rise to new outbreaks.

Nadav Matzner, the deputy spokesman for Magen David Adom, Israel’s emergency service, said it set up a testing center at a checkpoint near Kufr Aqab on April 23 and has carried out more than 160 tests. He said it normally does not operate beyond the barrier but has sent medics who are from those neighborhoods inside to conduct testing.

Officials from the Jerusalem municipality did not respond to multiple requests for comment.

Haneen, an 18-year-old resident, tested positive on April 19, along with her mother and four sisters. Her mother and one of her sisters have been hospitalized, while the others were quarantined in a hotel in Ramallah. She declined to give her last name out of privacy concerns.

Haneen and the sister who is hospitalized work inside Israel, but they were home during the two-week-long Passover holiday in early April, when much of Israel was shut down. They believe they were infected in Kufr Aqab.

“The town is open, all the shops are open, and we all go out and buy from the shops and contact other people,” she said. “There are no police to impose law and order, only local volunteers blocking the roads to Ramallah and Jerusalem.”

“They let you pass if you argue with them,” she said.

The volunteers have reason to be wary. In March, an argument at a checkpoint near Kufr Aqab led to an exchange of gunfire. Israel allowed Palestinian security forces to enter and restore order, but then they had to withdraw.

Israel captured east Jerusalem in the 1967 war and annexed it in a move not recognized internationally. It unilaterally expanded the city’s borders to take in large tracts of land — where it later built Jewish settlements — as well as areas like Kufr Aqab, which at the time were small Palestinian villages.

The Palestinians, who want east Jerusalem to be the capital of their future state, view the separation barrier as part of a larger plan to cut them off from the city and change its demographics.

Aviv Tatarsky, a researcher for Ir Amim, an Israeli rights group focused on Jerusalem, said Israel appears to be planning to redraw the city’s boundaries to exclude Kufr Aqab and other peripheral communities. That would reduce Jerusalem’s Palestinian population by more than a third, from around 330,000 to just 200,000.

President Donald Trump’s Middle East plan, which Israel has eagerly embraced and the Palestinians have rejected, would also remove those neighborhoods from Jerusalem.

“Israel built the separation barrier in a way that disconnects Kufr Aqab, with an explicit intention to get rid of Palestinians from Jerusalem,” he said.

Israel says the barrier was built in response to a wave of Palestinian suicide bombings and other attacks during the 2000-2005 uprising and that it’s essential for Israel’s security.

Kufr Aqab and other nearby neighborhoods have been plagued by a lack of law and order since the barrier went up. Criminal gangs enjoy free reign, and the lax enforcement of building codes has led to the rapid construction of apartment towers — some up to 18 stories high — that many fear are unsafe.

“We live in great anxiety here,” Naela Namour, a housewife and mother of two, said. People in the apartment towers pack into elevators, their children play together in small vacant lots and the local markets are as busy as ever.

“There are no rules,” she said. “People move, work, buy and sell without any restrictions.”

By MOHAMMED DARAGHMEH and JOSEPH KRAUSS

Image: In this Tuesday, April 28, 2020 photo, a Palestinian vendor displays his vegetables in the street as the main vegetable market remains closed, part of lockdown and quarantine measures to protect residents from the coronavirus, in the West Bank village of Kufr Aqab. (AP Photo/Nasser Nasser)