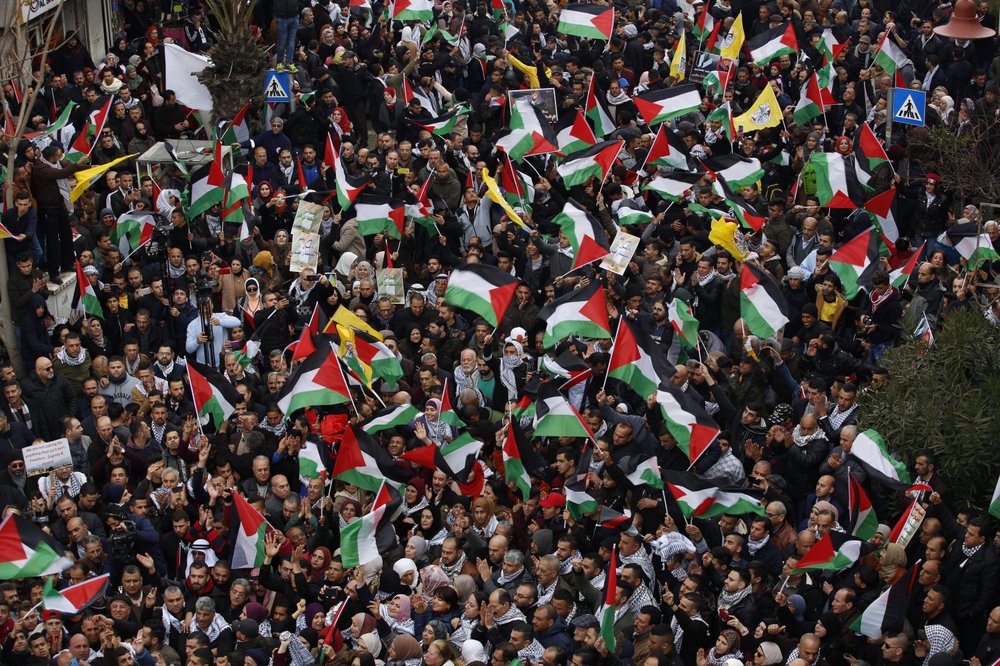 RAMALLAH, West Bank (AP) — Thousands of Palestinians rallied Tuesday in the West Bank to reject President Donald Trump’s Mideast initiative and to express support for the Palestinian leadership as it tries to gain support at the United Nations for a resolution opposing the plan.

Palestinian President Mahmoud Abbas plans to deliver a speech at the U.N. later in the day, but members will not be voting on a draft resolution. Palestinian officials denied the resolution had been pulled, but diplomats said many members, including European countries, rejected the language in a draft that had circulated.

Trump’s Mideast plan, announced at the White House on Jan. 28, sides with Israel on virtually all of the most contentious issues of the decades-old conflict. It would allow Israel to annex large parts of the occupied West Bank, including Jewish settlements that are home to hundreds of thousands of people and are considered illegal by most of the international community.

The Palestinians, who cut off ties with the U.S. after Trump recognized disputed Jerusalem as Israel’s capital in 2017, have adamantly rejected the plan.

An English-language banner read “Trump is part of the problem not the solution,” while another condemned the “theft of the century.” Arab officials and media refer to the plan sarcastically as the “deal of the century.”

“All Palestinian people and all the factions, national and Islamic, are standing behind President Mahmoud Abbas,” Prime Minister Mohammed Shtayyeh told the crowd.

“All the streets are full,” he said. “This is the Palestinian response.”

Abbas has tried to rally international support against the Trump plan, with limited success. The Arab League unanimously sided with the Palestinians against the plan, but key U.S. allies Egypt and Saudi Arabia said they appreciated Trump’s efforts and called for renewed negotiations. Israel and the Palestinians have not held peace talks in more than a decade.

The European Union issued a statement last week reiterating its support for a two-state solution based on the 1967 lines. The Palestinians want to establish a state in east Jerusalem, the West Bank and the Gaza Strip, territories Israel seized in a war with Arab countries a half-century ago.

The original draft resolution, co-sponsored by Tunisia and Indonesia and backed by the Palestinians, said the U.S. plan violates international law and Security Council demands for a two-state solution based on borders before the 1967 Mideast war. It would have expressed the council’s determination “to examine practical ways and means to secure the full implementation of its relevant resolutions, including enforcement measures under Chapter 7 of the (U.N.) Charter,” which can be by military or non-military means.

The resolution had been expected to be put to a vote on Tuesday. But diplomats said many of its provisions were not acceptable to European and other council members.

Any resolution is virtually guaranteed to be vetoed by the United States, but the Palestinians had hoped that a strong show of support from other members of the council would help shore up international backing for their demands.

Palestinian leader to address UN on Trump plan, but no vote