If you travel 120 km from Upper Egypt’s ancient city of Aswan, you will reach the ‘Egyptian Ladies Village’, commonly known as ‘El Samha’, a village owned entirely by women.

This isn’t part of some suggestion from an MP aiming to generate support from women in local elections, but it is the reality on the ground of a small village located on the West Bank of the Nile, between Esna and Aswan.

Covering an area of six acres, ‘El Samha’ village was established in 1998 by the Egyptian government for the sake of settling widowed women, women divorcees, or women unable to make a self-sufficient living.

“There are 303 women living in the village,” General Supervisor of Samha village Hamdy El Kashef told Egypt Independent on Tuesday. “They assigned these ladies to plant some agriculture lands and poultry farming [in order to] earn a living”

Kashef added that upon the establishment of the village, each woman was granted a house and agricultural land from the Ministry of Agriculture.

But, in what is perhaps a startling and peculiar contrast to mainstream Egyptian society, only non-married women, widows, and divorcees are allowed to live in the village: when a woman intends to get married, she must leave the village, as this is considered a “violation” to the village rules.

Commenting on the services provided by the state to accommodate the village’s residents, Kashef highlighted that the state recently established a healthcare unit that provides medical care for the women of the village. In addition to this, the government provides education for the residents, a ‘preliminary’ and ‘preparatory’ schooling.

Kashef explains the current status of the village’s women, describing how the agricultural operation of the land is considered a “tough” process for them, which led to some resorting to selling their land and using the money to live, while others remain earning a living from the agriculture.

He added that it is necessary to provide loans, as well as enable a diversification of professions for the women so that they can find alternatives to agriculture. Kashef explained that upon a recent visit to the village from an international organization, the women were provided with livestock and feed which sought to enable them to find an alternative profession to agriculture, which Kashef describes as requiring the physicality of men. 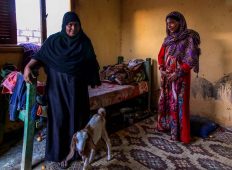 Kashef asserted that the village is in dire need of development, with the village houses only being one-floor. Their houses consist of two rooms, a kitchen, and an animal farm – with the farm receiving support from the ministry of agriculture. However, some houses are being taken from any women proved to be married – with marriage considered a violation.

On the daily life of the village’s women, Kashef told Egypt Independent that “the ladies of the village are living in a harmony – with the arrival of sunset, they gather to exchange tales and speak of the problems they are facing.” Moreover, he continued, “every district has a lady-leader who organizes the meetings between other women.”

Kashef concluded by asserting that the project aims to secure a future for the children of families who lost a ‘provider’, whether this person was dead, or unable to earn living.