Among the crowds in Cairo’s Ramses Square, 15-year-old Karim Mohamed was looking for his friend.

After several attempts, he couldn’t find him.

The boy seemed anxious, having lost the cordiality he once held with people he’d long been familiar with, his fellow street children or the other homeless in the square. 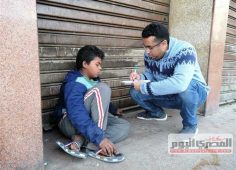 As the government takes on drastic measures to fight the novel coronavirus (COVID-19) the homeless and street children have been neglected.

They carry on just as they always have – sleeping under bridges, on sidewalks, near closed stores.

But now they’ve lost vital shelters, like the places of worship that spared them from the cold and even allowed them to use their washrooms, forcing them to turn to the streets and the people there.

At Ramses Square, Karim sat in front of a closed coffee shop, meditating on the passers-by and flocks of people leaving the train station. Nowhere in the crowds were the friends who accompanied him two weeks ago in search of food or shelter.

“I see them at night when the curfew begins. We all feel afraid and meet each other at the garden in the middle of the square,” Karim added.

Karim left his family home three years ago. He still knows the address of his mother, and sometimes goes to see her in the al-Deweika area – and then he’s back on the street.

“Nobody checks on me, nobody pays for my needs. I have a younger brother, and he as well stays on the streets,” he said.

Like everyone else, Karim has heard about the coronavirus and the instructions for maintaining personal hygiene.

“People tell me: go bath”, and he replies, “The mosque is now closed, and I have no home.”

Karim says he can’t go home anyway, as people there would fear him being a carrier of the virus.

“If only someone could take me with him and take care of me,” he lamented.

Before the outbreak, Karim used to go to the al-Fateh Mosque nearby the square for breakfast, lunch and dinner.

Now that the places of worship are closed, he’s lost his three meals.

“People in the mosque told me: gatherings are banned, and the buffet is closed.”

From the money he gets by begging, Karim sometimes buys tissue paper to sell or beg with.

“Sometimes people give me money and turn down the tissues I offer, and sometimes they beat me and run away because they are afraid.”

And before restaurants began partially closing, Karim frequented them to beg the sympathy of store workers.

“People used to give me what I want,” he said, but now “None of the store owners even want to see us.”

Setting out to the streets, Karim looks for his peers yet again. He eventually finds them in the middle of the square garden, exhausted after searching for food.

“I heard if we caught the cold, we could die,” one of them said. “There are some ill kids with us.”

“A battery for my little mobile, so I can call my friends if something happens to me.” 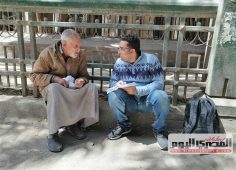 With a slim body and shabby clothing, 80-year-old Gharib Mohamad sat on a platform in al-Galaa Street. Just a month ago he’d been employed at a paints shop until its owner died.

The heirs decided to dismiss him, saying he was no longer fit to work and had become “redundant labor.”

Gharib is married and takes care of his wife, something he felt no longer capable of after losing his job.

And so, he left his house.

“Where could I get money for me and her?” he said. He continued insisting on his decision even after being taken to the Abbasiya Chest Hospital where doctors told him to stay home because of his weak immune system, putting him at risk of the coronavirus.

Gharib ignored them, setting out on the streets in hopes of finding another job.

“People told me: you are not fit for work, we are in recession,” he said.

But the old man didn’t care, saying that “Death from hunger is stronger than the virus. God didn’t grant me children to take care of me.”

Faris with no shelter 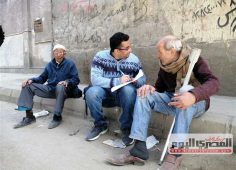 On a sidewalk opposite to development work of the Maspero Triangle, 77-year-old Faris Fahmy sat in the dirt, mourning his old good days.

The senior was alone after the death of his wife 20 years ago, and how lives on the streets.

“God did not bless me with children and now I’ve no connection with my family,” he lamented.

Fahmy used to work as a ceramic tiler. He recalls the injury that changed everything and stopped him from working ever again: “I was helping the workers, and I got up on a scaffold and fell down. My feet were disabled.”

“My wife could not bear the sight of me with the disability, and she died.”

Fahmy is now a “Sais” (unauthorized individuals in Egypt who collect fees from residents for parking their cars on public streets). With the advent of the coronavirus, the streets have emptied and work has dried out.

“People are now afraid to go out or leave their cars,” he said, adding that some people even fear he could infect them.

The man hopes that an old people’s home helps him: “If an elderly home takes me with them, I will agree. At least then I die with my dignity.”

And as the police comb the streets to enforce the curfew Faris says he’s left all alone, with no one to turn to. 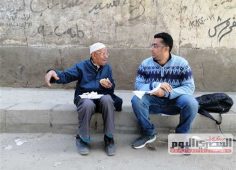 “Fear of the spread of the coronavirus has turned into intimidation against us,” Ahmed Ali, 76, said.

“People are pointing at us and are afraid of us… Nobody is sympathetic with us like before (the virus).”

As people take their precautions and wash their hands in hopes of warding off the virus, Ahmed said he can’t even clean himself and his clothes, and has to eat with unwashed hands.

“I want work to provide food and drink for myself. What can I do? I sleep in the street. I want someone to take care of me. I need a home to go to and rush back to before curfew like most people,” Ali said.