An Egyptian archaeological mission has uncovered a small royal statue of a Sphinx during archaeological survey work in Tuna al-Gabal cemetery in the city of Mallawi, Minya.

A statement by the Egyptian Antiquities Ministry said that the statue is made of limestone with a height of 35 cm and a length of 55 cm. It has clear and beautiful features and details, reflecting the skill of the ancient Egyptian sculptor. 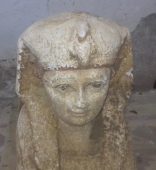 The mission also found sets of amulets made of blue faience pottery for the goddess Bes, ostracon from pottery, clay pots of various shapes and sizes, and an alabaster bottle.

The survey and archaeological excavations will continue to find out the reason for the presence of this statue in this mysterious area.

During the past three years, several archaeological discoveries have been made, such as a large group of cemeteries and burial sites that included many stone and wooden coffins in which mummies were found in good condition.

Heatwave across Egypt for the next 72 hours: EMA

Tripartite industrial strategy between Egypt, UAE and Jordan in the works: Egyptian PM