The 400-meter length container ship is able to carry 21,203 full containers, he added, as it registers a new record in its current voyage from Singapore to Europe. 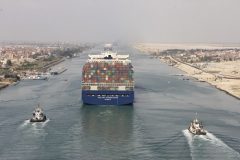 Rabie ordered all measures be ship to pass safely by providing all necessary navigation assistance.

The website of the CMA CGM describes the ship as “the world’s first LNG-powered container-ship with a full capacity of 23,000 containers (twenty-foot equivalent units), has set a world record for the number of full containers loaded on a single vessel.”

“On her departure from Singapore earlier this month, the CMA CGM Group’s new flagship was carrying a record 20,723 full containers.” 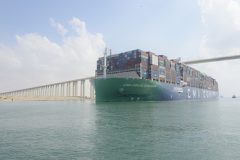 “Featuring a host of innovations, the CMA CGM JACQUES SAADE clearly demonstrates the CMA CGM Group’s commitment to energy transition in the shipping industry. LNG is currently the industry’s best available technology for preserving air quality, and also provides an initial response to the challenge of tackling climate change,” it added.

“After joining the Group’s fleet on 22nd September, the CMA CGM JACQUES SAADE is now on her maiden voyage on the CMA CGM Group’s iconic French Asia Line (FAL 1), connecting Asia with Europe. This line provides a weekly service comprising 13 calls over the course of 84 days.” 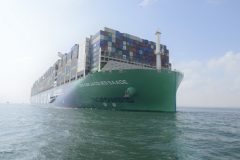 “The CMA CGM JACQUES SAADE, already assured of her place in history because of her innovative technology, is now a record-breaker and symbolizes the CMA CGM Group’s operational, commercial and environmental excellence,” the site concluded.