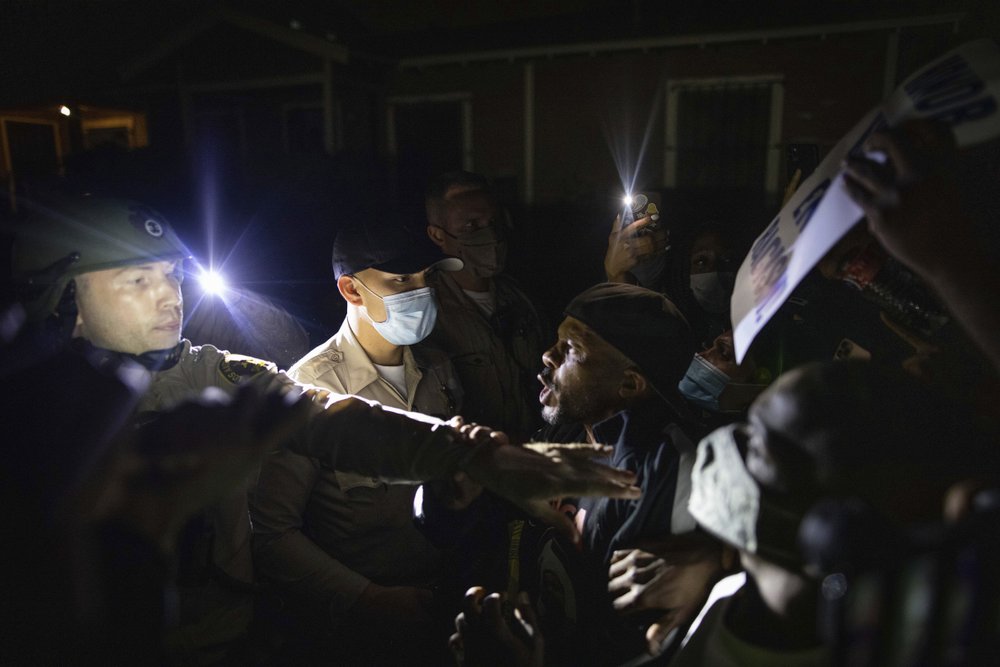 LOS ANGELES (AP) — A Black man was shot and killed by Los Angeles County sheriff’s deputies after he was stopped for a traffic violation while riding a bike, then ran from police, punched one officer and then “made a motion” toward a gun on the ground, authorities said.

The killing came on the heels of the police shooting in Kenosha, Wisconsin, that left Jacob Blake, who is also Black, paralyzed and spurred days of protests, reinvigorating the national debate on racial injustice and policing.

Also Tuesday, the Los Angeles County Board of Supervisors voted to ask the coroner to conduct an inquest into the fatal deputy shooting of 18-year-old Andres Guardado on June 18. Guardado was shot five times in the back after deputies said they saw him with a gun and he ran. Guardado’s family filed a wrongful death lawsuit on Monday against the county, the Sheriff’s Department and deputies involved in the shooting.

Kizzee’s family and friends created a small memorial for him at the shooting scene in the Westmont neighborhood — leaving flowers, balloons and candles just feet away from first responders’ discarded blue medical gloves and rolled bandages.

The Sheriff’s Department has not released Kizzee’s name, but two relatives confirmed his identity. In interviews with The Associated Press, they remembered the 29-year-old Kizzee as an energetic man with many friends and expressed anger at the shooting.

“You guys take care of dogs. You don’t take care of us,” said Kizzee’s aunt, Fletcher Fair, addressing the Sheriff’s Department. “He was a sweet and loving young man. He had his whole life ahead of him, and it was cut short by rogue sheriffs.”

Kizzee’s uncle, Anthony Johnson, 33, said they grew up together and were as close as brothers. Johnson said he often warned his nephew that, as a Black man, he had to be especially careful.

“ ‘You have a target on your back, just by being you,’ ” Johnson remembered telling Kizzee as recently as a few weeks ago. “He was like, ‘Yeah, all right, uncle,’ like he always says.”

A Sheriff’s Department statement released Tuesday evening said deputies had tried to stop Kizzee for riding his bicycle in violation of vehicle codes, but he dropped his bike and ran. It didn’t provide any more details about the alleged violation.

The deputies momentarily lost sight of him. But when they caught up, he immediately punched one deputy in the face and dropped a jacket, causing a black semiautomatic handgun to fall to the ground, according to the statement.

The shooting occurred when the man “made a motion” toward the gun, the statement said.

Kizzee offered her money to drive him away.

“I didn’t know who he was running from, so I told him no,” she said.

Irby said a short time later, she saw Kizzee scuffle with a deputy, who backed away and then shot him.

The same deputy and another fired at Kizzee after he fell to the ground, she said, adding: “He had nothing in his hands.”

Police said the handgun was recovered, and no deputies were injured. TV news helicopters showed a gun near the body.

Dean said investigators had not yet interviewed witnesses or reviewed any surveillance or cellphone video.

“Give us time to conduct our investigation,” he said. “We will get all of the facts of this case and eventually present them.”

The Los Angeles County Sheriff’s Department, the largest in the nation, does not have body cameras for deputies, though that soon will change. The county Board of Supervisors on Tuesday approved funding, and the first round of deputies will be equipped with cameras next month.

Ed Obayashi, a use-of-force consultant to law enforcement agencies and a deputy sheriff in Plumas County, said the Los Angeles County deputies will need to explain how they felt Kizzee presented an immediate threat even though his weapon was on the ground.

“For the officers to justify their shooting of Mr. Kizzee, they are going to have to articulate that they reasonably feared for their safety,” Obayashi said.

It will be important for the deputies to be specific, he said.

“What made you believe that he was an ongoing, immediate threat to the public?” Obayashi said. “Did you believe he was still armed? Why? And if he was armed and running away, what was your reason for feeling that he constituted a threat to yourselves or the public?”

Fair described her nephew as “a mother’s child,” saying Kizzee took care of his mother after a car crash until her death in 2011 from a heart attack. After that, he took care of his younger brother, Sean Jones, who is 18 and a recent high school graduate.

Fair lives near where Kizzee was killed and couldn’t believe the circumstances surrounding her nephew’s death.

“How do you get a violation on a bicycle?” she asked. “I stayed here until they picked his body up. I didn’t want to leave.”

This story has been updated to correct that the dead man’s reported surname is Kizzee, not Kizee.

Trump seizes on protests as Dems blame him for tensions