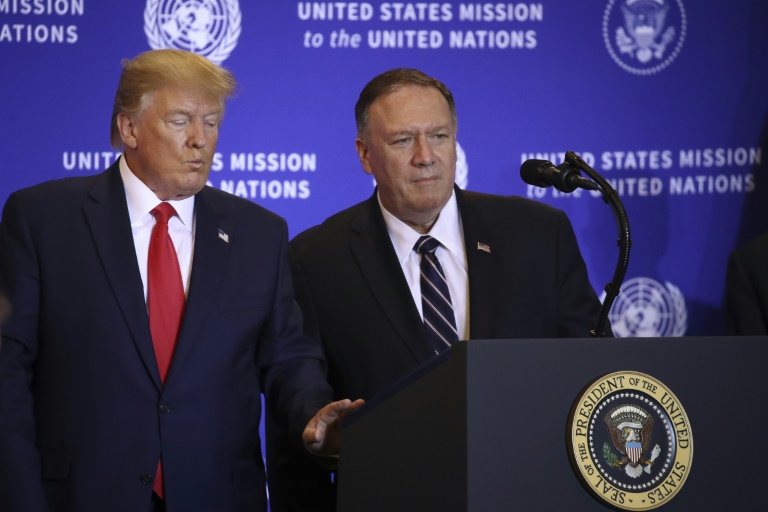 Democrats charged aggressively into an impeachment investigation of President Donald Trump on Friday, ordering Secretary of State Mike Pompeo to turn over Ukraine-related documents and scheduling testimony for witnesses to alleged abuse of power by the US leader.

Three House committees gave Pompeo one week to produce the documents, saying multiple State Department officials have direct knowledge of Trump’s efforts to enlist the Ukraine government’s help in his US campaign for reelection.

“The Committees are investigating the extent to which President Trump jeopardized national security by pressing Ukraine to interfere with our 2020 election and by withholding security assistance provided by Congress to help Ukraine counter Russian aggression,” they said.

Public support is growing for impeachment after the release of an anonymous whistleblower’s complaint on Thursday, reportedly made by a CIA analyst who had worked in the White House.

It accused Trump of pressuring Ukraine’s President Volodymyr Zelensky in a July 25 phone call to supply dirt on former vice president Joe Biden, the favorite to represent Democrats against Trump in the 2020 presidential election.

The complaint also revealed that White House aides, alarmed at Trump’s implicit offer to release aid in exchange for Zelensky’s help, sought to hide the record of the call in a highly secure computer system normally used only for the country’s most top-secret intelligence.

Congressional investigators on Friday announced interviews starting next week with five State Department officials, including former ambassador to Ukraine Marie Yovanovitch, whom Trump reportedly forced out earlier this year for resisting his efforts to pressure Kiev to probe Biden.

The list also includes US special representative on Ukraine Kurt Volker, who resigned Friday after being ordered to answer questions in the impeachment investigation, a source familiar with the matter told AFP.

House Speaker Nancy Pelosi declared that the impeachment investigation would move quickly, saying evidence from the whistleblower’s complaint against Trump of abuse of power and an attempted cover-up was unambiguous.

“The clarity of the president’s actions is compelling and gave us no choice but to move forward,” Pelosi said.

In a series of tweets Trump attacked Democrats — including Adam Schiff, the lawmaker named by Pelosi to lead the impeachment probe — calling them liars, while also taking aim at the “partisan” whistleblower and the “Fake News Media and their partner, the Democrat Party.”

In a video leaked from a private gathering Trump held Thursday with US diplomats in New York, Trump made clear he was battling for his survival.

“We’re at war. These people are sick,” Trump says in the video obtained by Bloomberg.

Schiff said Friday his committee will issue more subpoenas next week and conduct a closed-door briefing with the Inspector General of the Intelligence Community, the official who conducted a preliminary investigation into the whistleblower complaint and deemed it credible.

“We have to flesh out all of the facts for the American people. The seriousness of the matter and the danger to our country demands nothing less,” Schiff said.

Meanwhile, more concerning allegations against Trump came to light late Friday, with The Washington Post reporting Trump told Russia’s foreign minister and ambassador to the US he was unconcerned about Moscow’s interference in the 2016 US elections because Washington did the same in other countries.

The paper cited three former officials who requested anonymity to discuss details of the May 2017 Oval Office meeting, during which he famously revealed highly classified information on the Islamic State group.

The comments reportedly alarmed White House officials who restricted access to a memorandum describing the meeting to those with only the highest security access.

More than 300 high-level professionals from the national security community have signed a letter backing the impeachment investigation.

“President Trump appears to have leveraged the authority and resources of the highest office in the land to invite additional foreign interference into our democratic processes. That would constitute an unconscionable abuse of power,” they said.

Democrats said articles of impeachment — formal charges — against Trump could be completed in as soon as a month and then swiftly debated and voted on in the House, where the party has a majority solid enough to ensure passage.

The case would then be handed to the Senate to try Trump — who, for the moment, appears able to count on a Republican majority in the chamber to prevent his conviction and removal.

“As a former prosecutor, I should tell you that cases are made much easier when the defendant cops to the act, and here the president is not denying what he said,” Democrat Eric Swalwell, a member of the House Intelligence Committee, said on CNN.

As feud heats up, Trump says Biden was subject of Ukraine call