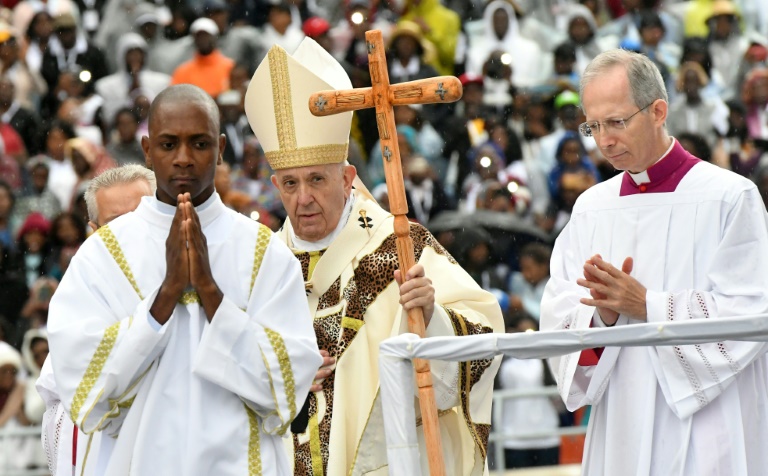 Pope Francis on Friday told tens of thousands of faithful at a packed stadium not to resort to “vengeance” as he wound up a visit to Mozambique, ravaged by a 16-year civil war and now the target of jihadi attacks.

His maiden visit to the poor former Portuguese colony came a month after the government and the former rebel group Renamo, now the main opposition party, signed a historic peace treaty.

Brutal jihadist attacks in northern Mozambique have claimed more than 300 lives over two years and forced thousands from their homes.

“We cannot think of the future and build a nation” with violence, the pope said in a homily to a crowd of about 60,000 at the Zimpeto stadium in the Mozambican capital Maputo.

Speaking in Portuguese, he asked them not to follow the old law of retaliation “an eye for eye, a tooth for a tooth.

“No family, no group of neighbors or ethnic group and even less no country has a future if the motor that unites them… is composed of vengeance and hatred,” he said.

Denouncing reprisals cloaked under the guise of legality, the pope warned that violence was “an endless spiral without end with a very high cost.

“You have the right to peace!” he said.

Mozambique is a mainly Christian country and 28 percent of the population is Catholic.

Earlier Friday, the pope visited an AIDS care center on the outskirts of Maputo, hailing the carers for responding to their “silent cry” for help in a country ravaged by the disease.

According to UNAIDS, 2.2 million Mozambicans — 60 percent of them women — were HIV positive in 2018 in the southern African nation of 27 million people.

Francis hailed the “compassion” of the health workers for responding to “this silent cry, almost inaudible, of innumerable women and all the people living in shame, marginalized and judged by everybody.

Francis thanked workers at the AIDS center for “restoring the dignity” of women and children suffering from HIV and AIDS and for “hearing their cries and intervening personally.”

He did not however touch on the delicate subject of prevention — an issue riddled with minefields given the Catholic Church’s stand on contraception — especially in a largely conservative and traditional continent.

Francis is the first pope to visit Mozambique since John Paul II in 1988 and is on a three-nation tour that includes Madagascar and Mauritius.

On Thursday, the pontiff visited a brand new hospital in Zimpeto, a poor outlying district of the capital, where 23 percent of adult residents have been hit by HIV.

This programme, named “Dream”, was launched in 2002 by the Italian lay Catholic association Sant’Egidio which is very close to the Vatican and is dedicated to social service.

It runs 13 health centers in the country. The “Dream” project is spread across 11 African countries.

The pontiff left Mozambique in the afternoon and arrived in Madagascar, where welcoming crowds lined the road linking the airport to the capital Antananarivo.

Madagascar has declared Friday a national holiday in honor of the visit.

“It’s a blessing for Madagascar. I hope it will bring peace and prosperity for me, my family and my country,” said Genevieve Sahondra, who had traveled from the country’s southeast to welcome the pope.

Mozambique and Madagascar are among the world’s poorest countries and Francis’ decision to visit is seen by commentators as an act of solidarity from a cleric who was a frequent presence in the shantytowns of Argentina and is now called the “pope of the poor”.

Image: AFP / Tiziana FABI ‘An eye for an eye’ no longer cuts it