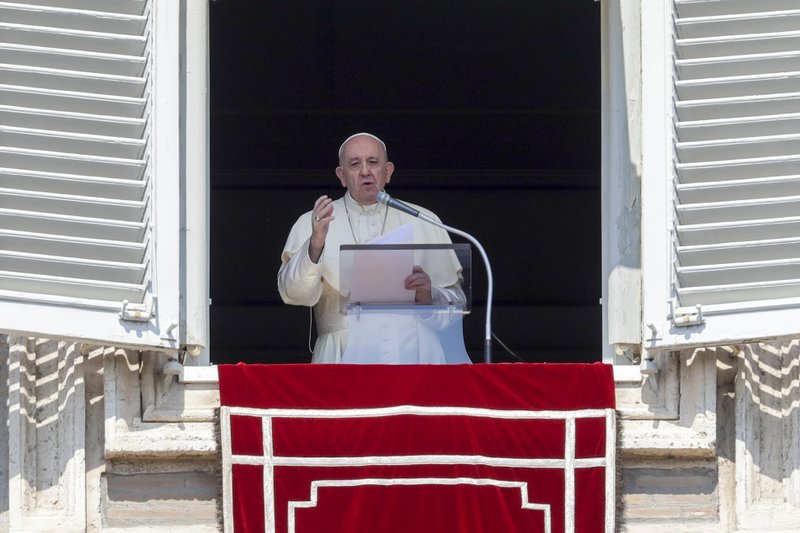 VATICAN CITY (AP) — Pope Francis expressed solidarity Sunday with the thousands of migrants who were left homeless by fires that wrecked a refugee camp on the Greek island of Lesbos and called for them to receive a “human and dignified” welcome wherever they relocate.

Francis recalled visiting the Moria camp during an emotional April 16, 2016 day trip to Lesbos that ended with Francis bringing 12 Syrian refugees back with him to Rome aboard the papal plane.

“I express solidarity and proximity to all the victims of these dramatic events,” Francis, who has frequently spoken out for the humane treatment of migrants, said during his noontime blessing in Vatican City.

Fires on Tuesday and Wednesday nights gutted Moria, Greece’s largest refugee camp. Authorities have said residents protesting a lockdown imposed after a coronavirus outbreak deliberately set the blazes. Greek authorities said Sunday some 12,000 migrants would be moved to an army-built tent city in the coming days.

Francis’ 2016 visit to Moria, though brief, was one of the most memorable foreign trips so far of his seven-year papacy.

He toured the camp with the spiritual leader of the world’s Orthodox Christians, Ecumenical Patriarch Bartholomew I, and the head of the Church of Greece. He met would-be asylum-seekers who wept at his feet.

The church leaders issued a joint statement urging the world to respond to the latest migration crisis with urgent, practical resources. Francis said Sunday that the memory of that visit were still alive as well as the appeal “for a human and dignified welcome to men and women migrants, to refugees and those who seek asylum in Europe.”

At the time, the Islamic State group was targeting Christian minorities in Iraq, Syrian refugees were fleeing the civil war and the European Union was implementing a plan to deport the refugees in Lesbos back to Turkey.

“The tragedy of forced migration and displacement affects millions, and is fundamentally a crisis of humanity, calling for a response of solidarity, compassion, generosity and an immediate practical commitment of resources,” the trio’s appeal said.

Francis later revealed that in its own concrete response, the Vatican had negotiated in the days leading up to the Lesbos trip for the papal plane to carry back with him three Syrian families. The pope said the 12 people were selected because their papers were in order and that they would receive help finding housing, work and schools in Rome..

Asked about the gesture during his in-flight press conference, Francis cited Mother Teresa, the nun who spent her life caring for the poor and destitute of India. At one point she said her work was but a “drop of water in the sea. But after this drop of water the sea will not be the same.”

“That is how I would respond,” Francis told reporters. “It is a small gesture. But one of those small gestures that we must make, everyone, men and women, to reach out to those in need.”

Image: Pope Francis delivers his blessing as he recites the Angelus noon prayer from the window of his studio overlooking St.Peter’s Square, at the Vatican, Sunday, Sept. 13, 2020. (AP Photo/Andrew Medichini)

Greece: Homeless migrants will be housed ‘in coming days’