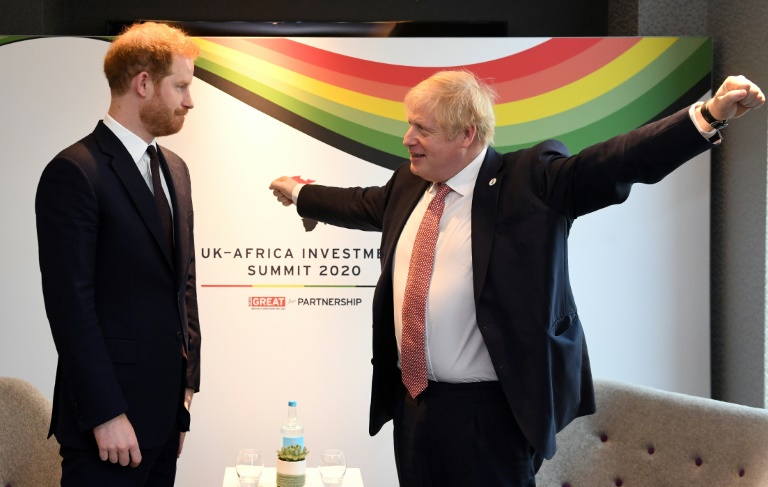 Britain’s Prince Harry has left the UK to rejoin his wife Meghan and son Archie in Canada, British media reported, as the couple start a new life after their shock exit from the royal fold.

The Duke and Duchess of Sussex are bowing out entirely from representing the British monarchy, in a crisis that has shaken the centuries-old institution.

The prince boarded an evening flight to Vancouver after attending a UK-Africa investment summit in London, in what is expected to be one of his final official engagements as a working royal, the Daily Telegraph reported.

The departure “will be deemed symbolic, coming just two days after Buckingham Palace announced that it was severing all official ties with the Sussexes as they walk away from public life,” the Telegraph said.

The prince and his US former actress wife have struggled with the scrutiny since their wedding in May 2018 and the 35-year-old said there was no alternative to stepping back from front-line royal duties to achieve “a more peaceful life” with their infant son.

Harry, who remains sixth in line to the throne, also had an informal 20-minute private meeting with British Prime Minister Boris Johnson on Monday.

The premier has said the whole country would want wish Harry and Meghan all the best for the future.

Harry later skipped a summit dinner for the visiting African leaders at Buckingham Palace in order not to overshadow his brother William’s hosting of the event, the Daily Mail reported.

The couple will no longer be referred to as his or her royal highness.

“Our hope was to continue serving the Queen, the Commonwealth and my military associations, but without public funding. Unfortunately that wasn’t possible.”

Harry also confessed to some trepidation at charting a new life in Canada.

“We are taking a leap of faith,” he said.

Harry was at Monday’s summit at the request of the British government and it could be one of the last times he is seen on official royal duty.

Meghan and Archie are already in Canada, staying on Vancouver Island on the Pacific west coast.

The “Megxit” crisis began on January 8 when the couple announced their plans to seek a “progressive new role” in North America — without having finalised the plans with Queen Elizabeth.

That unilateral assertion of a hybrid role is starkly different from Saturday’s clean-break announcement, following emergency negotiations between the senior royals and their households.

The couple agreed to repay £2.4 million ($3.1 million) of taxpayers’ money spent on renovating their new Frogmore Cottage home on the Windsor Castle estate.

They can maintain their private patronages and associations but must uphold the monarchy’s values in any commercial arrangements they strike.

Monday’s newspapers said the agreement could even strengthen the monarchy and provide a template for other royals in future.

The Daily Express columnist Leo McKinstry said the deal was “the most sensible, constructive arrangement that could have been reached.”

Tim Stanley, writing in The Daily Telegraph, said the agreement was “good for the monarchy because it allows it to define its borders.”

The Daily Mail said that “by fashioning an elegant escape hatch for those unsuited to royal life, the Queen may actually have strengthened the monarchy.”

Meanwhile The Sun welcomed the monarch’s decision to “show Meghan and Harry the door.”

“Their plan to be half in, half out of The Firm was arrogant in the extreme, and would have set a damaging precedent.”

Though the Sussexes want a life lived less in the spotlight, the new arrangements still leave them facing scrutiny.

The couple receive almost all of their funding from the private income of Harry’s father Prince Charles.

Whether that will continue — and who will foot their security bill — remains to be seen.