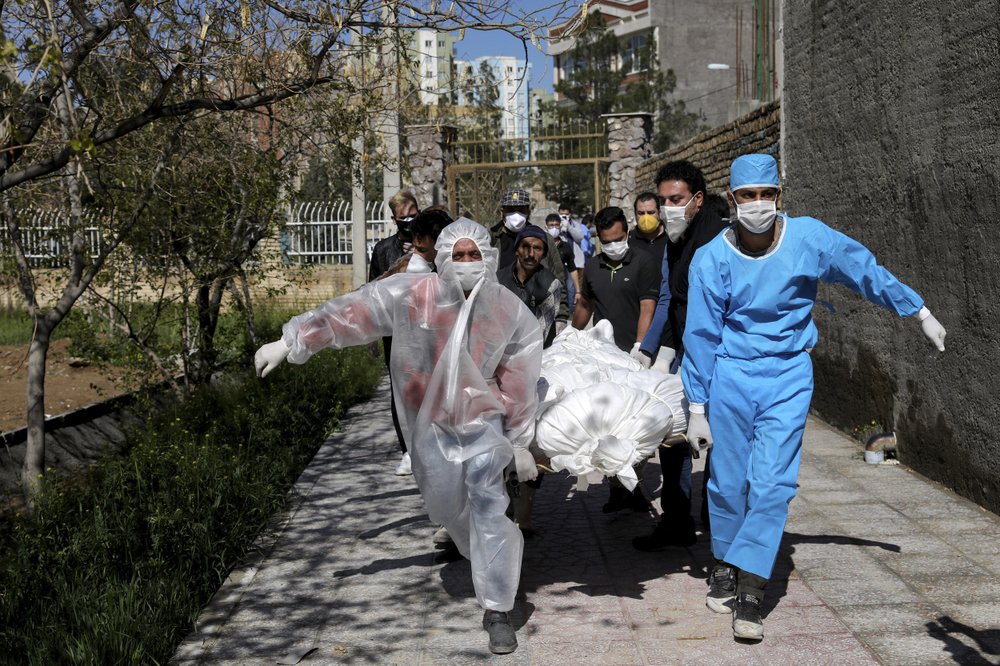 TEHRAN, Iran (AP) — Prisoners in southern Iran broke cameras and caused other damage during a riot, state media reported Monday, the latest in a series of violent prison disturbances in the country, which is battling the most severe coronavirus outbreak in the Middle East.

Iran had temporarily released around 100,000 prisoners as part of measures taken to contain the pandemic, leaving an estimated 50,000 people behind bars, including violent offenders and so-called “security cases,” often dual nationals and others with Western ties.

Families of detainees and Western nations say Iran is holding those prisoners for political reasons or to use them as bargaining chips in negotiations.

The state-run IRNA news agency quoted Gov. Enayatollah Rahimi of the southern Fars province as saying a riot broke out at Adel Abad Prison, the main lockup in the city of Shiraz. Rahimi said prisoners broke cameras and caused other damage in two sections housing violent criminals. No one was wounded and no one escaped.

IRNA reported Friday that 70 inmates had escaped Saqqez Prison in Iran’s western Kurdistan province. Prisoners beat guards during the chaos, a local prosecutor said. Several inmates later returned on their own to the prison.

Since the beginning of the year, riots have broken out in prisons in Aligudarz, Hamedan and Tabriz as well, with some prisoners escaping, IRNA reported.

Iran has reported more than 40,000 infections and 2,757 deaths from COVID-19, the illness caused by the coronavirus, including 117 fatalities in the last 24 hours. The Health Ministry says more than 3,500 people are in critical condition, while around 14,000 have recovered.

The virus causes mild symptoms, including fever and cough, in most patients, who recover within a few weeks. But it is highly contagious and can be spread by people showing no symptoms. It can also cause severe illness and death, particularly in older patients or those with underlying health problems.

The virus has infected more than 720,000 people worldwide, causing more than 34,000 deaths, according to data gathered by Johns Hopkins University. More than 150,000 have recovered.

Elsewhere in the region on Monday, Jordan began releasing thousands of travelers who were quarantined for the last two weeks at five-star hotels on the Dead Sea in order to prevent the spread of the virus.

More than 4,200 Jordanians and 1,500 foreigners have been held at the hotels. The Jordanians will be sent home via Uber, the popular ride-hailing service, and are requested to remain at home for another 14 days.

Travelers with other nationalities will be released on Tuesday. It was not immediately clear where they would go, but authorities said they would be in contact with their embassies and the Foreign Ministry.

Jordan has reported 259 infections and three deaths from the virus. At least 18 people have recovered.

Jordan halted all flights and closed its borders on March 16. It later imposed a round-the-clock curfew for three days, before providing limited times for people to shop for basic goods on foot.

In Egypt, the government extended the closure of the country’s famed museums and archaeological sites, including the Pyramids and the Sphinx at Giza, until at least April 15. Authorities still plan to light up the pyramids on Monday night in an expression of support for health workers battling the virus.

Egypt has reported more than 600 infections and 40 deaths from the virus.

Image: People wearing protective clothing carry the body of a victim who died after being infected with the new coronavirus at a cemetery just outside Tehran, Iran, Monday, March 30, 2020 (AP Photo/Ebrahim Noroozi)