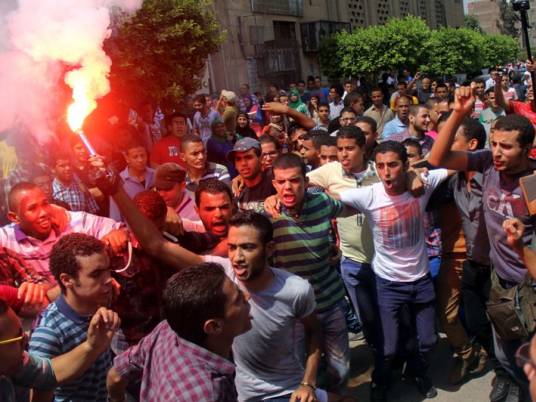 University students loyal to former president Mohamed Morsi called for fresh protests against the incumbent government Monday, in line with the start of the new academic year.
The students’ call came as the Higher Education Ministry warned against protesting without permission.
Students Against the Coup, one of the major groups that led student protests at universities since Morsi’s ouster in 2013, called for new protests now that the academic year has started.
“We are back again, the third revolutionary wave,” the group wrote on its Facebook page, urging students from all universities to attend its demonstrations.
Higher Education and Scientific Research Minister Ashraf al-Sheehy, however, warned during a visit to Alexandria University on Monday that such actions are inadvisable.
“Protesting within campuses without prior approval from the university’s president is impermissible,” Sheehy said. He added that the beginning of the new academic year has for the moment been calm.
Egypt has prosecuted hundreds of students and many have been expelled over the past few years for partaking in protests denouncing Morsi’s overthrow.
Edited translation from Al-Masry Al-Youm