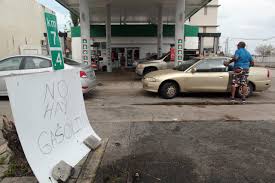 Chan Lo is racing against the clock to save thousands of dollars of supplies at his sushi restaurant in San Juan’s Condado beachfront community.

He has roughly $16,000-worth of perishable goods stored in his restaurant Nagoya Sushi & Tiki Bar – in jeopardy as the battered island waits for power and water to be re-established.

“I give it about three or four days maximum if the (power) doesn’t come back on and there are no generators available,” he said. “Everything will have to be thrown out.”

Puerto Rico’s economy was already fragile before Hurricane Maria barreled into the island, but the strongest storm to hit the US territory of Puerto Rico in nearly 90 years could inflict heavy damage on the island’s health.

Small businesses like Lo’s will be a significant part of the recovery, as they account for 80 percent of all private sector workers, according to a New York Federal Reserve report. And getting energy to them, and to manufacturers and hotels and other engines of the economy will be crucial for the island’s ability to bounce back.

After Maria made landfall midweek on the island of 3.4 million people as a major Category 4 hurricane, the storm’s wind and water downed nearly all power and communications.

Governor Ricardo Rossello said the Puerto Rico Electric Power Authority’s grid was so severely hit by the storm that it could be months before electricity is restored to all customers. Making matters worse, PREPA has been in bankruptcy since July.

Disaster modeler Enki Research estimates damage to the island at $30 billion, with $20 billion in direct physical damage and $10 billion in economic impact.

“Puerto Rico is in a precarious state,” said Chuck Watson, a disaster modeler at Enki.

Puerto Rico has none of the economic might of other places hit hard in this active hurricane season, like the states of Texas and Florida. The island has spent most of the last ten years in recession. Its GDP shrank by more than one percent for seven of the last 10 years through 2016, the poverty rate is over 40 percent and unemployment stands at 10 percent.

The chaos unleashed by the breakdown in basic services, a lack of cash and gas shortages has put many businesses into limbo, and the short-term effects are likely to be severe. Some Puerto Ricans are, however, already looking ahead to the economic boost that could be delivered by investment in the recovery.

The timeliness of US Federal Emergency Management Agency (FEMA) funds will play into how quickly Puerto Rico gets back on its feet, said S&P Global Ratings analyst David Hitchcock.

Meanwhile, the hurricane has pushed back the island’s bankruptcy process. Struggling under $72 billion in debt, Puerto Rico filed the biggest government bankruptcy in US history earlier this year but that is now on the backburner, sources said on Thursday.

“This is an island that has been riddled with bad news,” said Jonathan Mondillo, Alpine Woods Capital Investors LLC, which holds insured Puerto Rican bonds. “It’s going to have a measurable impact on their economy locally.”

In the aftermath of the storm, businesses both big and small around the island were assessing the damage and putting contingency plans in place. Puerto Rico boasts investments from a number of US multinationals, such as Wal-Mart, Amgen and Eli Lilly.

A spokesman for Honeywell International Inc, said the company’s “folks on the ground are making sure everyone’s accounted for and what their needs are … we’re still assessing the facilities.”

Manufacturing is still the heart of Puerto Rico’s economy and any blow to industry could have a significant impact. It makes up nearly 49 percent of the island’s GDP, according to a 2015 report from the Puerto Rico Manufacturers Association.

But the manufacturing sector is much diminished after the US Congress decided to gradually phase out a 1976 tax credit program. That program ended in 2006, after which many companies left and the island had lost nearly half of its manufacturing jobs by 2014.

Just as concerning to the island is likely to be the impact Hurricane Maria has caused to tourism – which will be especially hard felt since it was one area of the economy that had been growing.

Travel and tourism had grown from 7.3 percent of GDP in 2014 to an estimated 8.4 percent in 2017 and was projected to rise to 10.7 percent by 2027, including direct and indirect spending, according to the World Travel & Tourism Council.

Hotels and resorts were struggling to stay open in the days after the hit. Reynaldo Rey, general manager of the AC Hotel San Juan, said businesses were facing a race against the clock if emergency power supplies and water ran out because generators would only keep hotels operating for a few days.

“Everything depends on when the supply lines are re-established,” Rey said. “We risk a complete shutdown.”

Raul Brito, 24, a security guard for the state tourism agency in the capital’s upscale Condado neighborhood, said business was now in limbo at the worst time possible.

“Companies don’t know if they are going to be able to start up again because they don’t know yet if they will have the money,” he said.

A stunned Puerto Rico seeks to rebuild after Hurricane Maria

Hurricane Irma slams Turks and Caicos on path to Florida