Since the “Why Not?” show in February-March of this year, it has almost become a convention to see exhibitions at the Palace of Arts with a question in their titles. But the 12th Cairo Biennale, the bulk of which is housed at the Palace of Arts, went even further. In naming the Biennale, Commissioner Ehab el-Labban, omitted the question, leaving only the mark.

With the title “?”–a somewhat paradoxical gesture of both minimalist reductionism and all-encompassing universalism–one would hope that the Biennale planned to question its own relevance in terms of both the increased transnationalization of the art world and Cairo’s thriving local contemporary art scene, which loudly manifested itself with more than a dozen parallel, or “alternative,” openings.

Instead, the question mark acts as an empty signifier that attempts to conceal the imperative of asking real questions related to its own conditions of production and reception. The Biennale tries to behave like any other “proper” international arts show: eighty artists from more than forty-five countries are presenting here in exhibitions spread across various venues such as the Museum of Egyptian Modern Art, the Palace of Arts and several galleries.

It is democratic enough to house a variety of media, from paintings and drawings to installations and videos; it has a “guest of honour” artist who typically occupies an entire gallery; it acts as a trigger for the contemporary art scene to organize numerous openings in order to be visible to the visiting curators and artists; and, finally, it prides itself on an internationally selected high-profile jury that grants awards to participating artists, the highest of which is the Nile Grand Prize.

Still, the Cairo Biennale is much more radical than one would expect from such an outmoded and inherently conservative institution. But the curatorial risks it does take are, as it turns out, mostly accidental.

The day after the opening, I set off exploring the labyrinthine corners and circles of the Palace of Arts, the arched balconies of the Museum of Modern Art that opened to the main display hall, and the cosy intimacy of El Bab Gallery. I was hoping to escape the constant pressure of interaction and participation demanded by our hyperactive everyday life and indulge in passive pleasure, enjoying the display without having to interact with it.

But my dream did not come true. I ended up walking through the Palace and performing “do it yourself curating”–pushing “play” buttons on TV monitors, DVD players, and computers, and adjusting the contrast and brightness of projections in the lucky scenario that the DVDs were not already missing from the players.  In addition to the “push and view” demands of the show, almost all titles and media specifications were missing from the captions, forcing the viewer and “DIY curator” to construct their own meaning and interpretation.

At times, the exhibition was so radical it was impossible to watch the works altogether. Such was the case with Swedish artist Nathalie Djurberg’s award-winning untitled (as always) video, concealed under the dark pixels of a monitor that refused to work.

But the highlight was Amal Kenawky’s (also untitled) multimedia installation, which won the Nile Grand Prize. Consisting of a meticulously constructed house with a fully equipped kitchen, living room, family photographs, strongly scented flowers, Kenawy’s son Yassin’s drawing, a light and mirror installation, two video projections and a monitor, among various other objects, the installation is Kenawy’s dreamworld. At the Biennale, it is penetrated by the horror of the real.

It is an expensive and labor-intensive installation that has become the victim of the Biennale’s accidental “DIY curating.” While I tried to “empower” myself as a viewer by attempting to figure out which dysfunctional element was intended by the artist and which one was the result of poor planning and installation, I found out that some elements of the work, such as the TV monitor, simply refused to represent anything, and the projector would only project two variations of not-quite-Klein blue.  I was brave enough to trust my abilities as an amateur electrician and switch on the florescent light installation while rifling through a variety of loose electrical wires.

Needless to say, interactivity is exhausting, especially if you came to see a show determined to be a passive viewer. But, thanks to the organizing team of the Cairo Biennale, I felt like a proper curator throughout the two hours I spent in the Palace.

I couldn’t help but wonder whether this pattern of “DIY curating” is to blame for previous local arts-related mishaps, like the Van Gogh painting that was stolen last summer from the Mahmoud Khalil museum. In short, there is an elephant in the art gallery: neglect. 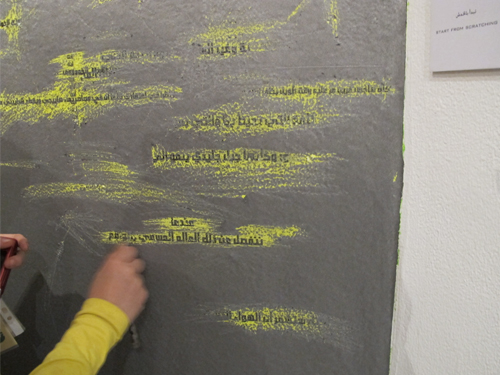 Promising future at the Youth Salon

Did we get in?

Off-Biennale: The megacity through mixed media