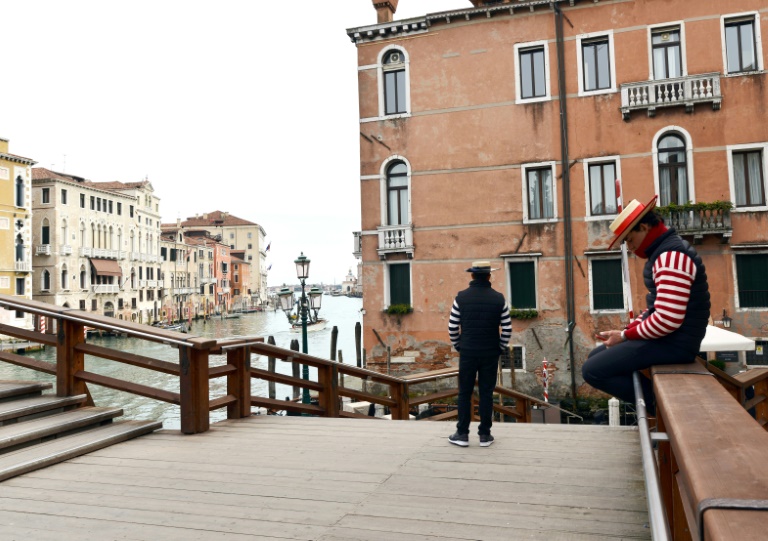 A quarter of the Italian population was locked down Sunday as the government takes drastic steps to stop the spread of the deadly new coronavirus that is sweeping the globe, with Latin America recording its first fatality.

Italy has seen the most deaths from the COVID-19 disease of any country outside China, where the outbreak that has now killed more than 3,500 people and infected over 100,000 worldwide began in December.

The measures in place until April 3 bar people from entering or leaving vast areas of northern Italy without good reason, according to a decree signed by the prime minister and published online.

The quarantine zones are home to more than 15 million people and include the regions around Venice and financial capital Milan, while cinemas, theaters and museums will be closed nationwide.

It comes as Argentina on Saturday became the first Latin American country to report a fatality from the virus that has affected 95 nations and territories.

Anxious passengers aboard a virus-hit US cruise ship were confined to their cabins in waters off San Francisco, after 21 people tested positive for the disease.

The contagion has already spread to 30 US states, killing at least 19 people, with New York announcing a state of emergency.

The Grand Princess ship was given permission late Saturday to dock in Oakland.

Vice President Mike Pence, who is in charge of the US response to the outbreak, said earlier that all 3,533 passengers and crew would be tested for coronavirus and quarantined if necessary.

Meanwhile another cruise ship, the Costa Fortuna, was turned away by Malaysia and Thailand due to virus fears, an official said Sunday. The boat is carrying around 2,000 people, including dozens of Italians.

However in China, the number of new cases reported Sunday nationwide was the lowest in weeks, with nearly all 44 of them in Wuhan, the capital of Hubei province and epicenter of the outbreak.

The government has hinted it may soon lift the quarantine imposed on Hubei, where some 56 million people have been effectively housebound since late January.

The only infections in China beyond Hubei were imported from abroad, including arrivals from Italy and Spain in Beijing.

The WHO said the efforts of China and other countries were “demonstrating that spread of the virus can be slowed” with the path of the disease even “reversed through the implementation of robust containment and control activities”.

As recorded deaths in Italy soared to 233 on Saturday, the Vatican announced Pope Francis’s Angelus prayer — normally delivered by the 83-year-old pontiff from his window — would be broadcast as a livestream.

Italy has the world’s second-oldest population after Japan, according to the World Bank, and elderly people appear to be more vulnerable to becoming severely ill from the virus.

Retired doctors are being recruited to bolster the Italian healthcare system, while civil protection officials say Lombardy region is having trouble finding beds in hospitals.

The number of infections in South Korea passed 7,000 on Saturday — the highest in the world outside China.

Iran’s 21 new deaths from the epidemic and 1,076 fresh cases reported Saturday brought the overall tolls there to 145 dead and 5,823 infected.

The Scotland-France women’s rugby match scheduled for Saturday in Glasgow was postponed after a Scottish player tested positive for the coronavirus, Scottish Rugby said.

Organizers of the Barcelona marathon on Saturday postponed the event, which had been scheduled for March 15, until October 25.

And in Canada, the International Ice Hockey Federation called off the Women’s World Ice Hockey Championships, which had been set to run from March 31 to April 10.

However, access to the Kaaba is still blocked and the Grand Mosque is being sterilized.

Image: AFP / ANDREA PATTARO Italy’s quarantine zones are home to more than 15 million people and include the regions around Venice and financial capital Milan