Like all North Korean adults, Song Un Pyol wears the faces of leader Kim Jong Un’s father and grandfather pinned neatly to her left lapel, above her heart. But on her right glitters a diamond-and-gold brooch.

Song is what a success story in Kim Jong Un’s North Korea is supposed to look like. Just after Kim assumed power in late 2011, she started managing the supermarket floor at a state-run department store, which has freezers stocked full of pork and beef and rows of dairy, bakery and canned goods. She watches as customers fill their shopping carts, take their groceries directly to be scanned at the checkout counter and pay with cash or bank debit cards.

Song is part of a paradigm shift within North Korea: Three generations into the Kim family’s ruling dynasty, markets have blossomed and a consumer culture is taking root. From 120 varieties of “May Day Stadium” brand ice cream to the widespread use of plastic to pay the bills, it’s a change visibly and irreversibly transforming her nation.

While Kim has in recent weeks gained attention for his threat to fire missiles near Guam, his trademark two-track policy focuses on the development of both nuclear weapons and the economy. His acceptance of a more consumer-friendly economy is meant to foster economic growth and bring profits into the regime’s coffers. But like his pursuit of nuclear weapons, it’s a risky business.

Facing even more international sanctions and a flood of Chinese imports that has generated a huge trade imbalance, there are good reasons to believe the North Korean economy is in a bubble that could soon burst. Prices for gasoline imports have soared more than 200 percent in less than six months, the AP has found. The price of rice is also believed to be sharply rising, although harder to independently confirm because of the difficulty in visiting local markets.

The new round of sanctions announced by the UN earlier this month will make it harder for the North to export its goods, cap the number of laborers it can send abroad — an important source of foreign currency for the regime — and limit the growth of joint ventures. North Korea will be hit particularly strongly by a Chinese ban on several key products, including coal, iron ore and seafood.

The problem, however, goes deeper than that.

Market forces bring new forms of competition, uncertainty and change that are the antithesis of the centrally controlled, state-run economy of the North Korea of old. Markets are like a genie offering to grant the wish of wealth, but at the potential cost of political instability. 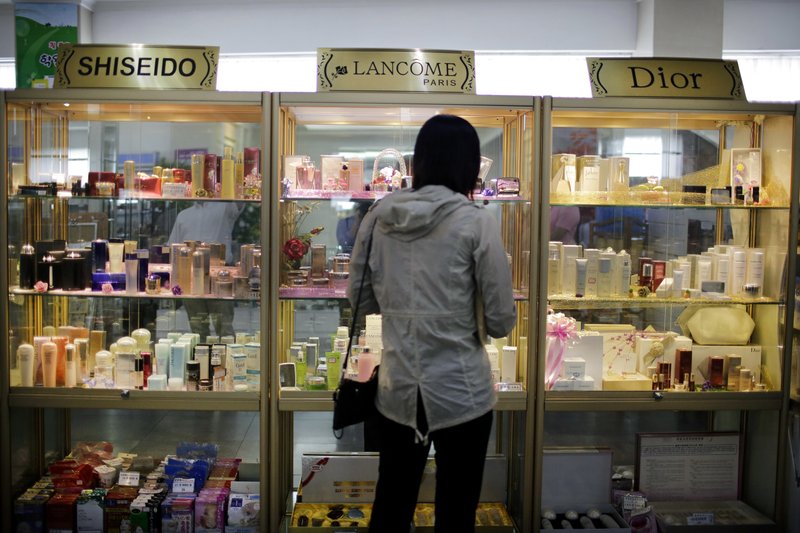 Once the genie has been released from its bottle, it’s very hard to put it back in.

In keeping with his father, whose motto was “Military First,” Kim devotes nearly a quarter of North Korea’s estimated $30 billion GDP to defense spending, which is a far higher military burden than any other country in the world. But his new slogan of “Parallel Development” — guns and butter, so to speak — reflects an inescapable reality of his era:

In the 1990s, North Korea nearly imploded when the Soviet Union and its satellite empire collapsed. Reeling from floods, famine and an overwhelmed bureaucracy, it could no longer afford the public distribution system many North Koreans had depended on for their basic needs. This change sparked a wave of grassroots barter and trade, which has swollen into the burgeoning market economy today.

Life in rural North Korea is still marked by far more hardship and scarcity than in its urban areas, and is hard even to compare to the showcase capital, Pyongyang. Yet there is, surprisingly, a bustling, almost booming, feeling in many parts of the country.

Under a 5-year plan for the economy Kim Jong Un announced last May, North Korean factories are putting a new priority on making more and better daily-life products. Managers, meanwhile, have more freedom to decide what to make, how much to pay their workers and how to forge profitable partnerships.

Along the roads into virtually every city, street vendors, usually weather-beaten old women, sell fruits, vegetables and other food. In the cities, bazaar-style markets, shops and department stores are full of people. The shelves are lined with dozens of brands of domestically made cigarettes, sugary soft drinks and colorfully packaged chips or canned soups. 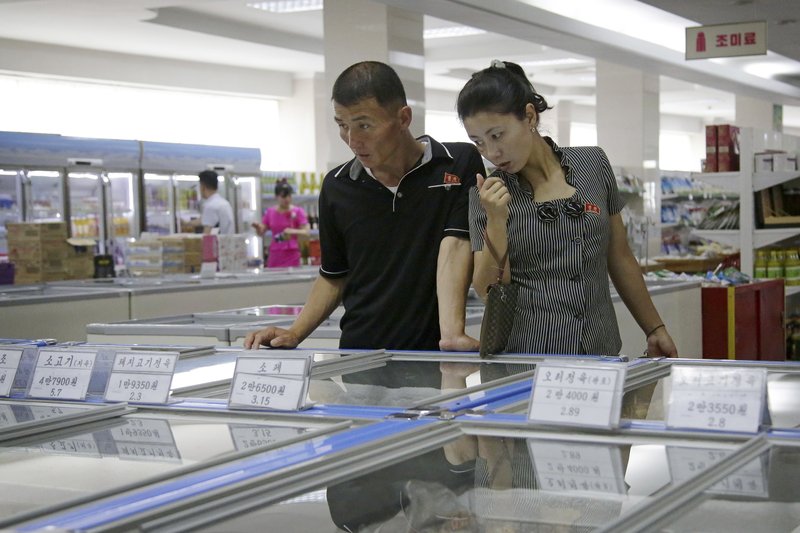 In specialty shops, the latest “Pyongyang” model smartphones, probably Chinese-made but rebranded to have a locally made appearance, go for $200. Apps to put on them, like the popular “Boy General” role-playing game, are $2 a pop. Pyongyang’s premier brewery, Taedonggang, just added an eighth kind of beer to its product line, which already includes beers dark and light, and even one that is chocolatey.

Despite the ever-tightening sanctions, consumer products are still coming in from all over the world. Buying a can of Pokka coffee from Japan is easy, and costs about 80 cents. Purchasing a Mercedes-Benz Viano might require some connections, but it is doable, for a $63,000 sticker price.

On the country’s bumpy highways, caravans of cram-packed long-distance buses and trucks hauling goods from city to city are common. More products made in Pyongyang are found in rural areas these days, and vice versa. Although the use of US dollars or Chinese yuan remains widespread, more people are using prepaid cards or local bills at the checkout counter, suggesting greater buying power in general and more confidence in the stability of the national currency.

Some blatant manifestations of commercialism remain taboo. There are only three billboards in Pyongyang, a city of about 3 million. They advertise the local automaker, Pyonghwa Motors, and are more for the benefit of impressing foreign visitors than selling cars. There are no advertisements on television or in the newspapers.

But stores are under instructions to be more consumer-friendly.

Stores now commonly offer buy-two-get-one-free type sales and discounts on products the management wants to move off the shelves. Posters for new medicines or sports drinks can be seen inside shops and customers can sign up for “loyalty cards” to get points toward ever more discounts. 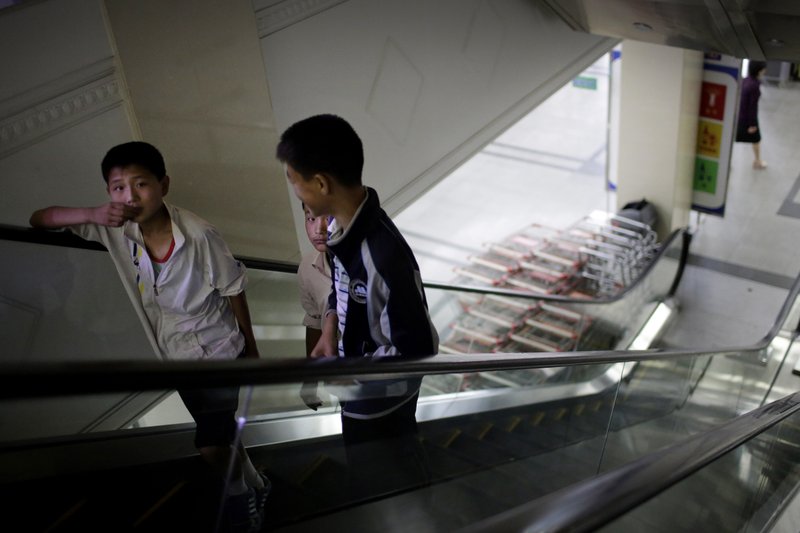 “In today’s North Korea there is a growing competition between the domestic companies themselves as they try to attract customers and establish reputable brands,” said Michael Spavor, a Canadian entrepreneur who visits the North frequently and is one of the only Westerners to have ever met Kim Jong Un.

Spavor calls it a “brilliant strategy.”

But the emphasis on locally produced consumer goods isn’t just because Kim wants to make good on his promise to give his people a higher standard of living.

It’s also an attempt to counter the gravitational pull of China.

THE POWER OF CHINA

As sanctions advocates rightly point out, cutting off trade with China would be catastrophic for Pyongyang. But North Korean leaders, including Kim Jong Un himself, have shown a great deal of concern over the flip side of that coin: what might happen to their country if trade continues, or grows even larger.

The expansion of trade increases Chinese leverage on the ground and feeds market forces that are hard for Pyongyang to keep under control. China already accounts for nearly all of North Korea’s trade and its fuel. While the North has minimal dealings with the rest of the world, it did $2 billion worth of business with China in the first five months of this year alone.

During Kim Jong Un’s first three years in power, North Korea’s exports to China of coal, garments, minerals and seafood were all growing. But what North Korea was able to sell to China fell far short of what it needed to buy, particularly because of its need for oil and fuel products.

That imbalance has widened dramatically this year as China cut back on buying from the North. The new U.N. sanctions will further squeeze the North’s main sources of export income.

Georgetown University economist William Brown estimates the North is suffering an outflow of $200 million in foreign exchange every month. This is crucial because the more Pyongyang owes Beijing, the less it has to spend on other things. But it still needs essential commodities like food and fuel, which can deepen the problems of both shortages and inflation.

Signs of trouble are already appearing.

Right around April, according to data compiled by the AP, gasoline prices started to soar. Many stations either closed their gates or restricted the amount they would sell each customer. As of late July, the price surge had yet to abate.

Few North Koreans have their own cars. But gasoline, virtually all of which comes from China, fuels the transportation of goods and people in the new economy.

Brown said the price of rice was also up nearly 20 percent in July from May and was significantly higher than a year ago. There could be a trickle-down effect, since tractors and even the fertilizer used to grow rice require petroleum products. Fears of a poor harvest in the fall could send prices shooting up much higher.

“This may represent the greatest near-term threat to the regime stability,” Brown said.

North Korea has proven it is nothing if not resilient, often finding a way out of its economic problems. Even so, the longer-term changes to society won’t be easy to address.

The goods and trading opportunities spilling across the Chinese border are also spurring the growth of profitable enterprises, which has substantial financial benefits for well-connected individuals and, at least initially, the regime’s elite. For this tier of North Korean society — and for farmers who can profit from their excess produce, the new economy has opened up a way to get money from sometimes under-the-table businesses.

Loyalty to the regime and party ties remain an important means of social advancement. But, in Kim Jong Un’s North Korea these days, so is a good sense for how to run a proper side hustle to augment what are often paltry official paychecks.

However, the same opportunities have widened the gap between the rich by North Korean standards and the poor. The haves benefit disproportionately from the new economy, while a far larger number of have-nots live mostly outside the Pyongyang bubble of affluence. Ambiguity over what officials will overlook and what they will strictly enforce has also created a gray area that opens the door to corruption and bribery. 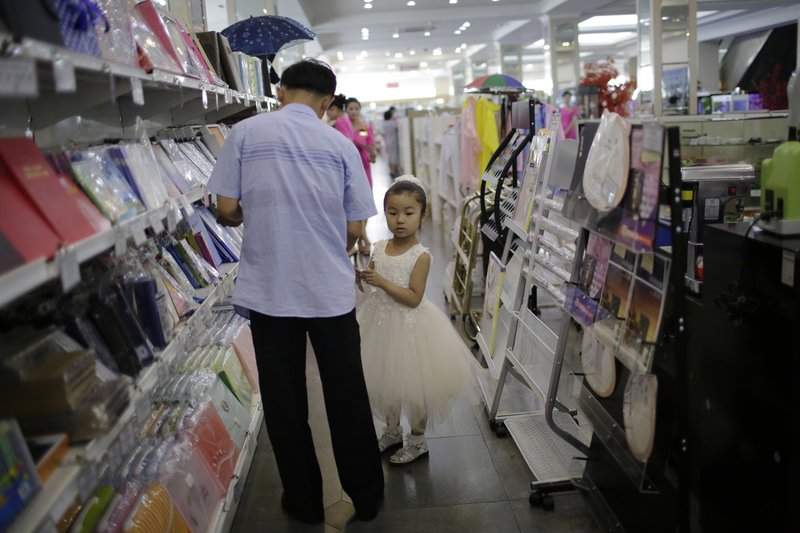 The regime is not blind to what’s happening. It knows the new consumerism can be a destabilizing force. But it also knows it needs the markets.

North Korean officials insist markets are a stopgap coping measure for the economy that will be overcome. Kang Chol Min, a researcher with the Economics Institute of the Academy of Social Science, said the regime is trying to produce more, and better, goods to woo consumers away from the markets and back to state-run businesses.

“The number of people relying on the state-run commercial networks is increasing,” he said in an interview with AP Television News.

But many outside experts believe state enterprises and farms are too inefficient to provide enough goods and services for the whole nation without the help of markets and private activities.

If they are right, it’s hard to imagine North Korea’s economic future will lie in Kang’s vow to produce more goods locally. Nor is it likely to be model worker Song, the state-sanctioned success story.

Miniso is decidedly not trying to appeal to the shoppers by filling its shelves with products made in North Korea. It’s an international brand name, found in Hong Kong, Tokyo, Sydney, selling bargain-priced goods such as backpacks and consumer electronics. Its Pyongyang store just opened in April, near two of the capital’s most prestigious universities in a newly built high-rise district appropriately called Ryomyong Gori, the “Avenue of Dawn.”

It’s the trendiest shop in town.

And it’s a joint venture. With China.