The coral reefs at the Red Sea reserves are in grave danger as a result of rising environmental violations including illegal fishing by trawlers, whose nets threaten Egypt’s national wealth of coral reefs and wildlife and have harmed sea turtle and dolphin populations.

Marine environment preservation associations have confirmed that overfishing is one of the biggest threats to the Red Sea’s environment, as many fish species are being captures en masse while coral reefs are cracked apart.

These fishing nets extend kilometers across the coral reefs within the borders of the Northern Islands Reserve, which is protected by Law #102 of 1983 which forbids any acts that harm the environment and wildlife.

Red Sea marine workers have monitored the destruction of coral reefs in the areas of Al-Fanous and Al-Araq in northern Hurghada, caused by overfishing inside the Northern Islands Reserve.

Divers in Hurghada confirmed that overfishing is on the rise, due to marine patrols failing to cover certain areas due to the expiration of navigational licenses and the failure of the Maritime Inspection Office to issue new ones for patrols operating in the Red Sea Reserves Administration.

The workers have called for more marine patrols to help curb the rising threat of overfishing, alongside preventing any illegal violations or environmental actions while and enforcing the Red Sea’s environment and natural reserves law. 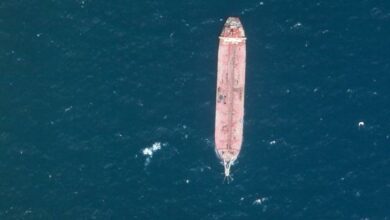 Group warns of potential catastrophe on old tanker off Yemen