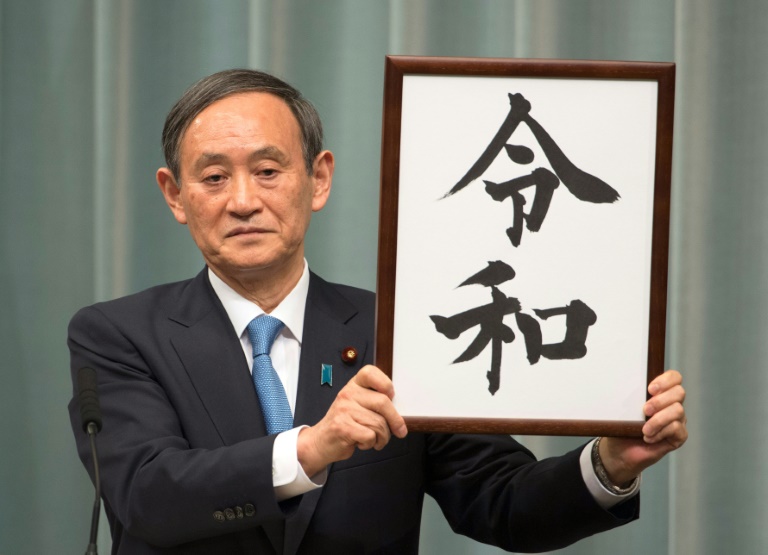 “Reiwa”: Japan on Monday revealed the name of the era that will define the new emperor’s reign when he ascends the Chrysanthemum Throne next month following a historic abdication.

The new imperial name consists of two characters: “Rei”, which can mean “order” but also “auspicious” and “Wa”, usually translated as “peace” or “harmony.”

After weeks of fevered speculation and top-secret discussions, the two “kanji” characters were unveiled to reveal a name that will last as long as new emperor Naruhito’s rule.

The 85-year-old Emperor Akihito will become the first Japanese monarch to abdicate in around two centuries when he steps down on April 30 in favour of Crown Prince Naruhito, who will take the throne the next day.

Prime Minister Shinzo Abe said the term “Reiwa” came from the “Manyoshu”, an anthology of Japanese poems dating back 1,200 years that “symbolizes our nation’s profound public culture and long tradition.”

“Just like amazing plum flowers in full bloom that signal the arrival of spring after bitter cold, each and every Japanese person can hope for the future and make their own flowers blossom,” added the prime minister.

“It is the first time it comes from a Japanese text” rather than Chinese, noted Abe, often considered a nationalist.

Crowds gathered around Japan to watch live broadcasts of the announcement, many cheering as the chief cabinet secretary held up a board with the name inked in stylized black calligraphy.

“It has a nice sound and you get a good feeling when you read it. It’s a very good choice I think,” said 24-year-old Shun Fujimoto as he joined a chaotic scrum for a special edition of the papers at Tokyo’s busy Shimbashi station.

Eight-year-old Manato Nagayama also managed to get his hands on a copy of the extra edition but admitted “I cannot yet write those two kanji.”

His father told AFP it was a “historic” moment. “That’s why I brought my son here so he could get a special edition. It’s an experience that only comes along very rarely. He is only eight and is already seeing two eras.”

It may appear esoteric to outsiders, but the announcement of a new era name is a massive event in Japan, marked with calligraphy shows and public festivities.

Although the Gregorian calendar is widely used in the world’s third-largest economy, Japan is the only country still using Chinese-style imperial calendars for private and public documents as well as computer records.

The new name therefore has a huge impact on daily life and people tend to recall major events in public and private life by when they fell in a certain era.

A highly secretive nine-member panel including a Nobel Prize winner whittled down various options for the new name in closed-door talks.

The era name must adhere to strict guidelines.

It should consist of only two “kanji” or characters, be easy to read and write, and not employ common names or the first character of any of the last four eras: Heisei, Showa, Taisho and Meiji.

Company names are excluded as well as the most popular choices in private guessing competitions, amid widespread speculation online as to what the new name could be.

To prevent leaks, the panel were locked away in a special room in the prime minister’s office, swept for bugs, and their phones confiscated.

No official translation was immediately available but Ryan Shaldjian Morrison, a lecturer at Nagoya University of Foreign Studies and Japanese literature expert, told AFP: “To my mind, ‘venerable harmony’ is the most appropriate English translation.”

Japan is marking the announcement of the new era in a wide variety of ways, some less serious than others.

A sake company offered a vintage bottle from the first year of the Heisei era (1989) to anyone who correctly guessed the new name, while a grand hotel is marking the occasion with a three-kilogram wagyu beef burger served between gold-dusted buns for an eye-watering $900.

Japan has had nearly 250 eras or “gengo” since adopting the system in the 7th century, and in recent times, one era has run the entire length of a monarch’s rule.

But the announcement of a new era is a real headache for calendar publishers featuring both Western and imperial dates, while central and local governments must scramble to change dates on official documents.

The tech sector is also bracing for the transition, amid fears there could be a computer glitch similar to the “Y2K” bug that sparked concerns ahead of the year 2000.

Others view the change in era name as a bonanza.

For example, companies that manufacture private ink seals — commonly used in Japan to sign official documents — are expected to benefit and they have already reported brisk advance orders.

Japanese emperor stresses his peaceful reign ahead of abdication