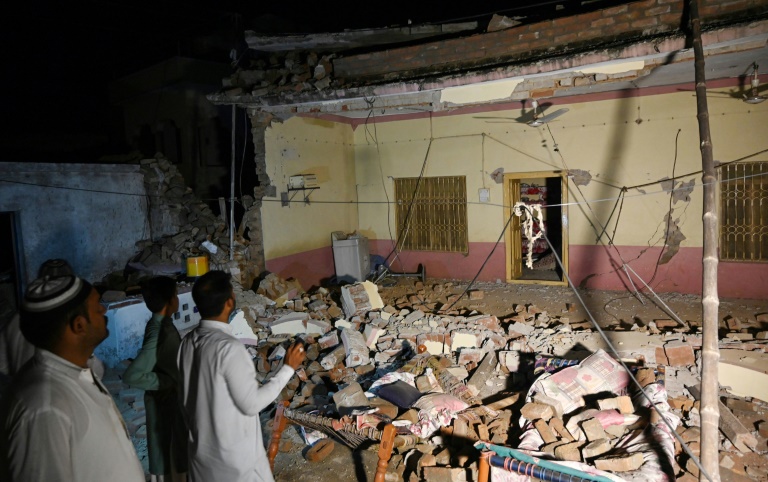 Rescuers battled along badly damaged roads and combed through toppled buildings Wednesday to reach victims of an earthquake that killed at least 25 people and injured hundreds more in northeast Pakistan.

Authorities were still trying to assess the quake’s impact in more remote parts of Pakistan-controlled Kashmir, but in built-up areas the immediate damage was evident.

After a night of heavy rain compounded the misery of survivors, hundreds gathered to attend the funerals of residents killed near the city of Mirpur, about 130 kilometers (80 miles) southeast of the capital, Islamabad.

“It was like doomsday for us. We lost a number of our near and dear ones,” Muhammad Azam told AFP at a funeral for a neighbor. “Our loved ones will never come back.”

The 5.2 magnitude quake was not as strong as several that have struck the area over the years, but the epicenter was very shallow — which generally causes more damage.

Near Mirpur, a well-developed city known for its palatial residences, many roads were destroyed, while bridges, mobile phone towers and electricity poles were also badly damaged.

The village of Jatlan on the outskirts of Mirpur appeared to be one of the worst affected.

There, residents combed through debris and assessed the damage inflicted on their homes, with large cracks defacing walls in the houses that still stood, and brick fences reduced to rubble.

“I lost my house. I lost everything,” said Abdullah Khan, whose three-bedroom home was flattened.

The Pakistan military continued to lead search and rescue operations.

Lieutenant General Mohammad Afzal of the National Disaster Management Agency (NDMA) said 25 people had been confirmed killed so far — 24 in Mirpur and one in the nearby city of Jhelum.

“Some 350 people were wounded, 80 of them critically,” he told a press conference Wednesday.

Teams of doctors had arrived in the area, while the NDMA had also sent hundreds of tents, bottles of water and food rations.

Afzal said 450 houses had been damaged — 136 of them “completely” — while 14 kilometres (nine miles) of road was “badly affected”. Engineers were rushing to make repairs.

He said the ambassadors of three countries had offered assistance, but that Pakistani authorities had the matter under control.

Information minister Firdous Ashiq Awan gave a higher injury toll of 500, and told reporters that survivors would be offered compensation.

Mirpur’s deputy commissioner, Qaiser Aurangzeb, said rescuers had also reached one of the more remote villages in the area and were assessing the damage caused by the quake.

In Mirpur, life was quickly returning to normal and most of the well-built structures in the city showed little sign of damage.

Mirpur owes its prosperity to thousands of former residents who migrated to Britain in the 1960s, but retained their links to the area — repatriating money to buy land and build palatial homes. Many of its 450,000 residents are dual British-Pakistan nationals.

Local hospitals in the city swelled, however, with many patients suffering from multiple fractures.

“I was going to see a friend when the entire area shook with a bang and a huge wall crumbled over me. When I regained my senses I found myself here in this bed,” Ali Badshah, a fifth-grade student, told AFP from a hospital in Mirpur, where he was being treated for a broken leg.

The quake sent people in Lahore and Islamabad running into the streets, while tremors were also felt as far as New Delhi.

The Press Trust of India reported that panicking people rushed out of their homes and offices in Rajasthan, Punjab, and Haryana.

Pakistan straddles part of the boundary where the Indian and Eurasian tectonic plates meet, making the country susceptible to earthquakes.

The country was hit by a 7.6-magnitude quake in 2005 that killed more than 73,000 people and left about 3.5 million homeless, mainly in Pakistan-controlled Kashmir.

Image: AFP / AAMIR QURESHI Mirpur is a city known for its palatial houses and has strong ties to Britain