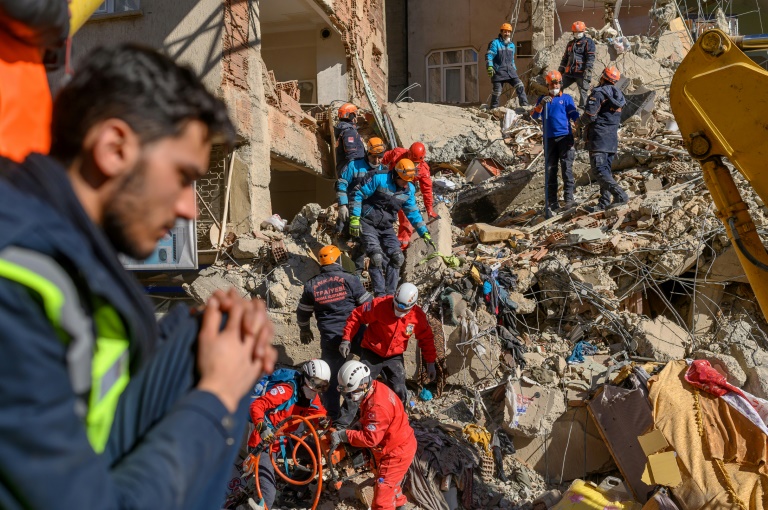 A dozen people bundled up in colorful blankets crouched around a makeshift fire in eastern Turkey. It is an icy night in Elazig and Esra Kasapoglu shivers but she says “it’s out of the question to return home.”

Several residents in Elazig, the province that was struck by a powerful 6.7 magnitude earthquake Friday evening, preferred to spend another night outside, despite temperatures reaching minus 10 degrees celsius (14 Fahrenheit).

An aftershock with a 5.1 magnitude on Saturday night heightened residents’ fears, with thousands rushing into the streets, shouting “earthquake, earthquake!”

There have been more than 500 aftershocks with magnitudes ranging between 1.0 an 5.1, according to the Turkish government’s disaster and emergency management agency (AFAD), following Friday’s quake which killed 31.

“Our building is old and there are small cracks. God knows if it will survive in the event of another earthquake. We’ll stay here all night,” Kasapoglu says.

“Our psychology has taken a hit. Earlier, my son ran out of the house shouting when a jacket fell off the coat rack.

“When I am at home, I watch the chandelier every minute to see if it does not swing,” she adds.

Further away, leaning against a wall opposite the building where they live, Abdi Guney and his family wait.

“Every time it shakes, you get scared. We’re forced to rush outside. Earlier, I was doing my ablutions before prayer and suddenly the building started shaking,” Guney says.

“We were forced to go outside. Like last night, we were already here,” he adds, while his neighbors bring him and his family something to eat.

According to Interior Minister Suleyman Soylu, over 15,000 people are being accommodated in gymnasiums and in schools, while more than 5,000 tents have been set up in the city to house residents.

But “the gyms are full and there are no more tents,” Guney laments. “So we have to wait here.”

Across Elazig city, home to around 350,000 people, owners of restaurants, hotels and even wedding salons opened their doors to accommodate anyone who wants to spend the night there. Now is the time for solidarity.

But many prefer to leave Elazig.

Fatih, a hunched man with a thick mustache, puts his daughter in the backseat of his car while his wife hurriedly throws bags in the trunk.

Where are they going? “To the village,” he says, pointing to somewhere in the distance. “My parents live there, it will be better there.”

Between those who prefer to sleep outside and those who decide to leave, few lights come on after dark. Some districts take on the appearance of a ghost town.

Murat, a 40-year-old restaurant owner, is the only resident in his five-story building who opted to stay.

“One can’t run away from fate,” he says, putting out a cigarette on the floor.

Among the residents who prefer to try nonetheless, some were especially well-prepared.

Drawing a lesson from earthquakes that regularly strike the Elazig region, Ismail Karacan and his wife built a prefabricated building five years ago in the middle of an orchard they own on the outskirts of the city.

Such a building has light walls and roof which means that individuals inside would not be seriously hurt if it collapsed.

“I think we’ll stay there at least a week,” he says.