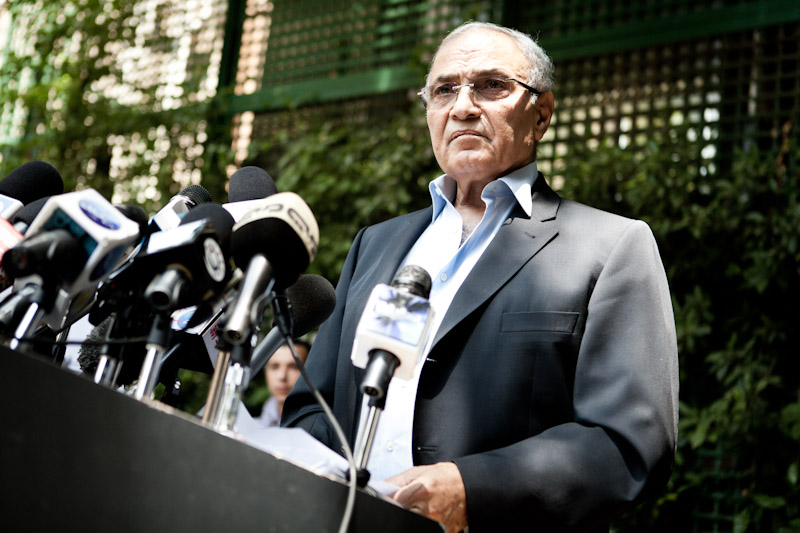 , which bans certain high-level officials from the former regime from running for public office. But the law’s application is not simply in the hands of revolutionaries demanding a break from the past. It has now moved into a murky and convoluted legal proceeding in which the outcome is anything but clear.

The independent newspaper Al-Shorouk reported on Thursday that the legal advisers to the Supreme Constitutional Court (SCC) recommend that the court, which is set to rule on the Political Isolation Law’s constitutionality, reject hearing the case in the first place and, failing that, suggest that the court declare the law unconstitutional.

The law, which was passed by Parliament and approved by the Supreme Council of the Armed Forces in April, would bar high level members of former President Hosni Mubarak’s regime from running for president. Shafiq was appointed Prime Minister during the president’s embattled last days in office. The Presidential Elections Commission (PEC), which oversees the election, admitted Shafiq to the race pending the SCC’s review of the law.

In their report, the constitutional court’s commissioners said that the PEC did not have the jurisdiction to refer the law to the SCC because the elections commission is an administrative, rather than legal body, despite the fact that it is composed of senior judges, including the head of the SCC.

The commissioners simultaneously presented another recommendation to the court, deeming the law unconstitutional in the event that the court accepts the elections commission’s referral, which would mean that Shafiq remains in the election.

The court is scheduled to start hearing the case on 14 June, two days before the presidential runoff between Shafiq and the Muslim Brotherhood’s Mohamed Morsy begins.

It is possible that the court will ignore the advice of the commissioners and accept the PEC’s referral of the case, and even go as far as to rule that the Political Isolation Law is constitutional. In this case, Shafiq will be disqualified from the race and elections will have to be repeated all over again with 12 candidates instead of the original 13 who participated in the first round, according to Tareq Khedr, a professor of constitutional law at the Police Academy.

According to Khedr, if the court’s decision came after Shafiq had already won the election, his presidency would be considered illegitimate and the election would have to be repeated.

If the court heard the case but ruled the Political Isolation Law unconstitutional, Shafiq will maintain his political participation rights and will stand in the runoff, or he will remain president if this verdict is issued after the election, Khedr told Egypt Independent.

In both scenarios, the court’s verdict will be final. SCC verdicts are binding and cannot be appealed.

Khedr believes that the elections commission has the jurisdiction to refer the law to the SCC, in contradiction to the commissioners legal opinion.

“The PEC has a legal as well as an administrative nature,” he said, basing his argument on Article 28 of the SCAF-issued Constitutional Declaration which stipulates that the PEC consists of five judges and has the role of ruling on candidates’ appeals to the commission. That makes the elections commission a legal committee with the right to refer laws to the SCC, according to Khedr.

The SCC commissioners say that the elections commission is a judicial committee that has an administrative function. They added that the PEC is not a court, and thus cannot be an adversary and judge at the same time with regard to the candidates.

In a third, even more complex scenario, the SCC could refuse to hear the elections commission’s appeal entirely. This means that the law would remain in effect and Shafiq would be disqualified, leading to a repeat of the election, said Qandil.

“However, in that case, Shafiq has the right to appeal his disqualification in front of a court. The court could then refer the isolation law to the SCC if it doubted its constitutionality,” he added.

In addition, Khedr argues that the isolation law is unconstitutional in his own opinion. “A law can not punish someone for crimes committed before it goes into effect,” he said.