MOSCOW (AP) — Russia’s top diplomat said Friday that Moscow will not start a war but warned that it wouldn’t allow the West to trample on its security interests amid fears it is planning to invade Ukraine.

U.S. President Joe Biden warned Ukraine’s president a day earlier that there is a “distinct possibility” that Russia could take military action against its neighbor in February.

“There won’t be a war as far as it depends on the Russian Federation, we don’t want a war,” Foreign Minister Sergey Lavrov said in a live interview with Russian radio stations. “But we won’t let our interests be rudely trampled on and ignored.”

Tensions have soared in recent weeks, and the United States and its NATO allies worry that the concentration of about 100,000 Russian troops near Ukraine heralds Moscow’s intention to attack the ex-Soviet state. Russia has repeatedly denied having any such plans, but has demanded that NATO promise Ukraine will never be allowed to join and that the alliance roll back deployments of troops and military equipment in Eastern Europe.

The U.S. and NATO formally rejected those demands this week, though Washington outlined areas where discussions are possible, perhaps offering a path to de-escalation.

Russia’s official response to those proposals — and the ultimate decision over whether to invade — rests with President Vladimir Putin, but the Kremlin has sounded a grim note thus far, saying there is “little ground for optimism.”

Lavrov noted Friday that the U.S. suggested the two sides could talk about limits on the deployment of intermediate-range missiles, restrictions on military drills and rules to prevent accidents between warships and aircraft. He said that Russia proposed discussing those issues years ago — but Washington and its allies never took them up on it until now.

While he described the U.S. offers for dialogue on confidence-building measures as reasonable, he emphasized that Russia’s main concerns are to stop NATO’s expansion and the deployment of the alliance weapons near Russia’s borders. He noted that international agreements say that the security of one nation must not come at the expense of others’ — and that he would send letters to ask his Western counterparts to address that obligation.

“It will be hard for them to wiggle out from answering why they aren’t fulfilling the obligations sealed by their leaders not to strengthen their security at the expense of others,” he said.

Asked about possible sanctions, Lavrov said that Moscow had warned Washington that their introduction would amount to a complete severing of ties.

While Moscow and the West are mulling their next steps, NATO said it was bolstering its deterrence in the Baltic Sea region, and the U.S. ordered 8,500 troops on higher alert for potential deployment to Europe.

Russia has launched a series of military drills involving motorized infantry and artillery units in southwestern Russia, warplanes in Kaliningrad on the Baltic Sea, dozens of warships in the Black Sea and the Arctic. The Russian military also has moved troops to Belarus, which borders Ukraine, for sweeping joint drills, raising Western fears that Moscow could stage an attack from the north.

While concerns rise about an invasion, Ukraine is already beset by conflict. Following the 2014 ouster of a Kremlin-friendly president in Kyiv, Moscow annexed Ukraine’s Crimean Peninsula and backed an insurgency in the country’s eastern industrial heartland. Fighting between Ukrainian forces and Russia-backed rebels has killed over 14,000 people, and efforts to reach a settlement have stalled. 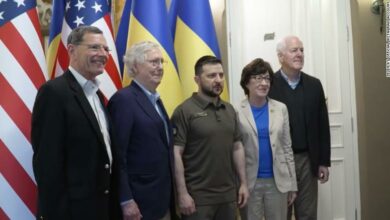