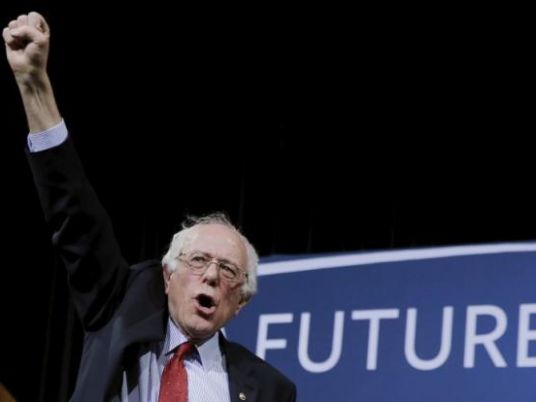 Democratic presidential front-runner Hillary Clinton has spent about US$15 per vote so far in the race for the party's nomination, less than her rival Bernie Sanders, who spent $22, according to campaign finance reports filed on Wednesday.

Clinton's efficiency with money could offset concern among some of her backers that Sanders, the U.S. Senator from Vermont, has outraised her in each of the last two months as he wages a fierce fight to get onto the presidential ballot.

Sanders, in turn, has spent $168.4 million since launching his bid for the White House, while netting 7.7 million votes.

Sanders' campaign has often touted its ability to tap a large number of small donors to outraise Clinton. In March, Sanders pulled in nearly $46 million from 900,000 people, with an average donation of just over $26, it said.

Some 96 percent of Sanders' donors have given less in total than the $2,700 maximum, according to his campaign, meaning he can go back to them for more funds.

Some of Clinton’s backers say they are nervous about her campaign’s fundraising strategy of relying heavily on donors who are able to write big checks, and who max out more quickly.

"I think we’re going to see her doing more small dollar fund raisers," said Lorraine Hariton, who has raised more than $100,000 for the campaign.

But the Clinton campaign's spending efficiency has helped it preserve a warchest. At the end of March, Clinton had $29 million left in the bank — more than anyone else running for president. Sanders had just $17 million.

Preserving the war chest is crucial for Clinton’s chance of winning the White House in the general election against a Republican, letting her campaign effectively in swing states, attack her opponent's vulnerabilities and defend her own.

Should she face off against Republican front-runner Donald Trump, she will need a bank account sufficient to compete with a candidate who has mastered the knack of earning free coverage.

Approaching the end of the primary campaign with a surplus is a far different scenario from the one in which Clinton found herself at the end of her failed 2008 bid for the nomination against Barack Obama, when she ended up $9.5 million in debt.

An example of the campaign's frugality: it cut advertising spending by $5 million to $12 million in March, a month heavy with primaries and caucuses, by using more digital advertising instead of television ads.

Clinton spent only $1.6 million on digital ads. The campaign also reduced real estate costs and limited increases in payroll as it staffed up.

"We set ambitious goals to ensure we'd have the resources we need to win a competitive primary and we've blown past every goal, recently surpassing the million-donor mark," spokesman Josh Schwerin said.