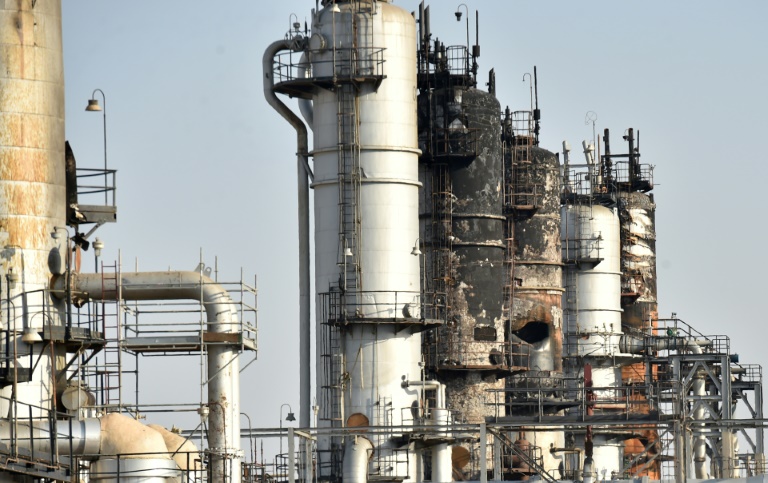 Yemen’s Tehran-linked Huthi rebels, who on Friday announced a sudden halt to attacks on Saudi Arabia, claimed the strikes on state giant Aramco’s facilities in Khurais and the world’s largest oil processing facility at Abqaiq.

But Washington has pointed the finger at Tehran, condemning an “act of war” which knocked out half of Saudi Arabia’s oil production and on Friday prompted US President Donald Trump to sketch out the latest in a series of economic sanctions against Iran.

Abqaiq was struck 18 times while nearby Khurais was hit four times in a raid that triggered multiple explosions and towering flames that took hours to extinguish, Aramco officials said.

“Many critical areas of the (Abqaiq) plant were hit,” an Aramco official said, pointing out the strikes had a high degree of precision.

A towering stabilisation column, normally silver, had been charred black with a gaping hole blown in the shaft’s base.

A separator plant also appeared ravaged in the raids and was surrounded by scaffolding and white-helmeted workers.

Aramco said it was shipping technical equipment from the US and Europe to speed up repairs.

Aramco flew dozens of international journalists to the two sites to show it was speeding up repairs, giving rare access to the nerve center of the world’s largest oil producer as it seeks to shore up investor confidence ahead of a planned initial public offering (IPO).

“We will have production at the same level as before the strike by the end of this month — we are coming back stronger,” asserted Fahad al-Abdulkareem, an Aramco general manager, during the visit to Khurais.

Badly warped thick metal piping — peppered with shrapnel during the aerial strikes — lay strewn around the area of the Khurais attack.

But Abdulkareem said that 30 percent of the Khurais plant was operational within 24 hours of the initial strikes.

Industry analyst Alex Schindelar, president of the Energy Intelligence group, said that restoring sustainable production capacity to 11 million barrels per day by the end of the month is an “ambitious target, given the amount of repairs required”.

Tehran has denied responsibility for the attacks against the heart of Saudi Arabia’s all-important oil industry, raising the spectre of “all-out war” in the event of retaliatory measures by Washington or Riyadh.

The rhetoric has raised the risk of an unpredictable escalation in a tinderbox region where Saudi Arabia and Iran are locked in a decades-old struggle for dominance.

Chinese President Xi Jinping condemned the attacks but called for restraint during a phone call with Saudi Arabia’s King Salman on Friday.

US Secretary of State Mike Pompeo said Thursday there was “enormous consensus in the region” that Iran executed the attacks, despite its denials and the Yemeni rebels’ claims.

The Huthi rebels announced late Friday “the halt of all attacks against the territory of Saudi Arabia” as a peace initiative to end the country’s devastating conflict. There was no immediate reaction from Saudi authorities.

Huthi rebels have previously hit dozens of targets in Saudi Arabia, and their advancing arsenal has exposed the kingdom’s vulnerability despite vast military spending.

US, French and Saudi officials have disputed the Huthi claims, insisting they do not have the capability to mount such an advanced, coordinated strike.

Trump earlier this week vowed substantial new sanctions against Iran in response to the attacks and told reporters Friday they would target the country’s central bank.

The US Treasury Department said these latest sanctions were linked to “terrorism”, alleging Iran’s central bank had provided “billions of dollars” to two forces blacklisted by Washington.

“Treasury’s action targets a crucial funding mechanism that the Iranian regime uses to support its terrorist network, including the Qods Force, Hezbollah and other militants that spread terror and destabilize the region,” said Treasury Secretary Steven Mnuchin in a statement.

The Qods Force conducts international operations for Iran’s elite Revolutionary Guards, while Hezbollah is a powerful Shiite movement in Lebanon.

The Saudi defense ministry, which has said the attack was “unquestionably sponsored by Iran”, this week unveiled what it said were fragments of 25 drones and cruise missiles fired at the two oil hubs.

Iraq’s stability on the line as US, Iran tensions soar

Analysts: Weapons in Saudi attack similar to Iranian ones

Saudi to announce oil attacks findings as US weighs retaliation