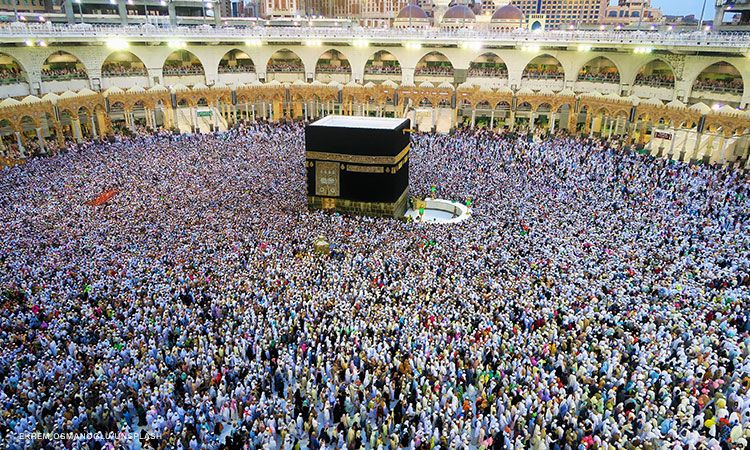 Saudi Arabia “temporarily” suspended entry to the Kingdom for the purpose of Umrah and visiting the Prophet’s Mosque in Medina on Thursday, amid growing fears over the spread of the coronavirus in the Middle East and other pockets outside China.

The kingdom further suspended entry of tourists coming from countries where the coronavirus has spread, as the World Health Organization confirmed that new cases outside China are now rising at a faster rate than those recorded in the epidemic’s epicenter.

Saudi Arabia took the preventive measures in a bid to counter the epidemic before it reaches the Kingdom, which has seen no cases of the new virus so far.

Saudi nationals and citizens from Gulf Cooperation Countries (GCC) are temporarily suspended from using national identity cards to travel to and from the kingdom, the ministry added.

The move does not apply to Saudi nationals abroad who exited the kingdom using their national identity cards and now wish to return.

GCC citizens in Saudi Arabia who entered the kingdom using national identity cards and who wish to return to their countries of residence are also excluded from the travel restrictions, the ministry noted, provided that the concerned authorities at the entry points can verify from which countries visitors came before their arrival to the kingdom.

“These measures are temporary, and subject to continuous evaluation by the competent authorities,” the ministry asserted, renewing its support for international measures aiming to limit the spread of coronavirus. Measures to stop the spread of COVID-19 include travel restrictions, flight suspensions, and quarantine procedures, as well as efforts to stop the spread of the virus in cities where cases have already appeared through the cancellation of public events and steps to disinfect buses and subways.

The ministry asked Saudi nationals to avoid traveling to countries where the coronavirus has appeared.

Kuwait, Bahrain, Oman, Lebanon, Iraq and Afghanistan have all recently confirmed their first cases of the coronavirus, with the UAE having recorded 13 cases of the virus since late January.

On Thursday, confirmed cases in Bahrain rose to 33, with the government moving to suspend flights to Iraq and Lebanon. Iraq, meanwhile, has recorded six cases, all linked to travel to and from Iran, with the virus having spread rapidly from the Islamic Republic across the Persian Gulf.

Meanwhile, the death toll in Iran rose to 22 on Thursday, amid over 140 cases of the virus. An Iranian MP alleged earlier this week that 50 people had died of the coronavirus in Qom alone, a figure disputed by authorities.

The Middle East has recorded 230 cases of COVID-19 so far, according to The Associated Press.

The GCC has announced a state of alert while taking several preventive measures such as banning the entry of travelers coming from the countries recording the highest rates of infections and deaths, especially from China, Iran, Italy and South Korea, to limit the spread of Coronavirus.

The coronavirus, which originated in the central Chinese city of Wuhan in December, has infected over 80,000 people and killed upwards of 2,700.

Millions attend the hajj, which is set this year for late July through early August. Millions also travel to Saudi Arabia during the rest of the year to perform umrah, especially during the Muslim holy month of Ramadan, which will begin this year in late April.