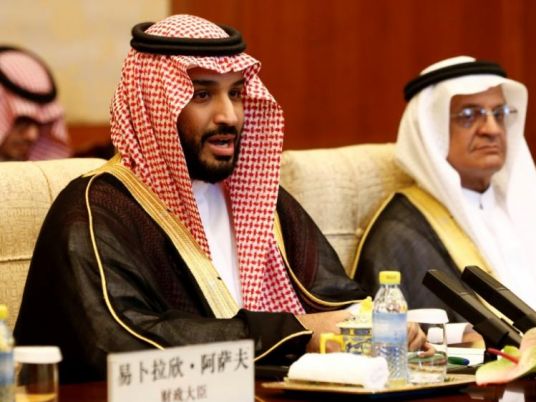 The young prince leading Saudi Arabia's drive for economic reform has laid out a three-pronged strategy to avoid a backlash from any religious conservatives opposed to his plan, according to remarks reported by Foreign Affairs magazine on Saturday.

Deputy Crown Prince Mohammed bin Salman, the 31-year-old overseeing the kingdom's biggest-ever overhaul of state and society, told visiting researchers last month punitive measures would be considered for any clerics who incited or resorted to violence over the plan, one of the researchers wrote.
Prince Mohammed said he believed only a small percentage of the kingdom's clerics were too dogmatic to be reasoned with, the journal reported, while more than half could be persuaded to support his reforms through engagement and dialogue.
The rest were ambivalent or not in a position to cause problems, he is reported to have said.
There was no immediate comment from the royal court.
Prince Mohammed has couched his "Vision 2030" reform plan to wean the kingdom's economy off oil in terms referencing Islamic tradition and has kept the focus on the economy, with scant concrete pledges of social change in the highly conservative kingdom.
But in a country that adheres to an austere brand of Wahhabi Sunni Islam, where gender segregation is mandatory and concerts and cinemas are banned, the plan's seemingly anodyne goals to empower women, promote sports and invest in entertainment are controversial.
Saudi Arabia's clerics offer legitimacy and public support to a king who styles himself the guardian of Islam's holiest sites. They retain control of the justice system but leave most other matters of governance to him, so long as his edicts do not contradict their interpretation of Islamic law.
The government started trying to rein in what it saw as extremist viewpoints in the clergy after Islamist militant attacks inside the kingdom began in 2003, pushing hardline clerics to renounce al Qaeda and violent tactics and sacking clerics seen as disseminating radical views.
In the later years of the reign of King Abdullah, King Salman’s predecessor, some senior clerics who opposed his cautious social reforms too openly lost their jobs.
(Reporting by Katie Paul,; Editing by William Maclean and Stephen Powell)