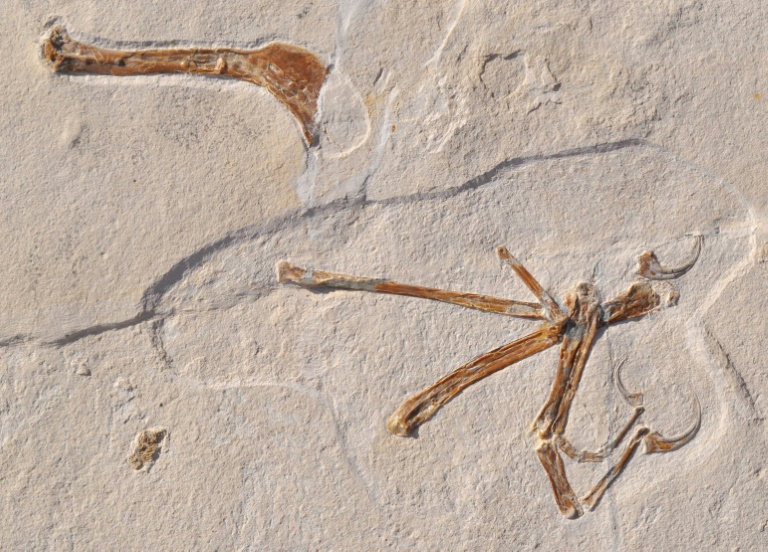 Researchers in Germany have unearthed a new species of flying dinosaur that flapped its wings like a raven and could hold vital clues as to how modern-day birds evolved from their reptilian ancestors.

For more than a century and a half since its discovery in 1861, Archaeopteryx — a small feathered dinosaur around the size of a crow that lived in marshland around 150 million years ago — was widely considered to be the oldest flying bird.

Palaeontologists from Ludwig-Maximilians University (LMU) in Munich and the University of Fribourg examined rock formations in the German region of Bavaria, home to nearly all known Archaeopteryx specimens.

They came across a petrified wing, which the team initially assumed to be the same species. They soon found several differences, however.

“There are similarities, but after detailed comparisons with Archaeopteryx and other, geologically younger birds, its fossil remains suggested that we were dealing with a somewhat more derived bird,” said lead study author Oliver Rauhut from LMU’s Department of Earth and Environmental Sciences.

They called the new bird-like dinosaur Alcmonavis poeschli — from the old Celtic word for a nearby river and the scientist who discovered the fossil, excavation leader Roland Poeschl.

The study, published in the journal eLife Sciences, said Alcmonavis poeschli was “the most bird-like bird discovered from the Jurassic”.

As well as being significantly larger than Archaeopteryx, the new specimen had more notches in its wing bones that pointed to muscles which would have allowed it to actively flap its wings.

Significantly, this “flapping” trait found in Alcmonavis poeschli is present in more recent birds, but not in Archaeopteryx.

“This suggests that the diversity of birds in the late Jurassic era was greater than previously thought,” Rauhut said.

The discovery is likely to fuel debate among dinosaur experts over whether birds and dinosaurs developed the ability to flap their wings from earlier gliding species.

“Its adaptation shows that the evolution of flight must have progressed relatively quickly,” said Christian Foth, from the University of Fribourg, and a co-author of the research.

Image: Bayerische Staatssammlung für Paläontologie und Geologie/AFP / OLIVER RAUHUT, OLIVER RAUHUT The notches in the wing bones of the new specimen point to muscles which would have allowed it to actively flap its wings

Strongest dinosaur ever, Tyrannosaurus rex., could bite with the force of three cars