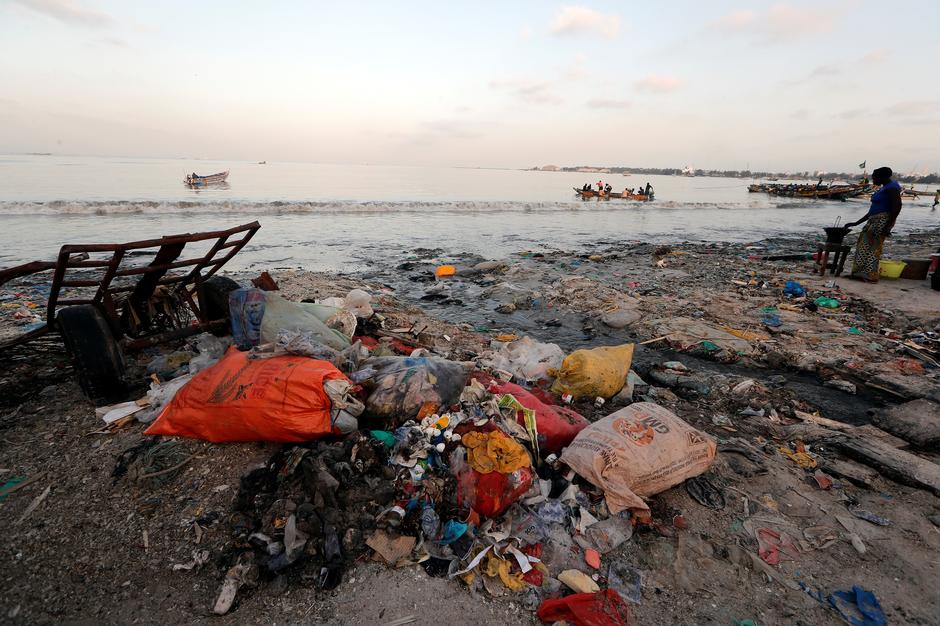 DAKAR (Reuters) – Tired of seeing Senegal’s seascapes spoiled by ever-growing mounds of cheap plastic bags, authorities plan to crack down on polluters by imposing fines and further restricting plastic use.

The West African country, whose beaches on the Atlantic attract tourists from all over the world, is one of the world’s biggest contributors to ocean plastic despite having a population of just 15 million.

A study in 2010, reported by the journal Science, put it 21st out of all nations for quantity of waste being dumped in the sea – with 254,770 tonnes, only just behind the United States, a vastly bigger economy with many times more people and coastline.

Across Senegal, plastic containers are strewn across roads, often with goats and cows feeding on them, while rubbish can be seen floating in the sea.

Globally, public awareness is growing about the harm being done by plastic, which hurts marine life and instead of biodegrading breaks down into ubiquitous microplastics.

According to science writer Mike Berners-Lee, of the nine billion tonnes of plastic ever produced, 5.4 billion has been dumped onto land or the sea – enough to shrink wrap the planet in clingfilm.

In Senegal, a 2015 law banned the most common thin polythene bags, but was never applied. Grocers wrap individual items, even blobs of cheese, butter and coffee in copious plastic.

“The law is not enforced. When you reach major cities, you are greeted by an unpleasant decor, a … visual pollution made of plastic waste as far as the eye can see,” Environment Minister Abdou Karim Sall told Reuters. “We will go around shops … we have security forces who can support us. We’re going to start enforcing this law in its full force,” he said.

Sall said the government would introduce a new bill in the coming months to ban a wider range of plastic, including thicker shopping bags, following similar moves in Kenya and Rwanda.

Environmental officers will hold public gatherings to inform people about the negative effects of plastics for health, fishing and farming, Sall said.

Then police will enforce a law which fines shopkeepers up to 50,000 CFA francs ($85) for distributing the bags, a lot for a country with a GDP per capita of $1,500, according to World Bank figures. Those manufacturing thinner bags risk six months in prison or 20 million CFA francs ($34,000) in fines.

Thirty-four African countries have tried to use laws to curb plastic use since South Africa banned plastic bags in 2003, according to the UN Environment Programme.

In 2017, Kenya imposed one of the world’s toughest bans on plastic bags, with up to four years in prison or $40,000 fines for producing, selling or even using them.

French supermarkets like Carrefour and Auchan also distribute plastic bags in Senegal, but as they are thicker the law doesn’t yet affect them.

Assietou Drame, spokeswoman for Auchan Senegal, said the supermarket aimed to “completely eliminate the sale of plastic bags” and offer paper bags instead. A Carrefour spokesperson said it normally gives textile bags but had temporarily run out.

A few Senegalese are meanwhile taking the initiative.

On Dakar’s Virage beach, restaurant owner Babacar Thiaw grew frustrated with seeing his employees rake the beach every morning only for the waste to return hours later.

“Look at the beach, how beautiful it is, but at 1 p.m., 2 p.m., you come back and it looks like a dumping ground because people bring … their plastic and they throw it anywhere,” Thiaw said.

He decided to go “zero-waste”, replacing plastic straws with metal ones, and by Aug. 1, reuseable glass bottles will replace plastic ones and ground coffee beans will be in capsules.

“I told myself: I’ll start doing something today that can inspire people tomorrow,” he said.

Image: A street vendor is pictured beside plastic waste at a fishermen port on the outskirts of Dakar, Senegal July 26, 2019. REUTERS/Zohra Bensemra