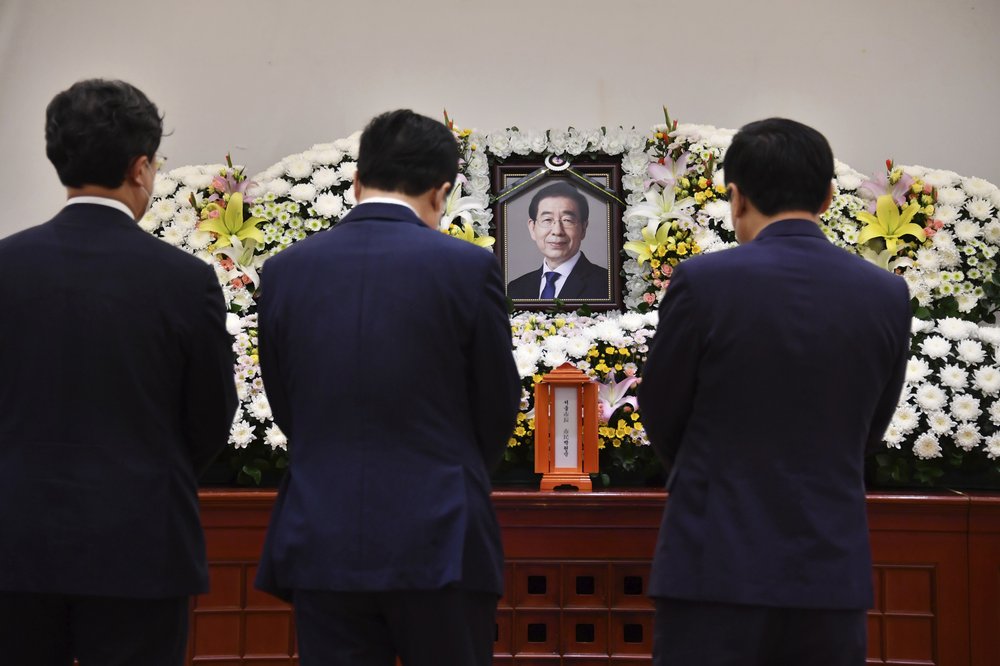 Mayor Park Won-soon had been found dead in wooded hills in northern Seoul hours after his daughter reported to police he had left her a “will-like” verbal message and disappeared. His body was found after hours of searching near the last location of his phone. Police said there were no signs of foul play at the site but refused to disclose his cause of death.

A mourning station was set up at a hospital to receive mourners for five days. Some politicians and civic activists visited the hospital to pay respects to Park. His funeral is to be held next week.

Seoul government officials said Park canceled his scheduled appointments and did not come to work Thursday without explanation.

South Korean media including SBS television network reported Thursday night that one of Park’s secretaries had lodged a complaint with police on Wednesday night over alleged sexual harassment for an extend period.

Police later confirmed that a complaint against Park had been filed but cited privacy issues in refusing to elaborate, including on whether the complaint was about sexual behavior.

Seoul’s city government said a note left by Park was found at his residence.

“I feel sorry to all people. I thank everyone who has been with me in my life,” the note shown on TV said. It continued with a request his remains be cremated and scattered around his parents’ graves.

The US Ambassador to South Korea, Harry Harris, expressed his sadness at Park’s death. “My condolences to his family and to the people of Seoul during this difficult time,” his tweet said.

Park, 64, was a longtime civic activist and human rights lawyer before he was elected Seoul mayor in 2011. He became the city’s first mayor to be voted to a third term in June 2018. A member of President Moon Jae-in’s liberal Democratic Party, he had been considered a potential presidential candidate in 2022 elections.

Park led an aggressive campaign to try to prevent the spread of the coronavirus in the city of 10 million people, shutting down thousands of nightspots and banning rallies in major downtown streets.

But the capital has become a new center of the outbreak in South Korea since the country eased its rigid social distancing rules in early May. Authorities are struggling to trace contacts of infected people as clusters arise in a variety of places.

Image: In this photo provided by Seoul Metropolitan Government, a portrait of the deceased Seoul Mayor Park Won-soon is placed at a hospital in Seoul, South Korea, Friday, July 10, 2020. Park left a note saying he felt “sorry to all people” before he was found dead early Friday, officials in the South Korean capital said as people began mourning the liberal legal activist seen as a potential presidential candidate. (Seoul Metropolitan Government via AP)