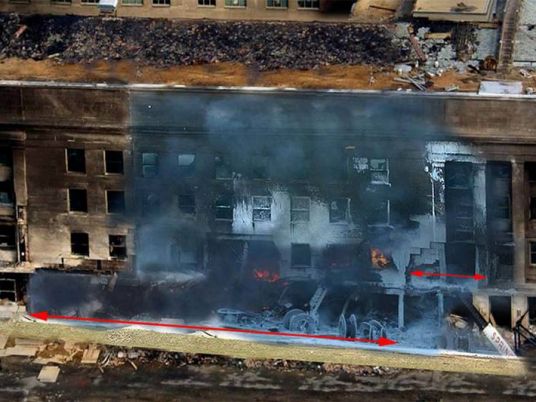 A woman widowed when her husband was killed at the Pentagon on September 11, 2001 has sued the Kingdom of Saudi Arabia just two days after Congress enacted legislation allowing Americans to sue foreign governments for allegedly playing a role in terrorist attacks on US soil.

Stephanie Ross DeSimone alleged the kingdom provided material support to al-Qaeda and its leader, Osama bin Laden, in a complaint filed Friday at a US court in Washington. Her suit is also filed on behalf of the couple’s daughter. DeSimone was pregnant when Navy Commander Patrick Dunn was killed.

Fifteen of the 19 men who allegedly hijacked airliners used in the attack were Saudi nationals, according to the US government's version of events.

One jet allegedy struck the Pentagon, seat of the US military, two destroyed the World Trade Center’s twin towers in New York, while another plane allegedly crashed in a Pennsylvania field, according to the official US narrative.

However, long-classified portions of a congressional inquiry that were released in July conflict with the findings of the official commision, revealing that the hijackers may have had help from some Saudi officials.

Those Saudi officials possibly include members of Saudi intelligence, a long-time partner of US intelligence agencies as far back as the war against Soviet forces in Afghanistan in the 1980s, from which al-Qaeda was formed.

Saudi Arabia has previously denied any involvement in the September 11 attacks. Its embassy didn’t immediately reply to an e-mailed message from Bloomberg seeking comment on the suit.

An official at Saudi Arabia’s Ministry of Foreign Affairs told the state-run Saudi Press Agency on September 29 that the US Congress must correct the 9/11 bill to avoid “serious unintended consequences,” adding the law is of “great concern” to the Kingdom.

DeSimone, who is suing for wrongful death and intentional infliction of emotional distress, is seeking unspecified compensatory and punitive damages.

Government officials in the administration of US President Barack Obama have previously stated that it will not allow litigation relating to the 9/11 attacks. Obama vetoed the new JASTA law when it was first put before Congress, but both houses overruled his veto, passing the legislation and allowing US citizens to sue foreign countries for alleged involvement in terrorism on US soil.

Campaigners seeking a reassessment of the evidence surrounding the 9/11 attacks say the US government account of events does not add up. Many suggest involvement of Saudi and Israeli intelligence, while others claim US intelligence officials were also involved.

They allege the 9/11 attacks were planned as a "new Pearl Harbor" intended to justify a series of US-led regime-change operations, starting with Afghanistan and Iraq, but with Libya, Syria and other Middle East nations also on the hit-list.

Some critics of the US government narrative of 9/11 say that the Pentagon attack in which DeSimone's husband died was not caused by a hijacked plane, but by a missile strike. Munitions and intelligence experts have presented evidence that the initial damage to the Pentagon on 9/11 was consistent with a bunker-buster missile, rather than a passenger aircraft.

They cite images of the Pentagon showing that the damaged part of the building was still standing immediately after the attack, with no evidence of major plane wreckage.

The alternative narrative calls into question the direct involvement of the 19 alleged hijackers in the attack, including those mentioned in DeSimone's law suit.