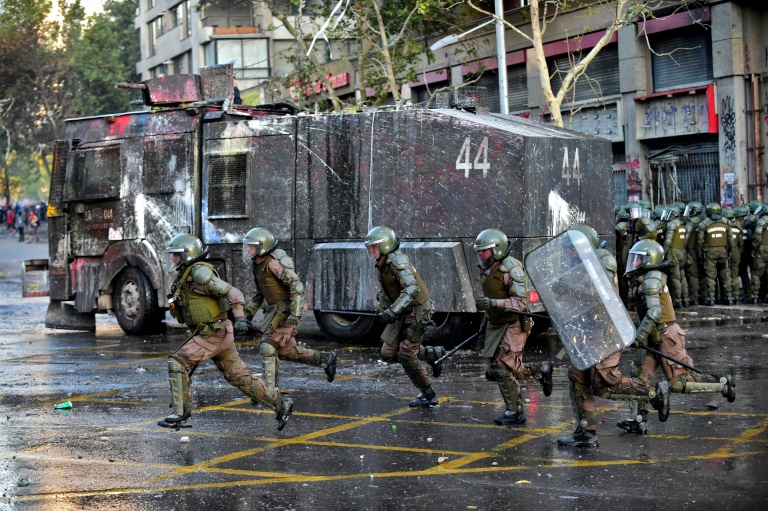 HRW said the police, known as Carabineros, “committed serious human rights violations, including excessive use of force in the streets and abuses in detention,” during the protests.

The New York-based right group had received hundreds of disturbing reports of abuse, including cases of beatings and sexual assault, Jose Miguel Vivanco, HRW’s director for the Americas, told a press conference in Santiago.

“We believe that the abuses are not isolated cases, they are not coincidences,” said Vivanco.

The rights groups said in a statement it met with President Sebastian Pinera in Santiago on Tuesday, recommending a series of reforms to help prevent police misconduct.

The reforms were needed “in the wake of compelling evidence of excessive use of force and abuses against demonstrators and bystanders.”

Among its recommendations is a thorough reform of the Chilean police, including reviewing detention protocols for identity checks, setting up internal control mechanisms and strengthening police training.

“We recognize the value of the Human Rights Watch report and the recommendations that have been made to us,” said Lorena Recabarren, the Chilean minister with responsibility for human rights.

She said the findings “concern us and, of course, are ones we receive with pain.”

Meanwhile university student Gustavo Gatica became the first demonstrator to be left fully blind after being hit in the eyes by pellets fired by riot police on November 8 during a protest in Santiago.

Gatica’s case has become a symbol among the more than 200 demonstrators who have suffered eye injuries — often resulting in being blinded in one eye — from rubber bullets and pellets fired by riot police.

Due to the high number of injuries and pressure from humanitarian groups, police said they would stop using such weapons.

Meanwhile violent demos continued in Chile’s main cities, with looting and burning reported in places like La Serena and Iquique in the north, and San Antonio and Valparaiso, in central Chile.

In Santiago, thousands gathered for a march downtown that riot police eventually broke up by deploying water cannons.