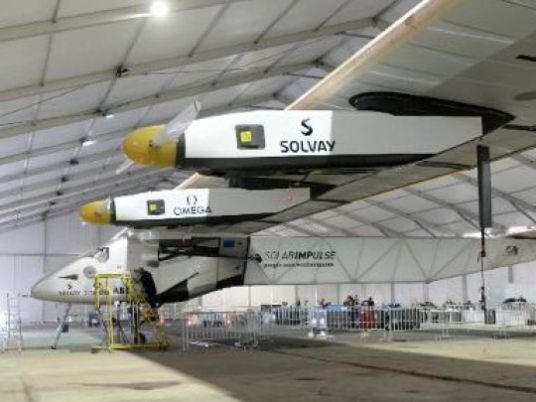 Solar Impulse 2 took off Wednesday from the city of Ahmedabad for its next destination in India, as it bids to become the first solar-powered plane to circumnavigate the globe.
The plane's departure from the western Indian city, where it landed last Tuesday from the Omani capital Muscat, was delayed by three days due to poor weather.
The aircraft, flown by Swiss pilot Andre Borschberg, is now headed to the Indian holy town of Varanasi for a short stopover before leaving for neighboring Myanmar.
It is expected to touch down in Varanasi at around 1530 GMT Wednesday.
Muscat was the first of 12 planned stops on the plane's journey around the world from Abu Dhabi, with a total flight time of around 25 days spread over five months.
The sea legs pose the greatest challenge for the Solar Impulse team as any loss of power over the water would leave the pilot no alternative but to bail out and await rescue by boat.
Much bigger crossings lie ahead for Borschberg and co-pilot Bertrand Piccard as they traverse the great oceans in the single-seat aircraft.
The longest single leg will see one of them fly solo non-stop for five days and nights across the Pacific from Nanjing, China, to Hawaii — a distance of 8,500 kilometers (5,270 miles).
The plane's maiden leg last Monday took Borschberg 13 hours and two minutes, while Piccard's flight to Ahmedabad of 1,468 kilometers (912 miles) was hailed as the longest point-to-point distance flown by a solar-powered plane.