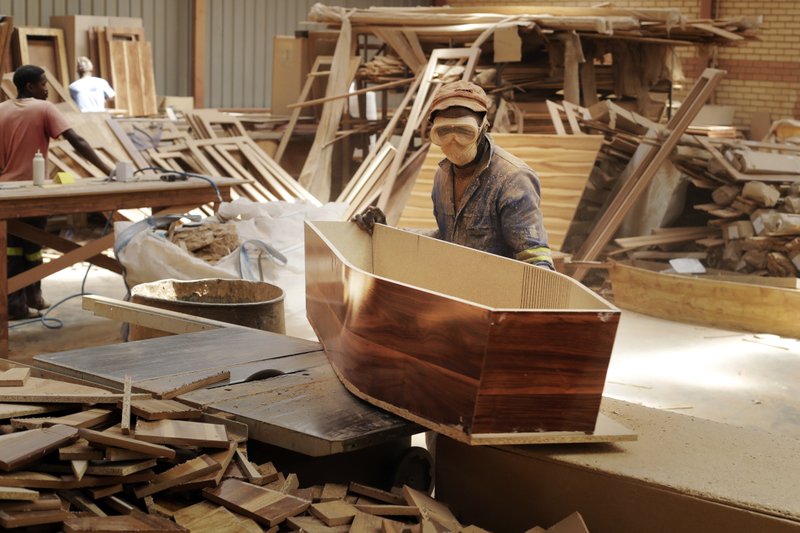 JOHANNESBURG (AP) — The coffin-maker knew death too well. The boxes were stacked in his echoing workshop like the prows of ships waiting for passengers. COVID-19 was turning his business upside down.

Then it moved into his home.

Casey Pillay’s wife was a midwife, delivering babies for coronavirus-positive mothers in Johannesburg, the epicenter of the pandemic in South Africa — once fifth in the world in number of cases — and on the continent.

That she would be infected, they knew, was a matter of time.

When she fell ill during the country’s surge in cases, she retreated to the main bedroom. Pillay withdrew to a bedroom next door. Scared, he barely slept, managing a few hours before dawn as his wife wrestled with some of the worst days of her life.

“I’d literally be on eggshells listening to what she was going through,” Pillay said Tuesday. “I would go in every now and then, fully kitted up, just to check vitals, whether she needed oxygen. When she recovered, we sat down and had a chat. She was really scared because at one stage she thought she was gonna die.”

It was a blessing in disguise, he said, to see someone with COVID-19 recover after so much exposure to death through his work.

Pillay, a manager at the coffin-making business, said about 10 colleagues also were infected. All are now OK. Their survival reflects the relatively low death toll from COVID-19 in South Africa, and in Africa in general, as the continent appears to defy dire predictions that the virus would cause massive numbers of deaths.

Life has edged back toward normal after a surge in infections in South Africa in June and July that threatened to overwhelm public hospitals. Many of the more than 1 million graves that Gauteng province, home of Johannesburg, once hurriedly mapped out have gone unused.

Still, the toll from COVID-19 — which has killed more than 16,000 people in South Africa, nearly half of the continent’s over 35,000 deaths — has been painful, and the world surpassing 1 million confirmed deaths has again led to reflection.

The need for coffins rose and fell as South Africa’s lockdown levels changed, but overall, he said, “business went down.”

Under the strictest lockdown measures, so few people were driving in South Africa that the country’s terrible rate of vehicle deaths plummeted. And alcohol sales were banned, “so you weren’t having people fighting, murdering each other,” Pillay said. “Unfortunately, our whole business thrives on people dying.”

As the lockdown eased step by step and people were “not being disciplined” and going around without masks, the number of virus deaths increased. Now, a sense of normalcy is returning.

Pillay scrambled to keep his workshop open and safe as orders rolled in. “The unfortunate part is, you’ve got so many workers and machines and can only do so much a day,” he said. The workshop bustles with people carrying raw wood, sanding it and attaching polished handles.

And the entire nature of mourning in South Africa changed. The government said COVID-19 burials should happen right away instead of waiting for the usual weekend funerals.

“You had undertakers who now needed boxes on Monday, Tuesday, Wednesday,” Pillay said.

A body now had to fit into three body bags, then the coffin, and “go straight into the grave.”

With the number of people limited at funerals and graveyards, “people went for the cheapest boxes,” Pillay said. In normal times, even the poorest of the poor in South Africa “want to do the best, a kind of show-off thing, a bragging right for them” with quality coffins for their loved ones.

Now, there is little time to appreciate it, and few people to impress. Sometimes, mourners could only park on the side of the road and watch the vehicle carrying the body drive by.

Pillay believes that the beginning of the Southern Hemisphere’s summer, along with South Africans’ relative youth and the perceived resilience of immune systems, will help his countrymen survive the next wave of infections that health experts are expecting.

Again, it’s when, not if. Pillay already is watching cases rise again in Britain, in Spain.

Image: A worker constructs coffins at Enzo Wood Designs, in Johannesburg, Wednesday, Sept. 30. 2020. Casey Pillay, a coffin-maker in South Africa, watched the coronavirus pandemic turn his business upside down. For Pillay, the need for coffins rose and fell as South Africa’s lockdown levels changed, but overall, he said, “business went down.” As the world surpasses 1 million deaths, Africa is bracing for a likely second wave of infections. (AP Photo/Themba Hadebe)

Progress against virus brings complacency in parts of Africa