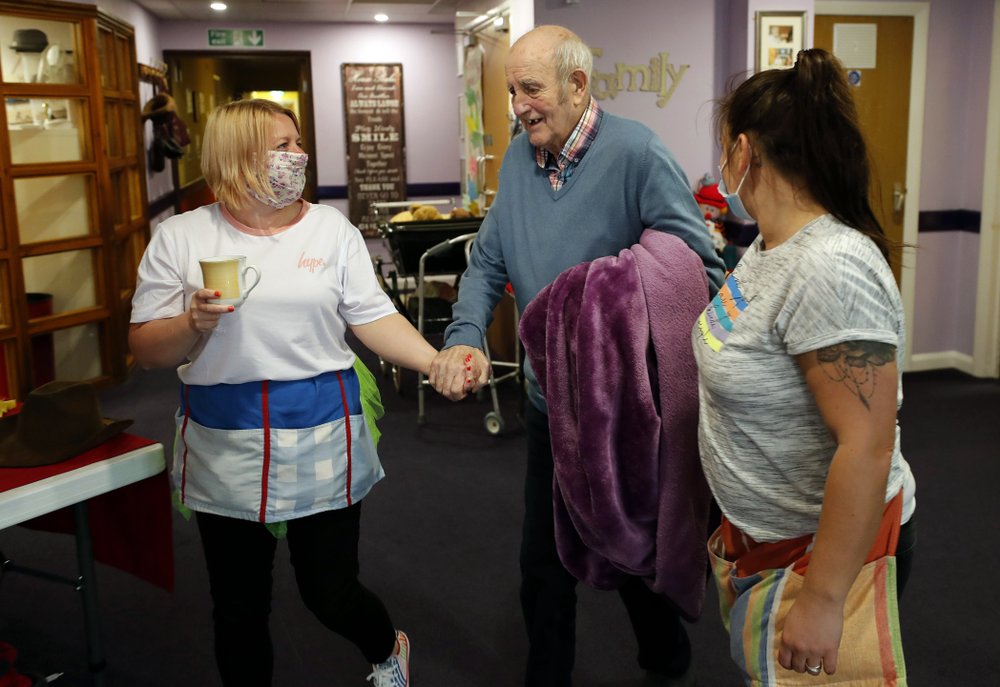 SELSTON, England (AP) — Lucy Dawson is haunted by a sense of powerlessness.

The nurse has equipment to treat the residents of the nursing home where she works when they become sick with the coronavirus — but it doesn’t seem to make any difference.

“We’ve got fluids, or we’ve got oxygen on the go. You know, you name it, we’ve got it,” said the nurse at Wren Hall, a small home for elderly people with dementia in the central England village of Selston.

But still, “it’s bereavement after bereavement,” said Dawson, who has worked at the home for two decades. “We’re losing people that we’ve loved and looked after for years.”

The coronavirus pandemic is taking a huge emotional and physical toll on staff in Britain’s nursing homes, who often feel like they’re toiling on a forgotten front line.

The virus is sweeping like a scythe through Britain’s 20,000 care homes and has left thousands of elderly people sick and dead. At Wren Hall, 12 of 54 residents died in three weeks after contracting COVID-19.

“To be putting your heart and soul into nursing somebody to sustain life, it’s just a massive devastation when …,” Dawson trailed off. “I’ve just got no words.”

It’s a tragedy being repeated across the UK and around the world. While the coronavirus causes mild to moderate symptoms in most who contract it, it can result in severe illness in some, especially older people.

Britain’s official tally of almost 19,000 coronavirus-related deaths — including at least 15 nursing home workers — counts only those who died in hospitals. Official statistics show over 1,000 more virus-related deaths in homes in England and Wales up to April 10. In Scotland, which keeps separate records, a third of virus deaths have been in homes for the elderly. It is likely that all of these counts are underestimates. The World Health Organization says up to half of COVID-19 deaths in Europe may be in nursing homes.

Each death is felt painfully at Wren Hall, a homey, close-knit place bedecked with cheerful signs — “Happiness is not a destination, it is a way of life” — where many residents and staff have lived for years.

“There’s some people in this building who I see more than my actual family,” said nursing associate Damian Mann, who has worked at the home for 11 years.

He said the outbreak had left him feeling “helpless.”

“You start to question yourself, I think, as a professional,” he said. “You come in every day and someone is dying every day that you’re here. It’s not normal for that to happen […] in this setting. So we look back and we think, is there anything we could have done?”

That frustration is compounded by physical barriers — masks, gloves and plastic aprons — and by the need to keep families away from sick relatives.

In such extreme circumstances, even a kind act can elicit pain. Care assistant Pat Cornell made cards with residents’ photos to send to family members unable to visit in person.

“The sad part is, I sent one on Friday, and the lady died on the Saturday,” Cornell said. She’s haunted by the thought that the bereaved family will be upset all over again when they get the card.

The emotional strain is intensified by a feeling among many staff — often poorly paid — that they have been overlooked. When the government offered health care workers tests for the virus, nursing home staff were not included. Homes for the elderly were also low down the pecking order for personal protective equipment, as authorities scrambled to meet the demand from hospitals.

“It was like we were the forgotten people, the people in the care homes and the staff in the care homes,” said Sally Bentley, who has worked at Wren Hall for nine years. “Like we’re expendable, really, I suppose.”

Wren Hall’s owner-manager, Anita Astle, went on TV earlier this month in desperation, seeking more protective gear. She found that suppliers had hiked their prices as much as sixfold.

Since then, the home has received donations from local people and businesses, but Astle says some items, especially gowns, are still scarce.

She said the role nursing homes are playing in the pandemic has not been fully recognized.

“People with and without COVID-19 are being discharged from hospitals to care homes to free up [hospital] beds,” she said. “We are being asked to do things in care homes that we’ve never been asked to do before, [like] verification of death.”

The British government, stung by criticism of its handling of the outbreak, has announced that nursing home staff, along with health care workers, can now be tested for the virus at drive-thru centers and mobile sites. But Astle says so far she has not managed to get anyone tested — even though more than half of Wren Hall’s 142 staff have showed symptoms at some point.

For now, the staff are coping as best they can. They are encouraged that some residents who have been sick in the home’s “red zone” are recovering and leaving isolation.

But Mann worries about the lingering toll.

“The impact that it’s having on the team, even though they’re soldiering on through,” he said, “The long-term effects of it are going to be massive.”

By JO KEARNEY and JILL LAWLESS

Image: In this April 20, 2020, photo, nurses guide a resident at Wren Hall nursing home in the central England village of Selston. The coronavirus pandemic is taking a huge emotional and physical toll on staff in Britain’s nursing homes, who often feel like they’re toiling on a forgotten front line. The virus is sweeping like a scythe through Britain’s 20,000 care homes and has left thousands of elderly people sick and dead. (AP Photo/Frank Augstein)

Struggle, fear and heartbreak for medical staff on virus frontline