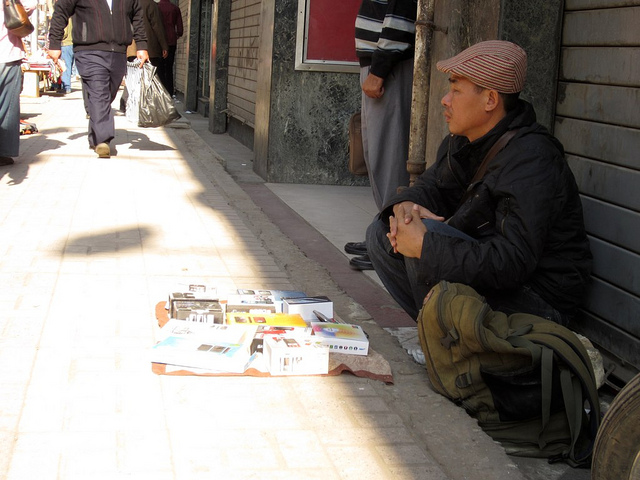 The taxi driver in "Fool Al Seen Al Azeem" (The Great Bean of China), a famous Egyptian comedy set in China, repeatedly screams “Bu Yao!” — Chinese for “no” — into his phone before throwing it away for comic effect.

Yi Fan, a Chinese Muslim who works at a restaurant in Abbasseya, finds it frustrating when Egyptians scream this catchphrase at him on the street. He is even more annoyed when they press their hands together and emulate the traditional East Asian head bow in front of him.

“I try to correct them that we are Muslim and we don't do this,” he says.

Such is the typical interaction between Egyptians and Cairo's Chinese residents, who in reality are nothing like the stereotypes portrayed in the film. Members of the Chinese immigrant community work as street vendors, traditional healers, and telecommunication specialists. They study Arabic and Islam, and live in all different neighborhoods of Cairo. Yet for all of their diversity, Cairo's Chinese feel estranged from Egyptian society.

“Egypt is not a country for immigration,” says Mary Lai, an investment consultant from Hong Kong working in Cairo. The immigrant population — over half of whom are refugees from other African countries — has declined from 0.5 percent of Egypt's population in 1975 to 0.2 percent in 2005.

Aside from its small Coptic Christian minority, Egypt is about 90 percent Muslim. Most Egyptians have very little contact with or knowledge of East Asian cultures, as the country's Chinese population — which Lai estimates at about 10,000 — mostly lives in insular enclaves in Cairo.

“Every day, when I have a crowd around me, some people try to steal my mobile phones,” says Fu, who sells mobile phones just off Talaat Harb Square. “I feel that Egyptians treat foreigners badly.”

Fu, who refuses to give his real name for fear of a backlash from the Egyptian authorities, works illegally on a two-month tourist visa. He lives with family and friends — all from the southeastern province of Fujian — in Nasr City.

In addition to what he feels is poor treatment by Egyptians, Fu has found it difficult to make money.

“But I spent so much money coming here, it's too late to regret,” he says.

Curious passersby form small crowds around the street vendors. The prospective buyers shout out prices much lower than the sale prices, but not once during the roughly 10 interviews I conduct do I see anyone purchase a phone.

Huang Kang, a 21-year-old street vendor, also from Fujian, has been here since January. He sits on a two-foot high green spring-chair leaned up against the side of a building, wearing a khaki-colored hat, dark plaid shirt, and brown pants. Eight mobile phone boxes are laid out in two rows of four in front of him.

Huang also has difficulty earning a living. He says he averages about one to two phone sales a day and makes only about LE2000 a month. He is disappointed, claiming he could make between LE8000 and LE10,000 doing the same thing in China.

Right before we spoke, a commotion erupted across the street between Huang and an angry Egyptian man; police officers got involved. Huang says that the man claimed to have bought a defective mobile phone from him. After a street-side adjudication, Huang was exonerated.

“I find Egyptian people very compassionate, very kind, very helpful,” he says. “Back in China, if foreigners have a problem, most Chinese people won't help them. But here, 90 percent of Egyptians will.”

Su Jun Rong, who runs a traditional Chinese healing clinic out of her apartment in Maadi, says the street vendors I interviewed are relatively well off. She explains that the poorer street vendors are from northeastern China and sell clothes door-to-door. Some of them have lived here nearly 10 years, she says.

“The street vendors come due to the pressure of life to find a way of living,” Su says. “They are really hard-working.”

When my translator and I first arrive at Su's office, we are swiftly ushered in and seated on the couch without saying a word. Afraid of needles, I blanch at the sudden fear that she is going to stick me full of them, a terror only exacerbated as she slips her arms through the sleeves of her white lab coat.

I'm quickly reassured that Su is going to see another patient, though posters of bodily pressure points that adorn her office leave me a little nervous.

Su, who is in her sixties, belongs to an entirely different class of Chinese living in Cairo. She worked as a professor at a Chinese university for traditional healing for 40 years. Originally hoping to come to Cairo so she could more easily obtain a visa to lecture in Germany, her plans fell through and she quickly took advantage of what she saw as a vacuum of proper traditional healing.

“When I got here, I realized there were no other authorized therapists. When I saw how they worked, I realized it was bad,” she says.

Su tells me she treats China's ambassador and embassy staff, the head of China's leading newspaper Xinhua, the head of the China Development Bank in Cairo, and employees of the Chinese corporations ZTE and Huawei.

She also treats her baweb. “He only makes LE300 a month, so how can I take money from him?” she asks without a hint of smugness, before adding that she also treats Chinese street vendors pro bono.

Su's success in Egypt disguises a more pressing issue: her practice's legal status. As the Egyptian government doesn't recognize Chinese traditional healing as a legitimate form of medical treatment, she will need to hire a lawyer to get properly authorized. Given the uncertain political situation, Su is loath to invest in that just yet.

Tina Jin is eating with friends at a restaurant downstairs from Su's practice. The restaurant has a family atmosphere; no one leaves tips, and Maadi's Chinese residents often congregate there at dinnertime to socialize.

Jin, who is Muslim, lives in Maadi with her family and works at a Chinese technology import and export company. She has been here for five years and raised her family in Cairo.

Her co-workers “just come here for a business trip and then go back home,” Jin says. Their Chinese companies rent three-room flats for them on the same streets in Maadi, effectively insulating them from the rest of Cairo. Like most of her colleagues, Jin has no interest in getting dragged into revolutionary politics.

“In our culture, we appreciate peace and harmony,” she says. “And we don't try to get into trouble.”

Lai recalls that most Chinese restaurants and companies remained opened when Cairo closed down during the 18-day uprising earlier this year.

“That's the Chinese culture,” she says. “We look for opportunity.”

Jin estimates that roughly half of Cairo's Chinese are Muslim, many of whom obtain student visas to study Islam at Al-Azhar University, the Muslim world's preeminent institution of Islamic learning. Students like Yi, the Chinese server working in Abbasseya, are grateful for the opportunity.

“For Chinese Muslims, studying at Al-Azhar is like a dream,” says Yi, who studies Arabic there. “I still feel like I'm living a dream.”

The restaurant where Yi works is located in the heart of Abbasseya's small Chinese community, a quiet neighborhood of sloping streets bracketed by dull, concrete buildings. Chinese patrons arrive in large groups and quickly dispatch massive piles of noodles, rice and beef. Yi and the other waiter, whom Yi calls his “brother,” periodically read from the Quran throughout our meal.

The Chinese I interview all betray wistfulness for their homeland. For Yi, this has been reinforced through his deeper understanding of Islam.

“As a Muslim, we have to follow two things: the Quran and the Hadith,” he says. “And the Hadith says we must love our country first.”